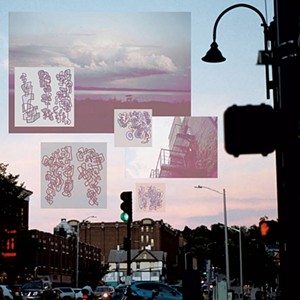 Burlington-area hip-hop producer Es-K has churned out jazzy, dusty boom bap instrumentals of rare refinement for more than a decade. His evolution has been incredible: Somehow, he is able to increase the quantity of his output while simultaneously raising the bar on his quality control. Beat tape About This is Es-K's latest release, but that may change by the time this review hits print. Two months into 2022, he's already put out four projects.

In fact, this year may turn out to be his most prolific yet. In addition to a constant schedule of new beat tapes, he's also working on three collaborative albums: reconnecting with Los Angeles artist Chel Strong, exploring new worlds with keyboard virtuoso Danny Whitney and creating a "straight boom bap" LP with Norwegian producer Type.Raw.

Reducing that kind of work ethic into a tidy bio is perhaps impossible. It's also necessary, because all that work is inseparable from Es-K's latest album. Ten years ago, the producer kicked off the first "episode" of his Spontaneous Grooves series on Los Angeles-based label Cold Busted. Over two years of monthly releases, Es-K amassed more than 300 beats, not to mention fans around the world. While that was only the beginning of his massive catalog, it was also the crucible through which he forged his workflow and style.

A careful composer with an ear for the subtle touches that give music life, Es-K is as much Dr. Dre as J Dilla. Some of the strongest gems on his résumé are albums he has executive produced, including two collaborations with Smif-N-Wessun MC General Steele, Rebirth of the Slickest with Bucktown USA Entertainment artist VVS Verbal and, of course, 2019's Thought Instruments with Learic of the Aztext.

His proudest accomplishment to date, however, is his cowriting credit on "Let It Reign," the opening track of Temptations 60, a brand-new album by R&B legends the Temptations. Featuring New York rapper K Sparks, it's an electric moment, bridging doo-wop and hip-hop.

As Es-K's sound has matured, his range has expanded. His early tapes were simply collections of dope beats, but his recent releases are calculated, cohesive works of art. While About This has a kaleidoscope of grooves on display, everything is distinctly cinematic, a movie soundtrack with a thumping low end. From the James Bond intrigue of opener "Social Studies" to the melancholic percussion of outro "Know Not No," all the tracks are strongly evocative.

If you're new to the world of Es-K, About This is a superb introduction. If you love it, I'd recommend the sprawling Trust the Process next — or maybe his NINETOFIVE label debut, Koan, which Bandcamp's Max Bell selected as one of the Best Beat Albums of 2018.

Still, it's a testament to Es-K's craftsmanship that any release he drops is going to impress new listeners and satisfy longtime fans. If his catalog didn't have so much soul, you'd swear the man were a machine.

About This by Es-K is available at es-k.bandcamp.com.

Speaking of Es-K, About This

Album Review Es-K About This