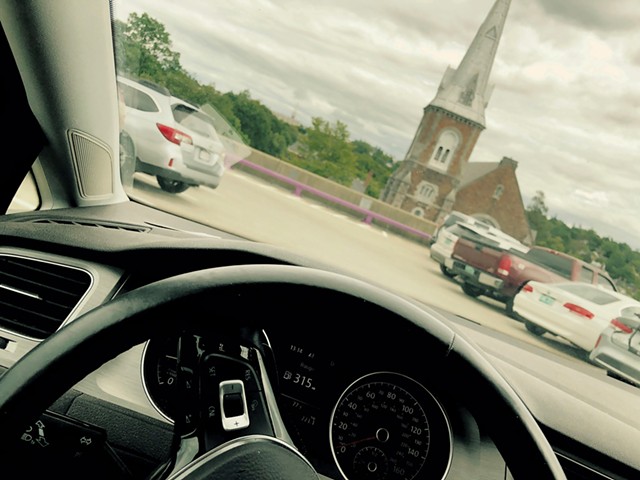 While Miller has yet to see the Ring live — people wait years for tickets to the Bayreuth Festival, where she hopes to see it — the work has always loomed large in her consciousness. It's only slightly surprising, then, that the latest project of this visionary site-specific performance artist and choreographer is based on Wagner's opera cycle.

Why surprising? Because AutoBiography: A Car Opera in Five Acts is, as its title suggests, about cars: their roles in our lives, the possibilities and limitations they represent, the memories they evoke. Yet, just as Wagner conceived the Ring as a Gesamtkunstwerk — a "total work of art," unifying all the arts in one opera — Miller will use cars to create an immersive experience. AutoBiography involves all five senses as it leads audiences through the five levels of Burlington's Marketplace Garage. Oh, and that downtown parking garage will remain operational for the public throughout.

The experience is guaranteed to be like nothing audiences have ever encountered and, at the same time, likely to trigger every car-related memory they have.

On Sunday, November 4, any time between 1 and 7 p.m., people can stop at Handy's Service Center next to the garage, buy a program for $3 (which also serves as a coupon for a free coffee at Lucky Next Door on Cherry Street) and take an approximately hourlong self-guided tour of the large-scale performance installation.

"It's like a road trip," says Miller. "You have your road map; you dress comfortably. It's about how you travel. Some people just want to get there — you can run through it in 15 minutes and go get your free coffee — and some want to look at the scenery."

To create AutoBiography, which is coproduced by Burlington City Arts, Miller collaborated with more than 30 sculptors, composers, musicians, dancers, photographers, city officials and others. Key collaborators are sculptors Aaron Stein and Lydia Kern, IT consultant Leif Hunneman, and the staff of aroma "apothecary" Alice & the Magician.

Opera singer Annalise Shelmandine will perform in a stairwell, but the soundscape also includes blues bands, folk musicians and an a cappella group singing inside a Toyota Camry.

Miller has divided the experience into five "acts," each inspired by one of the Ring Cycle's operas and exploring a different facet of car culture. Wagner's Das Rheingold addresses the lure of luxury. In Die Walküre, decisions are made about who lives and dies. The eponymous hero of Siegfried must acknowledge his blind spots before putting his father's broken sword back together, and the gods perish altogether in Götterdämmerung.

Miller split that last opera into two acts. "That's when everything goes to pieces, and no one comes out on top. We're all in this together," she says, adding that the fifth act occurs in and around a minivan.

Self-guided audience members will likely spot people inside some cars. These audience members belong to a group who reserved tickets back when the show was conceived as an experience for a limited audience. (Miller later decided to open it to the public.) In Act I, which explores the lure of the shiny new car, these "invited audience members" will serve to heighten the scene's theme of desirability. But no one need feel excluded: Most of the videos and scents that the invitees find inside the cars will be available for everyone to experience at Lucky Next Door.

Long interested in doing a piece on cars, Miller recognized a potential collaborator for AutoBiography in Stein after seeing his process sculpture "The Big Hit." The work consisted of a car he outfitted gradually over the summer of 2014 for a demolition derby. Stein subsequently drove it in the Champlain Valley Fair derby and submitted the wrecked result to the South End Art Hop's juried show. The piece won first prize for outdoor sculpture.

Miller, who is devoted to the collaborative process, had long discussions with Stein about the complex role of cars in our culture and how to distill that into specific scenes, she recalls. Stein storyboarded the project, found many of the 20-odd cars used in the piece and made 3D drawings of the proposal in situ that went to the city for safety approval.

"I've majored in cars since I was 2," jokes Stein, whose work, including license-plate sculptures, explores the culture's love-hate relationship with car consumerism.

Miller found a few cars on her own, including a trash-strewn Subaru Impreza on Facebook Marketplace. She and Stein drove to central Vermont to purchase it in cash and had AAA tow it back to Burlington. They kept the trash in place.

One of Miller's earliest car memories is of riding from Marktoberdorf, where she lived until age 6, to Neuschwanstein in her parents' old Volkswagen Beetle. The combined smells of the car's exhaust and heating systems assailed her until, on arrival, the castle's magical-seeming architecture took over her senses.

While based on her own experiences, Miller's project is meant to inspire viewers' memories and awareness of car culture without offering judgments, she says.

That pursuit of an open, collaborative audience element characterizes much of her work. In June, she produced Output/Input, an installation in a small room off Burlington's Maglianero Café. Collaborating with design studio Alder, Miller lined the floor with grass sod, installed a computer on one wall and asked visitors to input their reactions to instructional cards. (One read, "Take a big step to the right then take a big step to the wrong.") For Between Land and Water, which took place on the Burlington waterfront in 2016, the audience wore life jackets and walked the Community Sailing Center dock to remain as close as possible to the 40-odd kayakers, paddleboarders and dancers who participated in the performance.

AutoBiography is taking place not a moment too soon, in Miller's view.

"We're at the cusp of cars as we know them," she says, citing increasingly frequent predictions that the auto industry is moving toward electric power and car ownership will one day be obsolete. "Ten years from now, this will be a historic piece. It's important to understand where we've been."