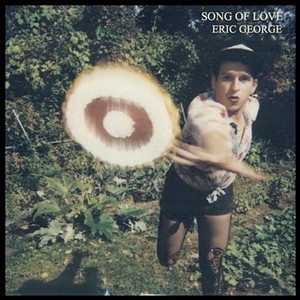 Burlington singer-songwriter Eric George is known for his acoustic folk, country and Delta blues-style tunes. On Song of Love, his sixth musical release since 2015 and second in the last six months, the Queen City troubadour pulls a Bob Dylan by going full-on electric.

George, who leads Radio Bean's Honky Tonk Tuesday house band, Ponyhustle, describes this seven-song collection as his "very first punk record." Perhaps the music should be qualified as elevated punk. It's not a stretch to say this multi-instrumentalist is a stronger player than Sid Vicious or any number of throwback punks whose zero-fucks-given attitudes outshone their musical ability.

Though written, played, sung and recorded by George alone, the songs prickle with the energy and drive of a live band. This could be due to the fast-and-loose approach he took to the project, writing and recording a song a day in a studio he assembled in his native Sharon, Mass.

George establishes the album's punk ethos in its snarling opener, "Song of Love." Here he serves some serious sarcasm in a dead-on description of a big-fish musician stagnating in a small pond: "You know me honey, you've seen my face / I've done a few interviews / I play here every Friday night / The cooks all give me great reviews."

Not one to shy away from the issues of the day, George tackles toxic masculinity in "All She's Got." Handclaps and doo-wop harmonies are in contrast to the heavy subject matter as he croons, "You were told when you were young / The world is yours and so you wanted / All she's got."

The infusion of other genres throughout the album provides pleasant surprises. Punk meets rockabilly in the Bloodshot Bill-esque "Nothing but Trouble." Selections such as the doomy "Departure" and Southern-rock-tinged "Pulling Against Me" may appeal more to fans of Led Zeppelin and Clutch than those of X and the Germs.

With his usual eye for presentation — his 2017 LP Not About Nightingales came with a hand-stitched book of lyrics and poems — George packages Song of Love in a manually bound photo booklet with a digital download code.

In the week of February 2, the closest rock music came to cracking the top 20 spots on the Billboard Hot 100 was with pop-rock acts Panic! At the Disco, Maroon 5 and 5 Seconds of Summer. That is to say, guitar rock isn't exactly hot right now. Does George care? It doesn't seem so. And that is very punk indeed.

Song of Love will be available at ericgeorge.bandcamp.com on Friday, February 15. Catch George that night at a joint album release show with Addie Herbert, Meg Rice and the Fobs at the Hive on Pine in Burlington.