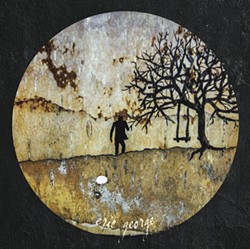 Eric George has a timeless quality. Perhaps that's why it took him so long to release his self-titled debut record. George has been quietly plying his trade at coffee shops and other small venues around the state for some years. The album, out this week, is imprinted with a 2014 copyright, suggesting it's been in the works for well over a year. The guess here is that George, who naturally embodies the hard-nosed, blue-collar spirit of a bygone era, subscribes to the old craftsman's notion that anything worth doing is worth taking the time to do right. One need only listen to his new record — ideally on the actual vinyl — for proof that he's probably correct.

George is cut from the same tattered minstrel cloth as countless vagabond songwriters before him. Really, the last thing the world needs is another self-styled throwback appropriating Woody Guthrie or Hank Williams. Still, the air of shabby authenticity in George's music renders such criticisms moot.

Recorded with Burlington expat, songwriter and Jenke Records founder Tommy Alexander — a guy who knows a thing or two about shabby authenticity — the album crackles with tinny warmth. It sounds like it was recorded by singing into a can in a Mississippi Delta studio in the 1920s. This is especially true when the record is played on a turntable.

As a songwriter, George is rooted in early country and Delta blues, and he ably captures the scruffy whimsy of those genres. With a picked guitar part that mirrors his vocal melody, opener "Overgrown" has a hazy, swampy feel. "December Flowers" dishes winking lyrical charm and jumpy acoustic blues in equal measures. "Fades Away" is a stark, stirring ballad that almost sounds like one of Sam Amidon's deconstructed Appalachian folk songs. Propelled by foot-stomping percussion and a tumbling riff, "Driftin'" could pass for a long-lost Lightnin' Hopkins tune. The album's penultimate — and best — track, "Tomorrow I'm Gonna Die," tackles the weighty subject of passing on with shrugging irreverence. It winks knowingly at Guthrie.

George doesn't reinvent the wheel on his self-titled debut, but the carefree earnestness with which he plays is genuine and endearing. More importantly, it's compelling. The album has an intentionally lo-fi ambience that somewhat obscures just how good a player and singer he is. George effortlessly unfurls bluesy licks that strike a balance between precision and jaggedness. The same is true of his versatile voice, which is effective in a throaty howl and a softer, raspy croon.

George does indeed work within his own sense of time. But he does so in a way that sounds as vital now as it might have 100 years ago.

Eric George celebrates the release of his debut solo record with a show this Friday, October 2, at Studio A, North End Studios, in Burlington. The album is available at ericgeorge.bandcamp.com.