Eric Bushey, 'Been There a Long, Long Time' 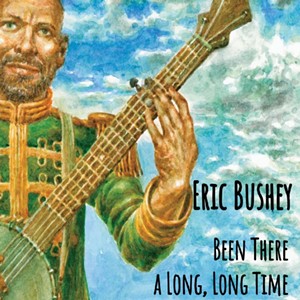 Death, God and home. It's hard to find three stronger themes in folk music, and Eric Bushey leans into each of them on his debut album, Been There a Long, Long Time. The 11 tracks of fiddle- and banjo-heavy bluegrass and country stompers find Bushey contemplating the meaning of loss and acceptance ("Who Will Part the Waters Now?"), a family legacy of bootlegging ("Four Stalks In"), and making deals with the devil ("Robbie at the Crossroads"). It's a true American gothic record, full of tradition and weighty themes.

Though Been There a Long, Long Time is Bushey's first record, he is far from unknown in Vermont's music scene. The guitarist, banjo player and vocalist is a member of the Blue Rock Boys, the Stragglers, and Fiddlehead Hollow, all bands specializing in folk and roots music. When he's not gigging around the area, Bushey is also the director of instrumental music at Bellows Free Academy in St. Albans.

His expertise is evident in spades throughout the record. First and foremost, Bushey is a skilled composer. The melancholy arrangement on "Walnut Hollow" allows for the banjo and fiddle to sway in minor-key movements, giving the instrumental track a sense of tonal darkness. Shout-out to Bushey's Fiddlehead Hollow compatriot Alex "Rusty" Charpentier for the tastefully evocative violin parts.

Many of Bushey's fellow folk-scene musicians play on his debut. The Blue Rock Boys' Cliff Crosby provides vocals and acoustic guitar, and Stragglers bassist Justin Bedell handles the low end. A host of guest vocalists join in to create harmonies that Bushey layers across his songs.

"Suave Brevard (For Roger Brevard)" shows Bushey's playful, jazz-leaning side. The album's sequencing is handled well, balancing Bushey's various influences. He even makes a rock excursion and trades the banjo for a Fender Telecaster on "Four Stalks In." When he presents a more traditional number, such as "Browns River Rambler," the contrast reveals a carefully curated album rather than a collection of down-home yarns.

On his home page, Bushey writes that the death of his mother in 2018 heavily influenced his songwriting on Been There a Long, Long Time. The reflective, even accepting nature of the lyrics on the title track reveals a man grappling with the inevitability of death. "When the wind blows hard and wins the fight / when that old tree does come down / when they cut her up to warm their stoves / I hope I'm dead and gone," he sings. It's a lyric that could sound overly dark, but the notion of not wanting to outlive the trees on his property, of moving on in the natural order of things, fits the spirit of the record. This is an unrelentingly mature album.

Been There a Long, Long Time is available at ericbushey.com and on Spotify.

Speaking of Eric Bushey, Been There A Long Long Time

Album Review Eric Bushey Been There a Long Long Time