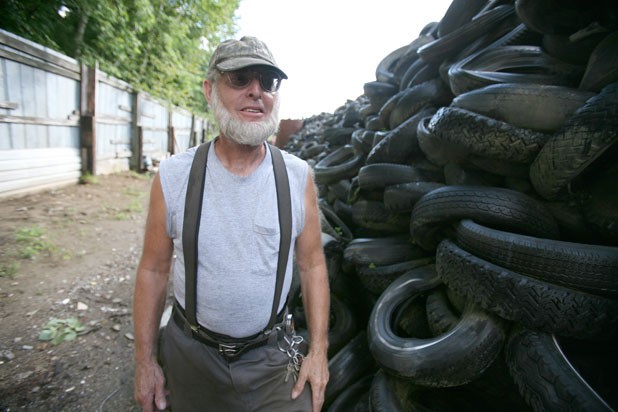 A division of the U.S. Environmental Protection Agency plans to send inspectors to a Milton junkyard to investigate whether a federally funded cleanup is warranted there.

Gary Lipson, a coordinator with EPA's Region 1 Emergency Response and Planning branch in Boston - sometimes referred to as the "Removal Program" - said the Vermont Agency of Natural Resources contacted his office a "few weeks ago" for help with ABC Metals/Rhoades Salvage, which has been operating without a license for more than eight years.

Of particular concern to the EPA, Lipson said, are recent environmental tests showing that sediment in the pond adjacent to the junkyard contains PCBs and elevated levels of heavy metals, including arsenic, barium, cadmium, chromium and lead.

"What I have not seen yet is soil or near-surface soil [testing] that would constitute a contact threat" to human health, Lipson added. "That's something we'd be interested in sampling within the gates of [the] property and the surrounding properties."

Gil Rhoades, who has owned and operated ABC Metals since 1970, couldn't be reached for comment. As Seven Days reported in an August 13 cover story, entitled "Junkyard Dog," the site has irked town and state officials for more than a decade.

In 1995, the Vermont Agency of Transportation, which licenses and regulates auto salvage yards, obtained a court order requiring Rhoades to stop accepting scrap tires (except for those that arrive on junked vehicles) and to begin shredding existing ones, which he never did. Milton's fire chief has warned that if the tire pile - estimated to number between 100,000 and 1.15 million - ever caught fire, his department wouldn't have the personnel or resources to extinguish the blaze. Rhoades also ignored an October 2007 order by the Vermont Attorney General's Office to begin removing tires from the site.

More recently, groundwater tests, including those conducted in nearby residential wells, have revealed the presence of heavy metals at levels several times higher than the federal government considers safe.

Lipson said he expects the EPA will visit Rhoades' operation and the surrounding land "within the next month." Among the scrap-yard images on file that "caught my eye," he added, was one that showed a partially submerged oil drum in a pond on the site.

Town and state officials have long struggled to find ways to coax or cajole Rhoades into compliance, with limited success. Most recently, the Milton select board denied ABC Metals a certificate of approved location, the first prerequisite for obtaining a junkyard license. The board cited Rhoades' "inadequate and insufficient" plan for removing the tire pile, as well as his "lack of past performance," noting it " puts his credibility into question." Rhoades' appeal of the board's decision is pending in Chittenden Superior Court.

The problem, government officials readily admit, is that no one is willing to shut the junkyard down, out of fear they'll assume ownership of the property, along with millions of dollars in potential cleanup costs. ANR and the attorney general's office have said they'd prefer instead to "force compliance" and keep the junkyard operating so there's a revenue stream to help defray any cleanup costs.

But critics of that approach, including members of the neighborhood group, Milton CLEAN - or Citizens Looking for Environmental Action Now - point out that the 66-year-old Rhoades has stated publicly that he never intends to clean up his land. Moreover, they say, remediation costs will only continue to increase the longer he's allowed to remain open, accepting hazardous waste.

During Seven Days' visit to ABC Metals last month, Rhoades admitted that he doesn't have the money or the inclination to remove the existing tire pile, nor does he plan to remediate any contamination on his 5.3-acre lot.

State and local officials may welcome EPA's involvement in this case, but it probably won't be the silver bullet everyone is hoping for.

Finally, the program only deals with emergency responses or "time-critical actions." Those come with statutory limitations: Any cleanup would have to be completed within a year and cost no more than $2 million. Both conditions would limit the scope of the work. And barring some major, as-yet undiscovered contamination, it's unlikely that ABC Metals property would qualify for more extensive cleanup under the federal Superfund program, according to David Mears, director of the Environmental and Natural Resources Law Clinic at the Vermont Law School.

"It doesn't surprise me that a junkyard, even one that has so completely fouled up the environment, wouldn't have been high on EPA's radar screen," Mears said. "Believe it or not, throughout New England there are much worse sites."