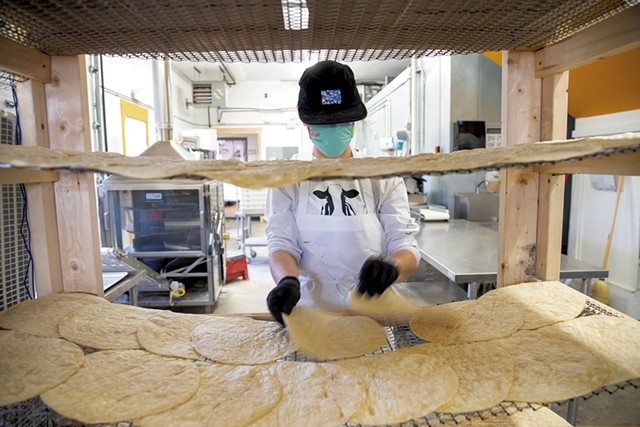 By noon on a recent Wednesday, the All Souls Tortilleria flour tortilla operation on Oak Street in Burlington was in full swing. Fresh balls of dough were flattened in a wedge press before heading into a carousel oven, from which they emerged puffy with air bubbles. A bite of a tortilla hot off the line evoked the toasty aroma of a late-summer wheat field and had a pastry-like flakiness.

Between these Sonoran-style tortillas made with lard and the company's Four Corners version made with sunflower oil, All Souls produces about 5,000 flour tortillas a week. Since January, these have gradually joined the company's corn tortillas in retail coolers.

Twelve employees split their week between two facilities, making up to 25,000 corn tortillas, plus chips, hominy and masa, in a wheat-free production space on North Union Street.

The business partners started All Souls in 2016. (A third cofounder has since moved on.) Fuller, 38, initially juggled the startup with his job at the Northeast Organic Farming Association of Vermont. Bossen, 34, added it on top of his now-12-year-old enterprise, Vermont Bean Crafters, which produces a line of bean-based foods that is distributed throughout the Northeast.

In an outbuilding at the 20.2-acre Kingsbury Market Garden in Warren, the Bean Crafters team of six makes more than 5,000 bean burgers in a typical week. On April 9, Bossen expects to complete the purchase of the conserved farm, which includes a big old barn, farmhouse, Bean Crafters' production space and six croppable acres.

Both the tortilla and bean businesses are on solid footing, he said, even though Bean Crafters' sales to colleges and restaurants took a serious hit in 2020. But the pandemic pause was valuable. "One of the things that COVID clarified for me [was] how I wasn't getting all of my life goals and needs met by kitchen work," Bossen said.

The soon-to-be-renamed Cloud Water Farm will provide a place to trial bean varieties and cultivation methods. Bossen plans to plant apple trees and hazelnuts and will continue to partner with the Abenaki Land Link project to grow and process traditional crops for Abenaki citizens. 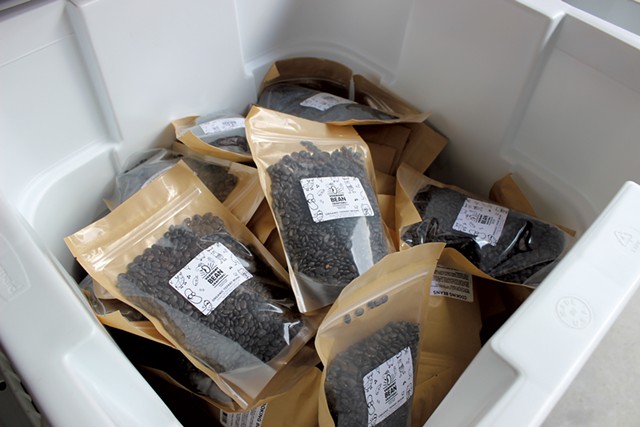 After a decade of paying himself little to nothing, Bossen said he finally turned a corner about two years ago. "Between Bean Crafters and All Souls, I'm able to make the living that I need to," he said. The bonus: "I don't need everything that we do or grow to be for sale or turn a profit. There's more to life than dollars."

The road Bossen has traveled since he first started Bean Crafters in 2009 in a cramped kitchen on a West Rutland farm has run into many detours and dead ends. There was even a literal car accident during a period when he was cooking through the night and fell asleep on his drive home. Though he was not seriously hurt, the car was totaled. When the crash jolted him awake, Bossen recalled, all he could think about was the precious $400 he'd just spent on winter tires.

"That could have been where Bean Crafters stopped," he reflected. A generous mechanic gifted him a van that kept his business rolling.

When asked why he persevered, Bossen cited "the optimism disease" from Salman Rushdie's 1981 novel, Midnight's Children. "I think it can get people through really hard times but also keep them mired in hard times," he observed.

Bossen's father, a carpenter with a small woodworking company, provided an example, too. "I remember growing up and watching him be the last person to cash his paychecks," he said.

Bossen almost skipped college: He had a hard time justifying the expense — especially since he had no idea what he wanted to do. But the New Jersey native had fond memories of snowy visits to Vermont with loads of cousins, so he applied to Green Mountain College in Poultney and landed a substantial scholarship.

During his sophomore year, Bossen started a biofuel cooperative. "I would take a grocery cart from Shaw's and go to the different restaurants in town, pick up their used frying oil [and] bring it back to an empty dorm to filter through old jeans," he explained.

The venture taught him "how not to run a business," Bossen said dryly. A professor had helped seed the project with some grant funding, which led to another epiphany: Bossen determined to build something that people valued enough to spend their money on.

He also worked on the college's draft-powered farm. Even as he recognized that it was a "completely financially unsustainable, overly idealistic farm," Bossen found "every aspect of it just life-affirming." 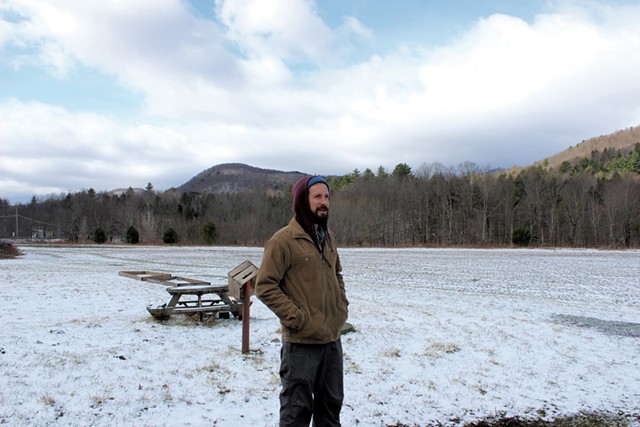 Bossen has eaten mostly plant-based since he was 16. He began making his own veggie burgers from scratch because he saw room for improvement. "There's just no joy in that salted cardboard," Bossen said with a laugh.

Then he started thinking about it as a business opportunity and a way to support local farms. "Every grocery store, every restaurant had these really lousy burgers that weren't doing anything to participate in the local food economy," he said.

"You know that Annie Dillard line, 'How you spend your days is, of course, how you spend your life'?" he paraphrased. "Cooking with people for our community seemed like the most life-affirming thing I could do."

Greg Cox, who owns Boardman Hill Farm where Bossen first made his burgers, has mentored generations of mission-driven students. "Joe was just so filled with ideas and energy. He wanted to change the world," Cox recalled. Bossen stood out for his work ethic. And, the farmer said, "He wanted to make sure everyone else did well around him."

It took Bossen time to learn that he needed to look out for himself, too.

In 2011, he moved Bean Crafters into the Mad River Food Hub in Waitsfield, where it stayed until its 2015 move to Warren. The business grew and diversified to include catering, new products, even a short-lived foray into a University of Vermont campus café. "We went from one and a half employees to 16," Bossen said. "It was exhausting but kind of exhilarating and affirming."

Mad River Food Hub founder Robin Morris has worked with many visionary entrepreneurs. He never doubted that Bossen would be successful — eventually. "His food is very authentic, and that carries him a long way," Morris said. "He just had to find a way of doing business around that authenticity."

One challenge: "Joe's lack of self-interest was sometimes detrimental to his business," Morris said.

Five years in, despite steadily increasing sales, Bossen acknowledged, "I was not able to pay myself a dime." To make ends meet, he worked weekends tending bar, and his frustration grew.

"I was trying to do all this stuff that I found really meaningful," he said, "but the best way that I could get paid was [serving] a drug, basically."

Finally, it dawned on Bossen that he had amassed enough experience and contacts to land a job doing meaningful work for someone else. The realization that he had options was empowering. "It took me a long goddamn time," he admitted, but "I committed to valuing myself and my time."

Launching a second business was not the obvious next step, but All Souls checked several boxes for Bossen. He had become excited about rotating legume production with cereal crops, such as corn, for improved soil health and reduced disease and pest pressures. As with bean burgers, there was a market for a better, locally made product.

During a program offered by Native Seeds/SEARCH, a nonprofit seed conservation organization based in Tucson, Ariz., Bossen first tasted tortillas made from hand-ground, open-pollinated corn. "I wanted other people to know what they had been missing, too," he said. 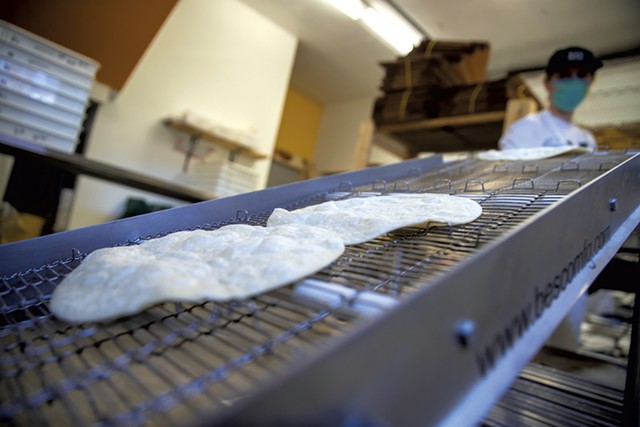 Over his years selling to City Market, Onion River Co-op, Bossen had gotten to know Lynn Ellen Schimoler, who held various roles there and currently works for the Vermont Agency of Agriculture, Food and Markets. The two had regular conversations about agriculture and food systems. "He's always in that space of deep thinking and care for the land and care for other people," Schimoler said.

She believed there was demand for locally made corn tortillas and chips. Through the co-op's Local Farm and Producer Investment Program, All Souls landed a no-interest, four-year loan of some $50,000.

Diversification was also a pragmatic move for Bossen. He figured two businesses would hedge his bets and potentially generate one decent salary. And, he added, "I have that personality that wants a lot of things going."

2020 could have dealt a mortal blow to Bean Crafters, which was about to scale up significantly to meet the demand generated by its first dedicated salesperson. "[College of the] Holy Cross in Massachusetts had literally just placed their first purchase order the week before they vacated campus," Bossen said.

A Bean Crafters production facility fire in January 2020 delayed the expansion and probably saved the company. "We really could stop and take stock," Bossen said. He and his team "realized if we want to be profitable, we actually need to just grow slower."

While sales into the education market remain in flux, Bean Crafters has focused on a retail packaging redesign stating its racial justice commitment and touting that 86 percent of the burger ingredients are sourced within 350 miles.

In Warren on a late March morning, Bossen gestured to the far edge of a snowy field. By the time he reaches his sixties, he mused, hazelnuts will form 10- to 12-foot hedges, and "that whole western border will be an apple blossom promenade in the spring."

Before then, Bossen plans to build a "fermentory" in the barn, where he will tinker with cider, vinegar and miso. He'd love to make more products that are preserved with salt, yeasts and time "versus in plastic or the freezer," he said.

The world still needs changing, but Bossen recognizes that, like building a business, it won't happen quickly.

"I don't really expect it to change in my lifetime," he said. "But I'd like to at least shift toward things that do make a little bit more sense to me — even if the world's not gonna make more sense to me."

The original print version of this article was headlined "Seeds of Change | Joe Bossen's entrepreneurial journey into bean burgers, tortillas and balance"