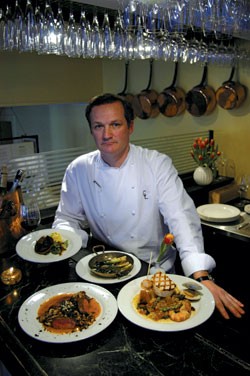 C'est triste. After 13 years as a Vermont dining destination, Christophe's on the Green in Vergennes has closed for good, and lovers of haute cuisine are in mourning. Co-owner Alice Lissarrague reports that when the restaurant shut down for its traditional winter break in January, she and her husband, Chef Christophe Lissarrague, had every intention of reopening. But after examining the numbers, she says, "We decided we just couldn't do it . . . it just didn't make financial sense."

This may seem odd timing, given all the accolades Christophe's received in 2007. Fodor's gave it "top pick" status, as did Travelocity. The Boston Globe chose it as one of the "top restaurants in New England," and Santé magazine selected it as New England's "restaurant of the year for innovative cuisine."

All that press didn't mean the dollars were rolling in. "It was just always a financial struggle for us, being in Vergennes and having a high-end restaurant. There's lots of traffic at some times of the year; at others there's very little," Alice observes. "If we'd gotten into Gourmet or a magazine like that, it probably would have ensured our survival."

Another tricky aspect was deciding whether to serve dinner during the slow season. A winter shutdown was better for the bottom line but made it impossible to keep good help. "The only reason we decided to go through the whole year was so Christophe could keep a good sous chef on," Alice says. As it stands, the pair is exploring other opportunities. "It's heartbreaking . . . This is not what we wanted to have happen," she says. Especially the week before Valentine's Day.

There's been a significant changement at French-flavored Quatre Bistro on Main Street in Burlington. Chef Frank Pace, formerly of Smokejacks and the Shelburne Supermarket, is the restaurant's new executive chef. "We're making traditional bistro dishes using local Vermont ingredients," explains Pace. "We make everything in house, including pastries." Pace is seeking a local supplier to turn out Quatre's crusty loaves. He's getting his poultry from Misty Knoll Farms, his chevre and Bonne Bouche cheeses from Vermont Butter & Cheese and butternut squash from Arcadia Brook Farm. Come summer, Pace will be adding to the Arcadia order with produce from Arethusa and Pitchfork Farms.

During lunch, the resto sticks with more conventional fare such as sandwiches, salads and soups. In the evenings, though, the French accent is more pronounced. What's on the dinner menu? French classics such as entrecôte de boeuf, coq au vin and escargots Bourguignon.

Tilley's Café, on lower Church Street in Burlington, has a new chief cook, too. Ben Roberts, a recent UVM graduate, has been working at the restaurant since it opened. Around the holidays, when the owners needed someone to step up in the kitchen, Roberts was the man for the job. The young chef whips up tastes of the tropics including coconut prawns, Hawaiian escolar and "Paniolo" steak, named after the famous Hawaiian cattle ranchers.

Roberts has been getting advice from a seasoned expert. Chef Mark Timms of the Vermont National Country Club has been working with Tilley's as a consultant; he's a mentor of sorts for Roberts.

Like Chef Timms, Roberts is interested in good works as well as in good food. Once a month, Tilley's invites youngsters from the King Street Youth Center to dine at the restaurant for free. It's a program that Timms, who grew up in foster homes, pioneered at VNCC.

Says Timms, "What I'm trying to get off the ground is to get a few area restaurants to invite 10 kids in once a month . . . I want these kids to gain confidence in a social setting." He's hoping to convince a few more downtown restaurants near King Street to serve the greater good.