Entrain, Just a Matter of Time 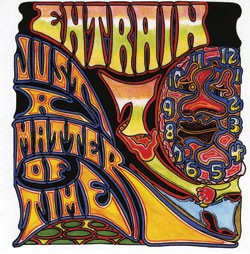 With psychedelic cover art recalling the work of 1960s graphic design icon Stanley Mouse (think almost every Grateful Dead album ever), Just a Matter of Time looks like a throwback to the heady heyday of genre-mashing wiggle-rock. And in many ways that’s just what Entrain’s latest is — the band’s name, after all, stems from a term coined by Dead drummer Mickey Hart: “entrainment.” The Martha’s Vineyard sextet bills itself as a “funky world-jam-ska-reggae-rock stew with enough drums to sink a battleship.” Typically, that’s just the sort of description that would send a jaded rock critic running to the bathroom to “vomit- wretch- puncture- their- own- eardrums- swear- off- music- forever- and- become- an- accountant.” Typically. Though deliriously upbeat and loaded with enough clichéd hippie-dippy pseudo-wisdom to sink a whole fleet, Entrain’s sixth release is, in fact, superbly played and undeniably infectious.

The band was founded in the early 1990s by drummer Tom Major, and each member has a fine musical pedigree — Major himself was a longtime touring percussionist for rock ’n’ roll icon Bo Diddley. It comes as no surprise that this collection of premier players can kick out the jams with the best of ’em. From the undulating funk of album opener “Turn It On” and the slinky blues of the following track, “Got to Get Through to You,” to the island groove of “A Long Time Ago” and the heat-seeking Cajun shuffle of “Sad Joe Zydeco,” Entrain cooks a mean musical stew and shows considerable proficiency with each ingredient.

If we’re to continue with the stew analogy — hey, they started it — then song lyrics would be but the garnish. Like parsley, they’re lightweight, mild in taste and virtually devoid of nutritional value. If Entrain’s lyrics were a side salad, it would consist primarily of iceberg lettuce.

Elvis Costello once posed the question, in a song of the same name, “What’s So Funny ’Bout Peace, Love and Understanding?” With that simple query, the Brit-born popster likely offered more insight than Entrain does with an entire album (14 tracks, 60-plus minutes). The disc’s most egregious offense, lyric-wise, is its eighth cut, “Drums For Peace.” The jammy hip-hop rant is about — you guessed it — drumming for peace. Dude. One imagines the album’s fifth track, “C Drum Blues,” covers similar territory. As it’s essentially a 3-minute drum circle with no lyrics — or anything but drums, actually — we can’t be sure. But we can feel it, bro.

Entrain ladles the funky stew this Friday at Higher Ground’s Showcase Lounge with reggae-infused Jerry Garcia acolytes Grateful Dread — are you effin’ kidding me? Eat heartily. But bring your own parsley.