It may come as a surprise to Vermonters that British author Rudyard Kipling — who wrote The Jungle Book, among many other classics — lived for four years in the Green Mountain State. The Bombay, India-born writer met and married American Carrie Balestier, from Dummerston, in London in 1892. Charmed by the southern Vermont landscape during a visit to her relatives, the 27-year-old author bought 10 acres in Dummerston from her brother Beatty and built a distinctive house in the American Shingle style that he called Naulakha. He lived there with his family from 1893 to '96.

Today, that exotically named rural Vermont property, located three miles from Brattleboro, is in tip-top shape. (The name comes from the Naulakha Pavilion at Lahore Fort in present-day Pakistan that Kipling knew from childhood; it was also the title of a novel he cowrote with Carrie's other brother, Wolcott.)

But don't plan on visiting it like a house museum; Naulakha is meant to be stayed in.

The National Historic Landmark is a vacation rental owned by the Landmark Trust USA, which uses rental income to maintain historic properties. Up to eight guests can stay for as little as three nights or as long as a month in the beautifully restored four-bedroom, three-bathroom house. (The $520-per-night cost becomes affordable when split among a group.) Another four guests can rent the carriage house next door, where Seven Days bunked down comfortably one night in April. 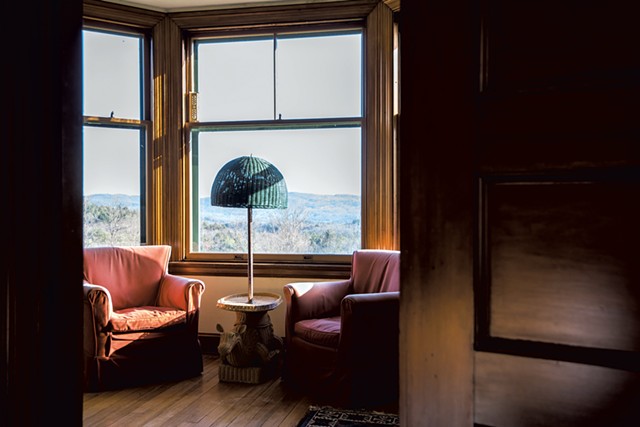 Naulakha is not your typical Airbnb experience. Passing between the fieldstone pillars that mark the property entrance feels like stepping back 125 years. Propped open on either side are the original iron fleur-de-lis gates. Lining the dirt drive are the white pine trees Kipling planted, now a towering grove. The road continues past a horse barn, an icehouse and the carriage house, converted to servants' sleeping quarters at the author's behest.

"It felt like Kipling had just walked out the door. It's a unique experience." Emily Wadhams tweet this

At the top of the drive is the house he designed with New York City architect Henry Rutgers Marshall. The green-shingled juggernaut — 90 feet long and 22 feet wide — appears, as Kipling intended, like a streamlined ship riding the side of a hill. Its wide windows look east across the Connecticut River Valley to Mount Monadnock, 30 miles away. The house is still furnished with much of the Kiplings' furniture and artwork. 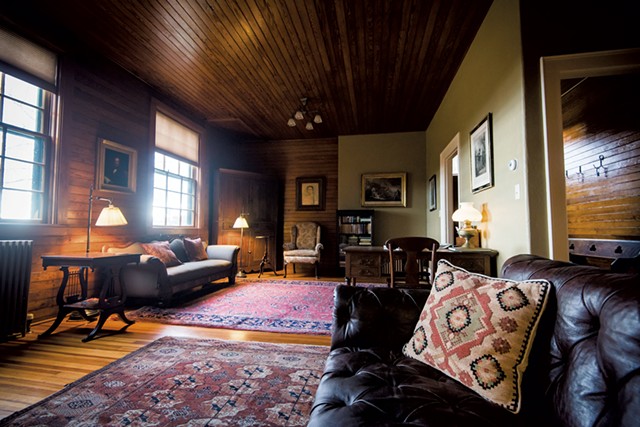 As Landmark Trust's executive director, Susan McMahon, explained, "You get to stay in a short-term rental, but what's different here is, we're stewarding these historic properties, not modernizing them within an inch of their life. It's about enhancing appreciation for local history."

Naulakha's ship-like efficiency and the purpose of its layout — to provide privacy for the working author — are immediately apparent. Kipling oriented the drive so that visitors arrive at a porte cochere on the viewless western length of the house, which has few windows.

Indoors, that western side is lined with two sets of beautiful wood stairs, one of which was for the servants. First-floor rooms open one onto the next, beginning with the kitchen at the north end, which still contains the original hulking range hood and pine cabinetry. (The trust installed the fridge.)

Guests must bring their own food to Landmark Trust properties — or, like this vacationing reporter, splurge at Peter Havens and Whetstone Station in Brattleboro. At Naulakha, they can eat at the 125-year-old dining table and stash dishes on the teak sideboard carved by Lockwood de Forest, a family friend and early business partner of Louis Comfort Tiffany, of Tiffany & Co. After-dinner drinks can be enjoyed in the loggia, Kipling's favorite room, where a huge window opens to the views. 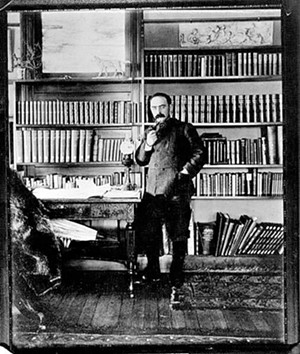 The famous writer's study is the last room at the south end. Visitors had to pass through Carrie's office to reach it. The westerly windows are still covered with the opaque yellow Tiffany glass panels that screened his desk from prying eyes.

Kipling wrote prolifically in that room, completing his two Jungle Books, Captains Courageous, The Day's Work and The Seven Seas while he lived at Naulakha. He also began his novel Kim and the Just So Stories there. He seems not to have heeded the scriptural quote his father, John Lockwood Kipling, carved in relief over the study's fireplace: "The night cometh when no man can work."

The study's desk is a period piece; the original has been moved to the roomy attic, along with the author's golf clubs. The latter was a gift from Arthur Conan Doyle, who introduced his fellow writer to the Scottish pastime when he visited in 1894.

Those clubs are behind glass, but in the attic game room next door, guests can use the pool table where Doyle and Kipling played, built to resemble one Kipling admired at Mark Twain's Elmira, N.Y., house. Outside, guests can play tennis on Kipling's clay court, reputed to be the first in Vermont. Rackets are provided.

Renters can even soak in Kipling's beloved tub, ringed with a smooth band of wood for resting the arms. One modern-day guest ran the bath but forgot to turn it off while upstairs in the game room; his insurance covered the damage. Landmark Trust's booking conditions state that renters are responsible for any such mishaps, but McMahon noted that there have been "relatively few."

If a stay is not in the cards, visitors can sign up to tour the property and buildings on June 6 and 7, when Landmark Trust opens the estate to the public for its annual rhododendron tours. The bushes have matured to a massive landscape feature that forms a tunnel along one of the garden paths.

Emily Wadhams, who joined Landmark Trust's board as vice president two years ago, first experienced Naulakha on a retreat with the Preservation Trust of Vermont board, to which she also belongs.

"It felt like Kipling had just walked out the door," Wadhams recalled of her visit, adding, "It's a unique experience, in my opinion, from your regular short-term rental. People go there because they want something that's a little different."

Naulakha was the first property acquired by Landmark Trust USA, in 1992. At the time, the organization was part of Landmark Trust UK, which has restored more than 200 historic properties as vacation rentals in the UK and Europe since it was founded in 1965. The two trusts co-rehabilitated Naulakha based on the architect's plans and historic photos, many of which were found in the house.

It helped that the Cabot-Holbrook family, who bought the property from the Kiplings, left most of the former owners' belongings intact and moved to the carriage house in 1942, leaving Naulakha largely untouched for the next 50 years. 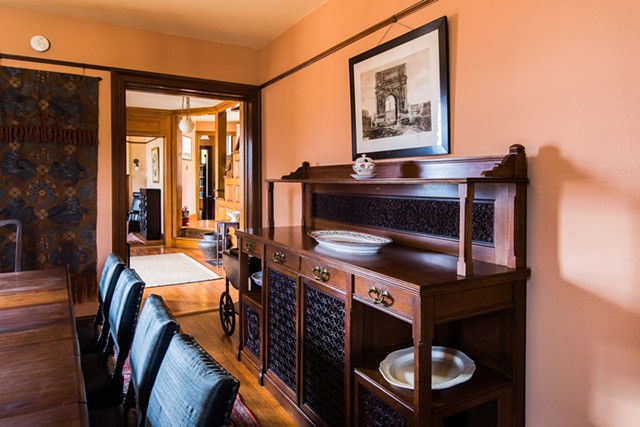 Landmark Trust USA went on to restore the carriage house and acquire three more properties in the area: the 1915 Sugarhouse at Scott Farm (the farm, half a mile from Naulakha, serves as the nonprofit's headquarters); the 1837 Dutton Farmhouse, which overlooks Scott Farm; and the 1802 Amos Brown House in Whitingham.

By then financially viable, the U.S. branch became an independent nonprofit in 1999. Landmark Trust USA has plans to expand into other states, with potential projects in Rhode Island, Maine and New Hampshire, McMahon said. 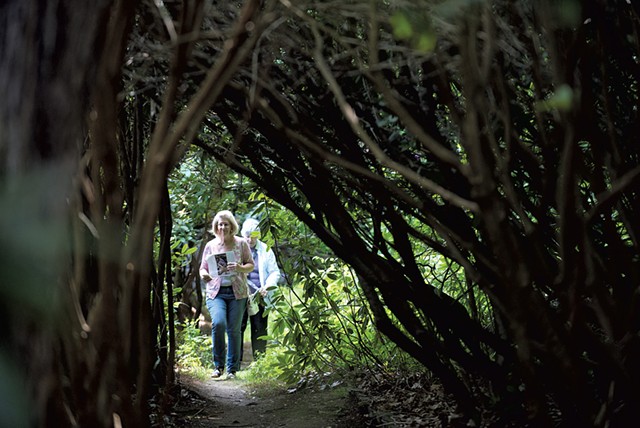 Architectural historian Glenn Andres of Middlebury admires this model of preservation. He has stayed in a Landmark Trust UK property — a 1613 Jacobean banqueting pavilion in the Cotswolds.

"I think it's a neat idea," Andres said of both trusts' approach. "Rather than having lots of people go through [as they would in house museums], it's easier on the properties to run them as short-term rentals."

State architectural historian Devin Colman agrees: "It keeps the buildings and properties in active use, which is important not just for ... generating income for maintenance, but for the people using the buildings. They get to experience the spaces as they were intended to be used."

Kipling left Naulakha, where he had hoped to stay, after a dispute with Beatty Balestier and a subsequent lawsuit, which brought more publicity than he could endure. In 1907 Kipling became the first English-language writer to win the Nobel Prize for Literature. He would live in several houses in the UK and India until his death in 1936, but none that he designed. Vermont has the best of him.

Book Naulakha Estate and Rhododendron Tours, or a stay at Naulakha or the Kipling Carriage House, at landmarktrustusa.org.