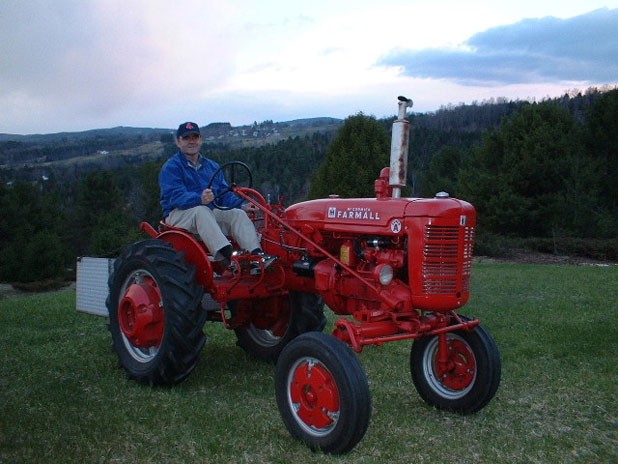 A perfect storm of high fuel prices, deteriorating roads and a growing public dialogue about climate change is making Vermont's rail infrastructure more important than ever. At the same time, transportation revenues, which derive largely from the gas and sales and use taxes, are decreasing. Into this complicated set of circumstances comes Robert Ide, who has been appointed manager of the Rail Program by Neale Lunderville, the Secretary of Transportation. As the person charged with implementing the state's rail plan - in other words, the guy who gets stuff done - he will play a critical role in Vermont's rail future.

Ide, 57, is currently the director of energy efficiency for the Department of Public Service, a post he's held for five years. Before that, he spent 10 years in the Senate and eight years on the Senate Transportation Committee, "where," he says, "I think I was viewed as the rail specialist." That was most likely due to the hands-on experience he acquired while helping to run his family's agricultural feed-and-grain business in St. Johnsbury, a heavily rail-dependent operation.

Ide's new boss will be David Dill, who is Deputy Secretary of Transportation, and will become Secretary in August when Lunderville replaces Michael Smith, who's retiring from his position as secretary of administration for Gov. Douglas.

Aside from managing the Rail Program, Dill expects Ide to be the spokesman for the state's position on rail issues and to communicate with the public, the legislature and rail advocacy groups on policy and budgetary matters. "He needs to be able to articulate the vision, if you will," Dill says.

That vision is coming under increasing scrutiny, because VTrans has yet to use the funds that former Sen. Jim Jeffords procured four years ago for improvements to the western corridor, especially the track between Burlington and Rutland. Rick Moulton, a member of the Governor's Rail Council, says he's hopeful about Ide's appointment to rail manager, but was not impressed with the Rail Program's past performance. "The same criticisms of the state exist," he asserts. "Another year has gone by, and they still haven't spent any of the $30 million allocation that we got from Jeffords. Still no leadership and no vision." Moulton adds that the costs of steel and other infrastructure components have risen steeply in the past year, while the earmarked funds remain the same.

Dill is aware of that criticism, but urges patience. "We want to be very careful with that money, because we want to make sure we have the right prioritization system in place," he says.

Ide expects to put his legislative experience and contacts to good use, as he mediates the criticisms from rail advocates and the budgetary limitations imposed on the Agency of Transportation. "One of the advantages that I bring to the job," he says, "is that I'm familiar with a number of the players right now. I think I bring credibility to the job that's going to be very helpful."

Ide also brings a technical understanding of Vermont's energy landscape, where he says transportation and space heating represent the best chance for efficiency improvements. "I look at the opportunity to be involved in rail and transportation as an opportunity to have an impact in the carbon-footprint conversation," he says.

A major portion of that conversation is the rate at which truck freight can be transferred to rail. Moving freight over the railroads uses about eight times less energy than moving it over the highway. With diesel prices approaching $5 per gallon, competition from rail shippers will soon make trucks prohibitively expensive.

But before Vermont can take advantage of rail's relative efficiency, it must spend money to increase the weight limits on the state's tracks and bridges. Despite the urgency of escalating fuel prices, Dill says those infrastructure upgrades are intermediate and long-term challenges for the Rail Program. Ide, however, asserts that track upgrades need to be a priority for the state's economy: "I want to make the shippers and receivers in Vermont as competitive as they can be, and the component that I can add value to is the movement of freight."

On the passenger side of the conversation, Ide's five-year vision for Vermont rail travel includes "an improved rail corridor on the western side of the state that allows passenger service into downtown Burlington." He also wants to re-evaluate the botched purchase of the Diesel Multiple Units, the smaller and more efficient self-propelled passenger cars. The legislature appropriated $17.5 million for the cars last year, but the manufacturer, Colorado Railcar, wouldn't agree to the zero-risk financial guarantee required in the legislative language. "I think we essentially backed away from that commitment for, in my mind, the less-than-perfect reason," Ide says. "If that equipment is going to provide us with the same or better service for lesser cost, we've got to look hard at it."

Indeed, Dill adds that restructuring passenger service will be Ide's most pressing challenge, given Amtrak's increasing costs and the depressed economic forecast for Fiscal Year 2009, which cut the transportation budget by $4 million between January and April this year.

Considering that grim reality, it's a good time for a new, enthusiastic person to manage the Rail Program. Moulton says Ide is "not a bureaucrat, so maybe he'll actually do something."