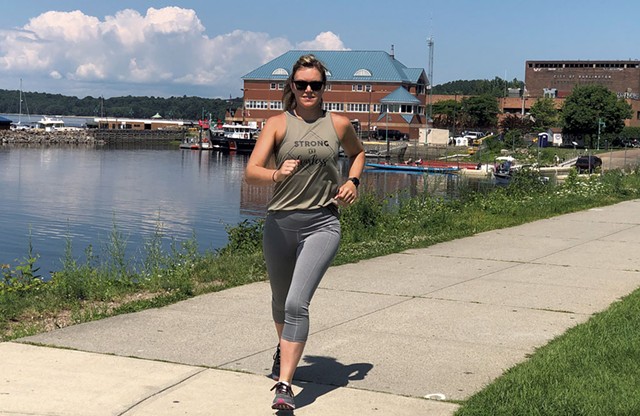 Katie Spotz ran across Vermont earlier this month so she could help people across the Atlantic Ocean.

A long-distance runner and endurance athlete, Spotz has spent more than a decade pushing her body to the limit to fundraise for charities that spearhead clean-water efforts in impoverished areas around the world. She earned international attention in 2010 when she became the youngest person, at age 22, to row solo across the Atlantic Ocean, taking 70 days to journey from Senegal to Guyana. She has finished five Ironman Triathlons, ridden her bike around the country and, in a month, swum the entire 325-mile length of the Allegheny River.

The latest goal for 33-year-old Spotz is a fundraiser called Run4Water, in which she'll become the first person to run 130 miles nonstop across Maine, from the Canadian border to Freeport. She's currently serving in the U.S. Coast Guard, posted in South Portland. To prepare for the September 5 start, she warmed up in New Hampshire and Vermont, becoming the first woman to run nonstop across each state.

On August 7, Spotz took off around 5 a.m. from a bridge straddling the New Hampshire border near Bradford, Vt., and ran nearly 74 miles west, ending on the Burlington waterfront about 13 hours later. Her aunt followed in a car, and they met up every five miles so Spotz could refuel with water and sports drinks.

"Ending in Burlington was just so beautiful," Spotz said. "It wasn't a race, but it did have that feeling of crossing a finish line, just having all the people around — even though no one really knew where I came from that morning."

Spotz is raising money for Lifewater International, a Christian organization that works mostly in Africa to provide clean water. Thus far, she has raised about $14,000 toward a $20,000 goal for a project in Tanzania.

"Right now, one in three people don't have clean water, and I believe that we can change that," Spotz said. "I've been humbled to see that these adventures aren't just about getting from point A to point B. They're about getting water to people and in places that deserve and need it."

The original print version of this article was headlined "Water Warrior"