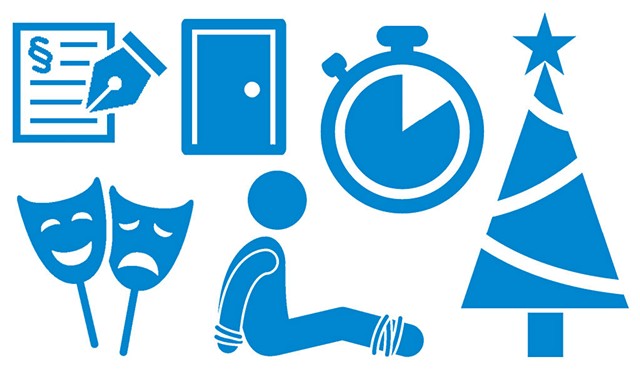 The Vermont Statehouse seemed like a bastion of transparency and openness in January.

Relaxed legislators chatted amiably with lobbyists, reporters and constituents. Committee room doors were wide open or, when closed, the business going on inside was clearly posted on the wall outside. Public input and participation in legislative drafting was encouraged, and regular folks, if so inclined, could generally track bills of interest.

Even a reporter new to Vermont, such as yours truly, could figure out pretty quickly how the process worked and manage to write a reasonably coherent story or two about the goings-on under the golden dome.

Fast-forward to the last few weeks of the legislative session, however, and it's another world.

Most committees have finished their work. A few tense legislative leaders are scrambling to modify key bills so they can pass gubernatorial muster. And, more often than not, the closed committee rooms feature no agenda outside — only a hanger on the knob that reads "Meeting in Progress."

"This time of year, there's no way that a member of the public can figure out what's even going on if you're not here in the building all the time," said Karen Horn, a lobbyist for the Vermont League of Cities & Towns.

Even veterans like Horn find the end-of-session machinations mysterious.

Nevertheless, Horn and others who have watched the Statehouse over many years say understanding last-minute legislative maneuvering often comes down to recognizing a handful of largely unseen dynamics at work.

Here are a few of them.

When the legislature convened in January, it seemed that all 150 members of the House and 30 members of the Senate had an equal say in the passage of bills. Boy, has that changed.

"Toward the end of the session, there's probably 30 members who have to pull all the loose ends together before the [legislature] can adjourn," said Vince Illuzzi, a former Republican senator who now lobbies for the Vermont State Employees' Association.

Leaders of the House and Senate appropriations, tax-writing and institutions committees play central roles as they try to figure out how to fulfill the wish lists of their fellow legislators, Illuzzi said.

In a session's early days, according to Lt. Gov. David Zuckerman, members of the General Assembly determine what they want to do, and the community reacts. Now, legislators are trying to figure out "what the final 'how' is going to be."

"Those are conversations happening with smaller groups of people," Zuckerman added.

To reconcile versions of the same bill passed by the House and the Senate, the two chambers often appoint three members each to a "conference committee" whose job it is to forge compromise and iron out last-minute details.

The ad hoc committees are supposed to stick to the language in either version of the bill in question, but that doesn't always happen. Conferees sometimes add new provisions that haven't been debated more broadly. And once four members of a conference committee sign off on a compromise, the full House and Senate can only vote yea or nay — and can't tinker with it further.

That can result in "bastard, mutant, hybrid policies" that aren't based in reality but that "several powerful people thought sounded good," said Rep. Cynthia Browning (D-Arlington), a frequent thorn in the side of Democratic leaders.

One lobbyist described conference committees as kabuki theater, more for show than substance, with the real decisions being made by the party leaders behind the scenes.

"Everybody around here likes to talk about transparency, but this time of year it's in short supply," the lobbyist said.

As the end of the session approaches, the number of closed-door meetings between legislative leaders, committee chairs and the governor's staff increases sharply.

Senate President Pro Tempore Tim Ashe (D/P-Chittenden) and Speaker of the House Mitzi Johnson (D-South Hero) meet — inside the Statehouse and out — with one another, colleagues and committee chairs to strategize their end game.

There are also plenty of impromptu meetings between key legislators and members of Gov. Phil Scott's administration, giving some the inside track and leaving others wondering.

"It's all about personal relationships at the end of the session," Horn said.

That can leave first-year legislators with a distinct disadvantage when it comes to understanding what's up this time of year.

Rep. Patrick Seymour (R-Sutton) said that as a Republican and a newbie, he doesn't expect to be fully briefed on the majority party's strategy. But he doesn't think its members should be holding off-site strategy meetings, either.

Many explain away the closed-door meetings as a necessary fact of life as the pace of decisions quickens, deadlines loom and leaders need space to speak freely without every word being publicly scrutinized.

"When this door is closed, people will jump to complain about decisions being made without them," Johnson said. Most of the time, however, such conversations are either to address logistical realities, such as when the House should convene and for which bills, or to smooth ruffled feathers.

"Sometimes it's like couples counseling for committee chairs," Johnson said. "I kid you not."

But sometimes those meetings have included a quorum of a committee or even the majority of the House or Senate, calling into question whether those in attendance are doing public work in private.

Senate Secretary John Bloomer likened the process to a family sitting around the dinner table, the parents taking input from children — to a point.

"Then mom and dad have to make a decision, and they may chat in front of you and they may not," Bloomer said.

Zuckerman said he knows members of the media and advocates for bills decry such meetings as lacking transparency, but he feels it's often "just too messy" for 50 or more people to be expected to reach consensus under deadline pressure.

"I don't think it's sort of the nefarious, cigar-smoking backroom-deal stuff that's the politics of the past and movies," he said. "I think it's relevant minds coming together to draw a conclusion that three different and sometimes disparate entities can all come together on."

Legislation that seems to have broad support sometimes stalls for reasons that aren't immediately apparent. A closer look, however, can reveal the true reason.

"There's a lot of hostage-taking at this stage," said Steve Howard, a former Rutland House member who serves as executive director of the VSEA. "It's happening right now, and it's happened every legislative session going back 30 years, at least."

Legislators in positions of power commonly hold back some bills so that they can exchange them for progress on others.

This gamesmanship often increases as adjournment nears and major bills, such as the budget, are about to pass, Zuckerman said.

"A lot of times the budget may be ready or close to ready, and there may be one or two bills that leadership or the governor would like to see happen, and the budget bill will not quite get [approved] by the conferees until those other bills are ready," he said.

There's nothing underhanded about it, he said. It's just a fact of life when the process has moved into a phase in which decisions need to be made.

Chairs of conference committees are often in a position to conduct such horse-trading, said Amy Shollenberger, a lobbyist and owner of the firm Action Circles.

Chairs, who are always appointed from the opposite chamber of the one from which the bill originated, control when and how often the committee meets — or whether it meets.

"There is never an obligation for anyone to take the next step in anything in Vermont," Shollenberger said.

Only a few bills need to pass the legislature every year to keep the state running. Most consider the "must-pass" bills to include the state budget, the tax bill, the transportation bill and the capital bill. The budget is nearly always the last to pass. For this reason, it can often be the bill of last resort.

"The budget is like the last Christmas tree to hang your ornament on," Shollenberger said.

Often, smaller bills or pieces of bills that failed to overcome other hurdles — such as a conference committee breakdown — can get dusted off and hung on the budget.

That happened recently with H.531, which would increase childcare subsidies and similar spending by $10.5 million.

After the House passed the bill, the Senate stripped it of its bill number and incorporated it into the larger budget bill, said Sarah Kenney, a lobbyist for Let's Grow Kids, which advocates for better childcare in the state. Now, the bill lives on as Section E318 of the budget.

An item important to one body can get tacked on to another bill that the other chamber supports in an effort to ensure passage.

The Senate recently added weatherization subsidies language, which missed the legislature's midterm crossover deadline, to a House bill on bottle returns. Meanwhile, the House added language that would allow police to stop motorists for not wearing a seat belt — a provision the Senate does not support — to the seemingly unrelated cannabis retail bill, which the Senate does support.

"The primary seat belt law is getting tacked on to every bill left, right and center by the House," Zuckerman observed.

Running out the clock

The session had been expected to end on May 18, but there are already predictions that it might be extended.

Legislators don't want to push off adjournment, because they have lives to get back to, and it costs about $250,000 per week to keep the Statehouse gears turning.

To get that work done by May 18, parliamentary rules governing how quickly bills can move through the process can be suspended. That takes a three-quarters vote of either chamber, a percentage Democrats and Progressives in the Senate can usually muster but those in the House, which has 43 Republicans, might struggle to pull off.

"It's the only thing that we have the power to tell them no on," Seymour said.

That can put Republican legislators in the unfamiliar position of being in the driver's seat.

Lobbyist David Mickenberg recalled an instance several years ago when a workers' compensation bill he was pushing died, not because it was voted down but because Republicans declined to suspend the rules and the clock ran out. "When a change in the rules is needed, the minority party becomes powerful in a way they weren't during the rest of the session," he said.