Employee-Owned Switchback Looks to the Future 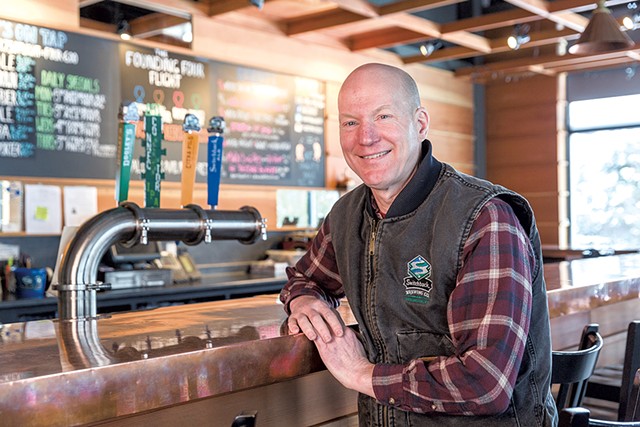 On a call with Seven Days in late November 2015, Switchback Brewing cofounder and president Bill Cherry reflected on the success of his flagship amber ale. He had formulated the beer and supervised its production since its 2002 debut, tweaking the recipe along the way. Even so, Cherry refused to take full credit for it. "That's not my beer," he said. "That's a beer we've all created together."

Cherry went on to describe the company's collaborative management style, through which, he said, he hoped to "create an environment of ingenuity." Doing so, he argued, would foster a fun and positive workplace and result in the best possible beer.

Then, in a somewhat cryptic aside, he added, "I'm going to disappear sometime." But he hoped to develop an exit plan that would keep the company's homespun spirit alive.

That is exactly what he has done. At an all-staff meeting on February 6, Cherry and brewery cofounder and business partner Jeff Neiblum announced that they'd sold the company — to its workers — under an employee stock ownership plan (ESOP).

"It's really just a one-company 401(k) — a retirement plan," the brewer explained in a phone call later. "People get shares, but they're held in a trust. [When] they leave the company or retire, they get cashed out." Current employees will receive shares commensurate with the number of years worked at Switchback. Going forward, employees new and old will vest on an annual basis.

Cherry didn't disclose the terms of the "sale" but said that as long as the company continues to perform well, "I'll do really well for myself," while employees are also in for a generous sum when they retire.

By the middle of last week, Switchback's announcement was all over the news. On social media, employees expressed jubilation. Amid all the fuss, Cherry made time to chat again with Seven Days.

SEVEN DAYS: How does this ESOP change things from an operations standpoint?

BILL CHERRY: That's the best part ... With all the future stuff decided now, I can just focus on running the brewery. I told the employees [last] Monday. On Tuesday morning, we came in to work and every one of us was doing the exact same thing we always do. That's the whole plan.

When you hear "employee owned," you might think that we're going to have votes and stuff, but that's really not the case. I'm [still] the president. Management runs the brewery like it always did. In terms of the [ownership] trust, there is a board of directors, so that's one change, whereas currently it's just Jeff and myself.

SD: So, in terms of choosing folks to take over when you're ready to step out, promotions will follow the established company practice?

BC: I have a crew here right now of roughly thirtysomethings who are really running the show. I'm saying, I'm essentially handing the reins over to you. You're the core group who's going to guide this place in the future.

BC: The fact that I'm not ready to go anywhere makes this easier to do. The sooner you start, the easier it is. The employees already know what's going to happen. So, over 10 years, we can ... say, "You're going to take over this process going forward." But I'll still be here to critique them.

SD: Switching gears: What can drinkers expect from Switchback in 2017?

BC: [In January], we made Citra-Pils [our second] year-round beer, so we're super focused on that right now. We kind of pulled back and looked at the market and said, "We're going to really perfect this lager." Every time we bottle, [some] goes into my fridge [at home]. I want to drink it at different times of day, different days of the week. It's still in this nuanced phase, and I just want to constantly work on it a little more.

SD: A lot of the newer breweries seem to eschew the idea of a flagship beer. Do you feel any pressure to release new brews all the time?

BC: We make one-offs here at the brewery, and we'll package them, but it's just so hard to get it on shelves ... Retailers are overwhelmed, and they're getting less cooperative with it. They call it SKU [barcode] overload, or something like that. It's just too much.

Some of the greatest beers I've had in the world — those iconic beers that have stood the test of time — there's no one thing about them punching me in the jaw about why it's good. There are all these hidden complexities. It drinks so easy, and yet it's doing so much that you're perpetually entertained by it.

SD: You'd just started selling six-packs of bottles the last time we spoke, in late 2015. Why stick with bottles when cans are all the rage?

BC: The thing about cans is, they don't work if you already own a bottling line. We know we're losing out on a certain amount of business — beach and hiking people, camping people. But otherwise, I question how much it matters.

Still, cans could be in our future. But we'll do it our way. Just like we waited 10 years to go from draft only to [offering 22-ounce] bottles — it's going to have to be a really fancy canning line that I feel confident in. I can taste bad canning instantly.

But if you're a new brewery, and there's a mobile canning line that comes around, and you don't have to invest anything — that's a brilliant thing.

SD: How have the six-packs worked out so far?

BC: The [market] environment's getting tougher for growth, but we grew more than 25 percent in volume last year, driven by those six-packs. We'd get comments from the big supermarkets that our six-pack was trending as their No. 1 [beer], and we weren't even in every store. So, it was a good launch.

SD: How has the business changed since you started?

BC: The craft beer business is becoming more of a business than it used to be. There's so much competition. I started with nothing more than a tap handle and a beer. I'm not sure you can do that anymore.

SD: Any sage advice for new brewers coming up?

BC: This is going to sound really hokey, but: Stay inspired. I can spot a beer or a brewer from a mile a way that's making something they don't fully [stand] behind. So brew your passion, and that'll come through. If you really like it, other people out there are going to like it, too.

The original print version of this article was headlined "Selling In"