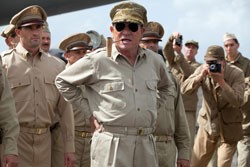 Emperor seems to have been tailor-made for high school history classes whose teachers like to give themselves a break by popping in a DVD. It’s (somewhat) informative about a pivotal moment at the end of World War II, it’s inoffensive and it stars a handsome actor all the kids will recognize from “Lost.”

What Emperor isn’t, in any way, shape or form, is a compelling historical drama. There isn’t much in director Peter Webber’s film to interest moviegoers who aren’t prisoners in a classroom, with the possible exceptions of completist WWII buffs and those who can’t die happy without seeing Tommy Lee Jones apply his curmudgeonly charms to playing Gen. Douglas MacArthur.

The latter should know that Jones has only a handful of scenes in the movie. While you will see him stick a corncob pipe in his mouth and prepare to meet the conquered Japanese with a growled “Let’s show ’em some old-fashioned American swagger,” that’s pretty much the high point of his performance.

Emperor’s potentially fascinating subject is the dilemma the U.S. faced in the wake of Japan’s surrender. Should Emperor Hirohito be tried for war crimes, as the Justice Department urged, or allowed to retain his life and office? Sparing him might make the victors look soft on Japanese militarism, while removing him could open Japan to incursions by a more feared foe, the Soviets. Then, of course, there was the deeper question of whether Hirohito, living insulated in his world of guards and ritual, could be held personally responsible for the atrocities committed by his troops.

The competing political, philosophical and cultural interests at play in this decision might have generated a spell-bindingly intricate procedural along the lines of Steven Spielberg’s Lincoln. But that had a screenplay by playwright Tony Kushner, and Emperor ... doesn’t.

Once screenwriters Vera Blasi and David Klass have established the problem that MacArthur assigns Brigadier General Bonner Fellers (Matthew Fox) to solve in just 10 days, they take a left turn into the realm of soap opera. Fellers, we learn, fell in love with a winsome Japanese exchange student (Eriko Hatsune) before the war. Now he keeps interrupting his official detective work to search for her in the bombed ruins.

While this subplot was reportedly inspired by passages in the real Fellers’ letters, the love story appears to be invention. A pointless, limp, generic invention that takes us away from the real enigma of the emperor so we can watch Fox’s eyes moisten as Fellers recalls frolicking with his beloved in a bamboo grove. Getting moist eyed is about the sum of his performance; Fox seems less like a hard-nosed military man with expertise in psychological warfare than Jack from “Lost” having more sad flashbacks about his daddy.

True, the long detour into Fellers’ personal life occasions an informative visit to a crusty Japanese elder who schools him in the culture. But what he learns about tradition and loyalty won’t come as a surprise to anyone with a passing knowledge of Japan. It’s also packaged with the subtlety of a classroom lecture, like most of the film’s dialogue.

A sample: “Staving off the Soviets is the plight of our times, Sir,” Fellers informs Mac Arthur at one point. Chances are the general already knew that. But the exposition could come in handy for the bored teenagers who are sure to be the largest audience for this flick in years to come. Wake up — time to take notes!