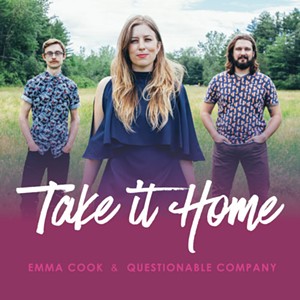 In 2016, Burlington's bluesy, pop-rock band Questionable Company added singer-songwriter Emma Cook's name to their official title — and rightly so. Not only is she the group's sole scribe, she also plays keys and guitar, the melodic instrumental leads for all of their songs. Bassist Max Guyton and drummer Andy Feltus lay down a solid rhythm section, but Cook is out on the front lines.

Take It Home is the follow-up to their self-titled 2015 record (when they were simply Questionable Company). The new one is short — seven tracks and a run time just shy of 30 minutes. But it packs a powerful punch and leaves the listener wanting more, especially because the songs grow more compelling as the record progresses. The overall production quality is sharper and glossier than on previous efforts, too. It feels like Cook and her cronies have arrived at their destination.

On the album's 63-second opening track, "I Know a Place," the first sound we hear is Cook's voice — which we can add to the list of her many strengths. It reinforces the fact that this is her work and, because keyboard is her main instrument, so does a subsequent series of pointed piano chords. Cook greets us with warm, wistful words: "I know a place where we can be truly free / That's where I want to be / I want to take you there." It's not the most original line ever written, but it sets the album's inviting tone.

"Walls Closing In" is the record's catchiest cut. Producing a delicate organ line and a loose, shuffling drumbeat, the group is locked into a tight, intimate groove. The cut has a call-and-response hook that gets smoother with each pass. And for a song about anxiety and existential panic, it's incredibly relaxing. Perhaps music itself is the songwriter's cure for apprehension.

Cook mostly refrains from layering in self-harmonies, but when she does it adds a flourish. It's a small moment, but on "Coulda Made It," she adds a high harmony to the line "We coulda made it if we hadn't gotten so stoned." I don't know why, but it makes me smile. With this song the group dips its collective toes into electro-pop territory, a departure from the soulful rock that precedes it. But synths and drum-machine snares mesh nicely with Cook's jangly guitar chords.

The album's closer, "Nashville," is a country-tinged, road-trippin' ballad. Cook slows the beat by half as the song moves into its chorus, a dynamic trick employed earlier on "Heart and Break" — although that song switches from slow to fast at its climax.

Take It Home is a fun, breezy album for people who like uncomplicated pop rock. Cook is a formidable songwriter and instrumentalist and will likely continue to impress on future efforts.

Take It Home by Emma Cook & Questionable Company is available on iTunes.