Emerging Architects and Designers Get a Read on the Library

What kind of public library addition, renovation or satellite structure would you design if you had a limit of 2,000 square feet and an unlimited budget? How about an inflatable plastic walk-in bubble containing computer stations? Or a mobile foldout maker space where library patrons can use welding tools or a sewing machine? Or an interactive digital common space that posts computer users' search words on a running overhead ticker?

These ideas were among the inventive proposals submitted from around New England for "Engaging the Public Library," a conceptual design competition sponsored by the Vermont chapter of the American Institute of Architects. The competition wasn't for established architects but for "emerging professionals" — a group that includes not-yet-licensed architects (often called designers) within 10 years of graduation and newly minted architects within five years of licensure.

Eight practitioners in this category, living and working in Connecticut, Massachusetts, New Hampshire, Rhode Island and Vermont, submitted competition boards for a chance at the AIA-funded prizes of $1,000, $500 and $250. All the boards are currently on display at, fittingly, Pierson Library in Shelburne, beside a tandem exhibit on the built structures that won this year's AIAVT design awards. A public reception is planned for Thursday, July 10, before the dual exhibit goes on tour around the state.

Public libraries, with their perpetually pinched budgets, may strike some as a surprising choice for a sky's-the-limit design competition. But Andrew Chardain, director of the Emerging Professionals Network at AIAVT and a designer at TruexCullins in Burlington, demurs. "In Vermont, we're very aware of the practical side of things, but I think it's important to try to push ideas," he says. "If you don't have people coming up with ideas that don't yet exist, you'll always have the same things you already have."

Chardain was one of four emerging professionals who hit on the library idea for this second annual EPN competition. (Last year's involved farm stands; the results were exhibited at the Waitsfield Farmers Market.) He was joined by Adam Lemire, of LineSync in Wilmington, and Chardain's fellow Truex designers Cam Featherstonhaugh (EPN's founding director) and, briefly, Joshua Chafe. Chafe dropped out when he realized he wanted to submit a proposal; he ended up winning. 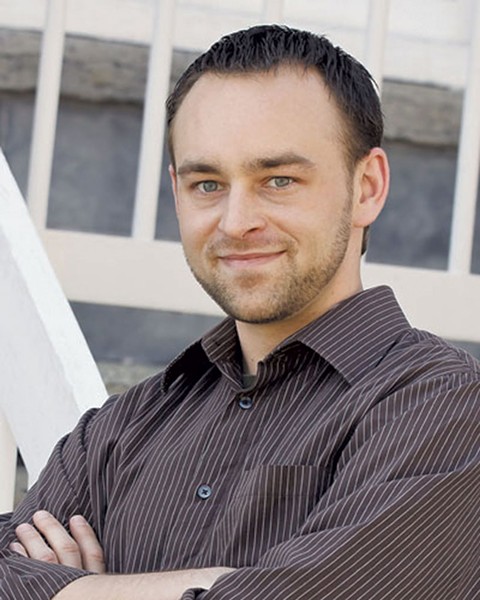 The competition brief they wrote points out that, far from being outmoded, New England libraries currently have soaring visitor counts. The architecture professionals were called on to imagine how to make libraries relevant "for the future" — a clear invitation to dream up the near-impossible.

A bit of that appears in the third-place winner's idea, called "Common Core" by Timothy Olson of the New Hampshire firm Bensonwood. Olson proposes inserting a civic space inside a traditional New England library and raising the section of roof above it to create a "flyloft." This added vertical space, outfitted with pulleys, would allow librarians to hang stacks of library furniture on cables like sculptural chandeliers while the space below is reconfigured for a farmers market, art gallery or dance hall.

The winning entry by Chafe is more idealistic than unrealizable. He proposes converting the triangular green space facing the Integrated Arts Academy at H.O. Wheeler in Burlington's Old North End into "The Book Park." Imagined as an "inside-out" library with stacks facing sidewalks and open-air passages, the sleek, stacked-plywood structure would allow for informal borrowing and never need to close.

Chafe, 33, who moved from Burlington to Milton last year, says he found his inspiration in the spreading cult phenomenon of "little free libraries" — tiny shelved structures people are placing on their lawns and in offices to encourage free book sharing. "Ideally, it would be open to all at all times," Chafe says of his proposal. "In reality, it might have to be proctored."

Library aficionado and activist Jessamyn West of Randolph, who helped jury the competition, knows a 24-hour library is impractical, but she cherishes the idea. In fact, all the entries impressed her for being wildly different from one another, as well as "different from something I would do," says the 45-year-old community technology librarian at Randolph Technical Career Center.

Chardain asked West to join the jury after spotting her profile in Seven Days. The librarian added her voice to those of two architects — TruexCullins principal emeritus Bill Truex and Melissa Fletcher of MGF Designs Architecture in Shelburne — and AIAVT executive director Carol Miklos, a self-described "avid library user."

At first, West's perspective inevitably leaned toward the practical. "All of these [entries] I looked at with my librarian eye and said, 'Oh. That's expensive,'" she recalls with a chuckle. "We're public and nonprofit. But a lot spurred ideas with me."

West also realized that proposals such as the inflatable computer lab, while "a little moon-landing-y," were not much more futuristic than recent developments at major libraries around the country.

"At New York Public Library and Chicago Public Library, you can check out an internet hot spot and bring it home," West notes. And libraries in Detroit, Mich., and Fayetteville, Ark., already offer maker spaces outfitted with tools such as 3-D printers and vinyl cutters. Jurying the competition enabled West to "see that architecture is more responsive to the culture than I'd realized," she says.

West notes that Vermont's 183 libraries, which she's documenting one by one on her blog, don't necessarily need to change if they're meeting the needs of their communities. "Some do well being a glorious cathedral of books," she says; others adjust to the local population by, say, offering a jigsaw-puzzle section, as Pierson does for Shelburne residents, or by eliminating late fees. "Most communities in Vermont love their libraries," West says.

What the competition made clear, West observes, is the importance of libraries as "a public space that's not a church or a town hall." Nearly all the entries tied the future of libraries to their capacity for community building.

Second-place winner Clair Colburn, of Schwartz/Silver Architects in Massachusetts, for example, designed "INFOtecha" — that interactive digital space — to be a "new ... paradigm for [the] New England common." Patron interactions are key in her proposal: Overhead LED lights change from cool to warm colors as more users enter the space, and their communal interactions are "chronicled" by reconfigurable benches that can be lifted from flattened positions in the floor.

Chardain ultimately hopes the proposals spark ideas among librarians. "The one with the bubble, it's not very practical," he admits. "But there's something about that idea that could, at some point, revolutionize something in libraries."

Even if no one can yet imagine how.

The Magnificent 7: Must See, Must Do, October 29 to November 4

Rapid COVID-19 Tests Have Arrived in Vermont, but Some Officials Are Leery
Top Stories