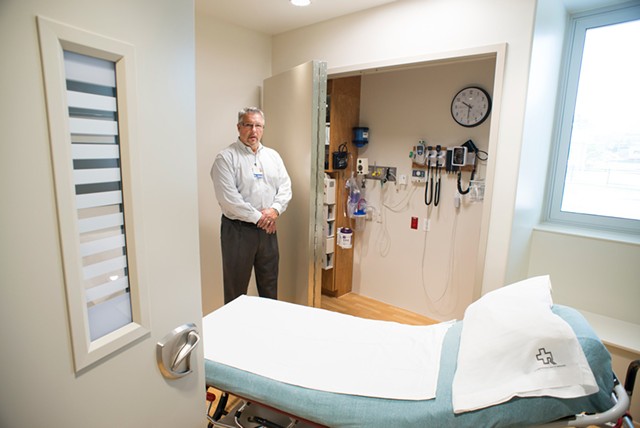 The space is painted a soothing sage green. There's a chalkboard on the wall and a video camera on the ceiling. The door is designed so that no one can barricade it from inside. Every detail, down to the placement of the paper towels, is purposeful.

It's one of five new rooms in the Rutland Regional Medical Center's emergency room built to accommodate a surge of patients arriving in psychiatric crisis. The $6 million ER expansion includes a shared common room with a TV and a cart stocked with checkers, chess and coloring books. Patients can watch Netflix on individual tablets. The hospital has hired "patient safety associates" and purchased 40 new cameras for monitoring purposes.

Across Vermont, hospitals are making similar investments to cope with a major influx of patients that ERs were not designed to serve. They are spending millions to hire mental health specialists, hold staff trainings, purchase video monitoring technology and add new emergency room beds.

It's been nearly six years since Tropical Storm Irene destroyed the Vermont State Hospital, prompting officials to rebuild the mental health system with fewer treatment beds in institutions and a greater emphasis on community-based services. That transition coincided with a rise in demand for mental health treatment nationwide.

The result has been overcrowded emergency rooms where psychiatric patients in crisis come for help — and sometimes wait for days on end to be transferred to a treatment center.

The chaotic environment can put more stress on people grappling with mental illness.

The Green Mountain Care Board is about to begin reviewing hospital budgets, an annual ritual during which the regulators scrutinize the revenue and expenses of the institutions to make sure they aren't spending or billing excessively. Many of the state's 14 hospitals are seeking to make major investments in emergency room mental health care in 2018.

The Vermont Department of Mental Health has praised these efforts, but some worry they'll backfire. Rep. Anne Donahue (R-Northfield), a longtime mental health advocate, deems the investments "a very negative thing because they are institutionalizing bad, inappropriate delivery of care." But, she conceded, "They're probably a critically necessary thing because of the mess we have let our services become."

Even some hospital administrators say they're concerned that reconfiguring their emergency rooms to accommodate these patients will make the status quo more palatable for policy leaders.

"There is a danger that it will be convenient for various reasons to look at the hospitals' emergency department modifications and say, 'They have a plan; we don't need a plan,'" said Dr. Robert Pierattini, chief of psychiatry at the University of Vermont Medical Center.

The Burlington hospital is hiring 30 people to provide one-to-one supervision of patients, at least half of whom have psychiatric needs. That brings the total number of patient-watchers to 78, a $3.8 million expense. The medical center has spent $310,000 on video equipment to monitor patients who aren't suicidal but still need supervision. It plans to add new, separate pediatric and adult mental health spaces in the ER to give patients a calmer place to stay, with access to private showers and bathrooms.

"It's a stopgap measure," said Pierattini. "We don't have any choice but to keep people safe." But, he pointed out, "Emergency departments will never be inpatient psychiatry units."

Ten psychiatric patients were in the UVMMC ER waiting for beds last Thursday, he said.

Berlin's Central Vermont Medical Center has already built what it calls a transitional care area for psychiatric patients — a secluded suite with three rooms painted with colors such as Bahamian blue and designed without fixtures that could be used in a suicide attempt. Two staff members keep watch from an adjacent observation room with a large window.

When asked whether the new addition has been a success, Dr. Philip Brown, CVMC's vice president of medical affairs, hesitated. "It's been amazingly successful in two ways," he said. Incidents in which a patient must be physically restrained or medically sedated are down 80 percent; staff injuries have been cut in half.

On the other hand, Brown said, "We knew that if we built it, the numbers would go up." As he predicted, the number of patients coming to the ER with mental health needs has "risen dramatically" since the transitional care area opened. More than 1,000 patients have stayed there during the year it's been up and running. When Brown came to work on August 2, the ER housed eight "boarders," the term for psychiatric patients awaiting a treatment bed.

CVMC has trained more than 300 employees to manage distraught patients. It has assembled a team of 40 mental health professionals who are on call 24/7 to respond to the more serious crisis situations.

In documents filed with the Green Mountain Care Board, the hospital reported that it has spent more than $1.4 million on these efforts.

Did administrators there have any concerns that building more emergency room capacity would reduce the sense of urgency needed to address shortcomings elsewhere in the mental health system? "It was certainly a question," Brown said. "But the fact of the matter is, we have a crisis."

Even the state's smallest hospitals are making investments. Earlier this year, 19-bed Grace Cottage Hospital in Townshend converted a former ER waiting room into a "safe room" for mental health patients and added a social worker to its staff.

"We have a hospital system that has so little regard for people with mental health needs that they didn't even contemplate their needs when they were building their facilities," she said. "To the extent that they're trying to rectify that historical discrimination, it's a good thing." But, she added, hospitals still need to focus more on training staff.

She agreed with those who see a risk of "normalizing a situation" in which patients stay in what she called "holding tanks" as they wait for treatment.

Donahue, the state legislator, worries about the unintended effects of segregating mental health patients in the ER, which she likened to "putting this huge flashing neon sign on people's foreheads saying 'psychiatric patient.'"

"I think that creating new spaces in emergency departments is not addressing the underlying problem," said Ed Paquin, executive director of Disability Rights Vermont. His organization is floating a longer-term solution to keep people out of the ER: creating a place with several homey rooms and support staff to help people who are in crisis but don't need emergency medical care.

"Crisis drives so much of what we do, so I can understand people's concern," said Mental Health Commissioner Melissa Bailey. She insisted state officials won't stop their efforts to improve mental health treatment in all settings, noting that they're exploring the concept proposed by Disability Rights Vermont.

"Having hospitals have better resources to manage people with mental health needs is not a bad thing," Bailey said. She added, "What [also] needs to happen is people need to move to the next level of care more quickly."

The Vermont legislature has ordered the department to come up with an interim plan to address the mental health system's shortcomings by September and a comprehensive plan by December. Those proposals are likely to carry a hefty price tag, making them a hard sell.

Complicating the task, there's not even a consensus on what's causing the problem. One camp echoes Bailey's assertion that the real issue is getting people to move more rapidly from acute-care beds in treatment facilities to less-intensive care; the other camp, which includes Pierattini, contends that Vermont still needs more acute-care beds.

Pierattini offered a metaphor for the situation hospitals find themselves in: "Imagine a community that lost its firetruck, and all of the townspeople go out and buy a bucket in case there's a fire. That's what's happening. We're buying buckets."