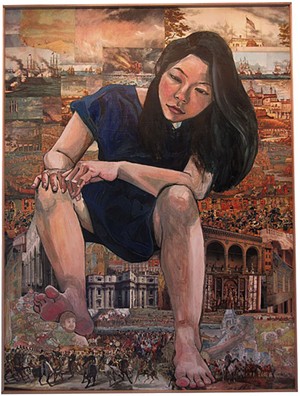 Until last month, Shelburne-based painter Misoo supported herself by teaching drawing classes at Burlington City Arts and the Shelburne Craft School and working part time at Frog Hollow Vermont Craft Gallery on Church Street. Then the coronavirus pandemic hit, and all of her income disappeared practically overnight.

After closing its doors on March 23, Frog Hollow kept its staff on payroll until the first week of April. As soon as she got her last check, Misoo applied for unemployment, an experience reminiscent of an absurdist Samuel Beckett play. For one entire day, she dialed the assistance number "like, 60 times an hour," she said. The line was always busy.

To help artists like Misoo, the Vermont Arts Council has begun offering no-strings-attached emergency relief grants in amounts up to $500. The first round, announced in mid-April, distributed $64,435 to 164 artists; a second round opened on April 22, funded by private donations and a $47,000 grant from the New England Foundation for the Arts. Meanwhile, BCA has rolled out its own emergency grant program, which will provide up to $500 in assistance to artists who have lost income due to the pandemic.

Vermont's creative workforce comprises 9.3 percent of the state's economy, accounting for some 40,000 jobs, according to the Vermont Arts Council. In the midst of a public health crisis that has gutted the arts, entertainment and service industries, those creative workers have found themselves in dire straits.

Misoo received a $450 grant from the arts council, which doubled her earnings for the month. "It makes such a difference," she said. "It helps pay for food. I'm not even thinking about buying art supplies right now."

The application process was a breeze compared to trying to connect with a human being at the Vermont Department of Labor, Misoo noted. After nearly two weeks of relentless dialing, she finally succeeded in getting her unemployment claim processed. Her benefits, she said, amounted to 45 percent of her monthly Frog Hollow salary. Misoo also was approved for a low-income discount for her utility bills, but she said that her property manager refused to give her a break on rent. ("At least they can't evict us," she said.)

Amy Cunningham, deputy director of the Vermont Arts Council, said that the response to the emergency relief program has been overwhelming, both in terms of volume and the heart-wrenching stories in every application. Six days after the form went live, 183 people had submitted requests for funding.

"We're seeing the waves of economic distress," she explained. "We're getting lots of applications from artists whose residencies and workshops have been canceled, which is a major loss of income. And perhaps they have a studio space in a collective arts center, which has also closed, so they can't even access that to make their work. And many of them are bartenders and servers, and that's been ripped out from under them, too."

Misoo paints large-format portraits of Asian women and domestic abuse survivors; the face-to-face intimacy of meeting subjects in person is a critical part of her process. "I go to their houses, they tell me their stories, and I take their photos," she said. "I can't do any of that now."

Instead, Misoo has turned the mirror on herself to create works for a show this July at the Southern Vermont Arts Center in Manchester. For now, the exhibition is still on the calendar. In the meantime, Misoo tries to stay grounded by focusing on the small joys of her new, schedule-free reality.

"I'm enjoying the time with my daughter, and I'm really enjoying making my art," she said. "I used to have so many deadlines, one thing after another. Now, I create with a more peaceful mind."

Learn more about, or donate to, the Vermont Arts Council's emergency relief grants at vermontartscouncil.org and the BCA Artist Relief Fund at burlingtoncityarts.org.