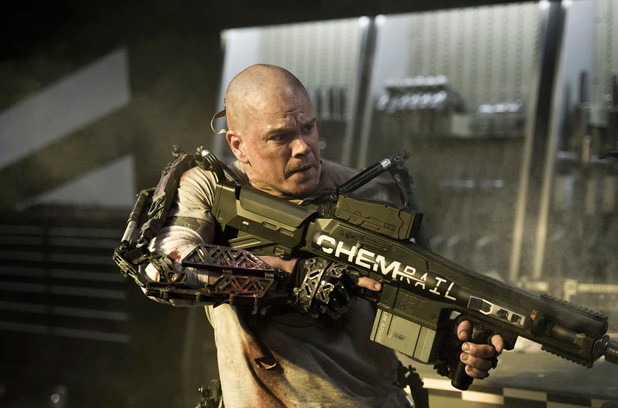 Sci-fi dystopias aren’t just for nerds or English classes anymore. Blame it on the recession, the president, the NSA or whatever you want, but right now, action-packed updatings of 1984 and Metropolis are mainstream in fiction, video games and film.

So far, however, none of the Hollywood movies that have attempted to explore those themes without focusing on a plucky teenage archer have met with much success. Andrew Niccol’s In Time trumpeted an Occupy-style egalitarianism, but its scenario was just too absurd. The Purge was easily purged from memory.

Now comes Elysium, an effort to build on the good will that South African writer-director Neill Blomkamp earned with District 9, a shoestring dystopia that became a surprise hit. Blomkamp tries to do a lot with this more expensive futuristic epic: to visualize a future where Earth is one giant slum; to comment on immigration, gated communities and health care; to provide a showcase for his District 9 star, Sharlto Copley; and to satisfy both genre fans and moviegoers who just want to see Matt Damon punching people.

No wonder the movie feels like it has a severe case of the jitters. With the focus so scattered, the story never gains the core it needs to make us care.

That core is supposed to be Matt Damon’s Max, a working stiff with a prison record. He lives in LA, which is itself a prison sentence of sorts, because it’s 2154, and the rich people have fled from toxic, overpopulated Earth to a satellite called Elysium that looks like a giant country club. When the elites fall ill, they step into magic health machines and emerge cured (it’s as silly as it sounds). Meanwhile, back on Earth, robots keep the masses working for the Man.

Naturally, everyone dreams of boarding an illegal shuttle and zipping across the “border.” But the neo-version of Homeland Security, helmed by Jodie Foster, doesn’t hesitate to use lethal force. An unlikely chain of events puts Max in a position to threaten Elysium’s defenses, making him a wanted man and giving Damon reasons to punch people. A lot.

Max undergoes enough near-deaths and physical transformations for several superhero origin stories, and Blomkamp tugs at our heartstrings with flashbacks to his street-waif childhood. Yet we never really know him: The blank-slate act that worked for Damon in the Bourne movies simply makes him into a placeholder here. Max’s childhood sweetheart (played as an adult by Alice Braga) never becomes more than a generic, dewy-eyed Oppressed Person, either.

Foster’s character — a fascist who believes her own rhetoric — has potential, but the actress has chosen to play her with neither nuance nor a sense of fun. We get at least the latter from the baddies played by William Fichtner and Copley. They appear to belong in a pulpy, self-aware Paul Verhoeven flick, but the rest of the cast didn’t get the memo.

Or, more likely, Blomkamp hasn’t figured out what he’s doing, as the movie careens from the satire of Brazil to the cartoonishness of RoboCop to the stiff earnestness of Niccol’s work. The future LA the director has created using a combination of real slums and CGI is deliciously overgrown and grimy, and it’s refreshing (for a Hollywood movie) to see the city populated mostly by Spanish-speaking nonwhites. But for every detail that rings true, Elysium offers an allegorical anvil like that insta-healing technology. (If such a thing existed, I’m guessing the elites would use it as another tool to keep the populace in line, rather than simply hoarding it.)

District 9 also combined a gritty setting with a frequently ridiculous plot, but its unique antihero made it work. In Elysium, we’re told we’re witnessing Max’s journey from selfishness to social consciousness, but the guy exhibits less character development than his chrome-dome twin Vin Diesel in your typical Fast & Furious movie. He needs a personality injection, and no magic health machine can oblige.