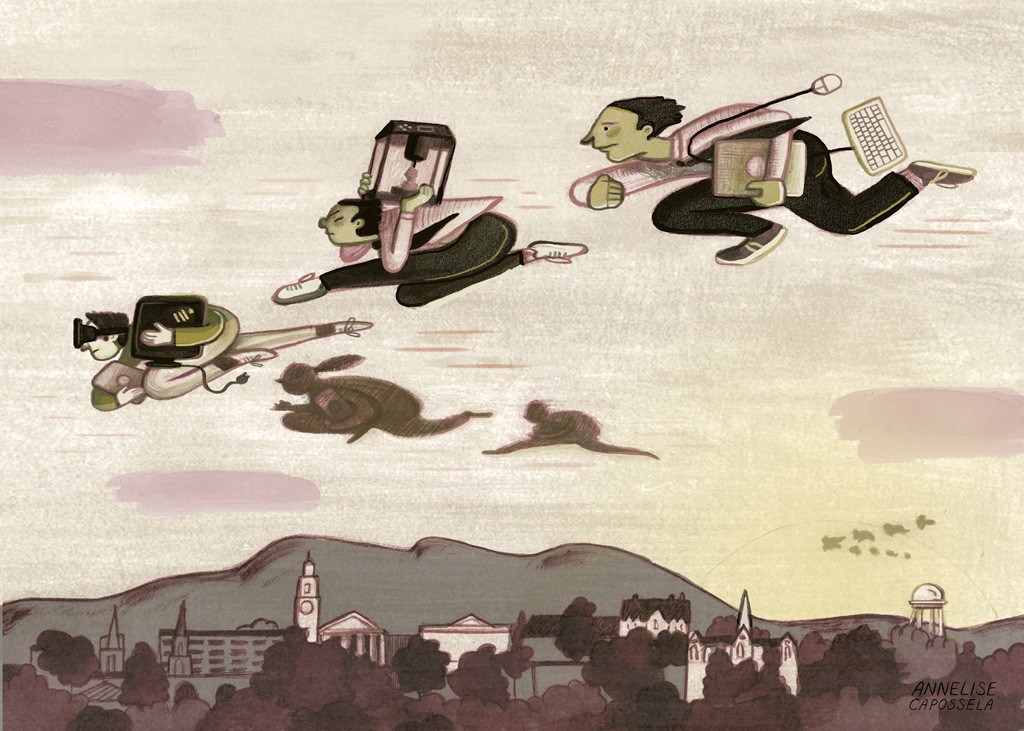 Officials have held up these companies as proof that Vermont, despite its small population and spotty internet, can give rise to high-tech startups.

But can it keep them?

Earlier this year, IrisVR relocated to New York City. Last month, Blu-Bin packed up for Silicon Valley. And Ello has just two employees still working in the Queen City — the rest are in Colorado. The companies left in search of bigger markets, more networking and greater employee satisfaction.

Ello had startup stardom written all over it. In a matter of weeks, the company went from a niche platform favored by artists to a national phenomenon — prompted by a mass migration of LGBTQ users who left Facebook because the site required them to provide their real names.

Paul Budnitz, who previously founded Budnitz Bicycles and the toy company Kidrobot, started Ello at the Karma Birdhouse, a coworking space in Burlington. Although it was cofounded with six people in Colorado and has always had workers in the Rocky Mountain State, the company capitalized on its Vermont origins.

Comparing Ello's ad-free policy to Vermont's billboard ban, Budnitz told the online news site VTDigger.org: "We're aiming to be the Vermont of the internet." At the height of hype last fall, the Berkeley-born Budnitz, who splits his time between New York and Vermont, also predicted he'd hire dozens more Vermonters.

Months later, only Budnitz and his personal assistant are working in the Green Mountain branch, amid steel and titanium bicycles at the Pine Street rooftop office of Budnitz Bicycles. In an email, Budnitz explained that Ello's Vermont contingent dwindled when two employees asked to relocate to Colorado and a few others moved elsewhere for their spouses' jobs.

His updated prognosis for Ello's future: "It's most likely that the company will continue to grow mostly in [Colorado], just because there are more people there, but you never know. Some of the employees in Colorado are actually talking about coming out here for extended periods ... I'm personally committed to Vermont and won't move. If it makes sense to grow more here in the future, that'll happen!"

During his budget address last January, Gov. Peter Shumlin declared that "the spirit of innovation is alive and well all around our state." Calling particular attention to a "new wave of high-tech startups," the governor name-dropped both Ello and IrisVR as evidence.

That same month, the young founders of IrisVR secured a coveted spot in New York's Techstars accelerator program, which nurtures startups — the equivalent of getting accepted at Harvard, according to Vermont venture capitalist Cairn Cross of Shelburne-based FreshTracks Capital.

The Midd kids started to split their time between a Times Square office and their Karma Birdhouse headquarters. At the end of the Techstars program, they opted to stay in New York. Cofounder Nate Beatty, a fast-talking physics major, explained that they wanted to stay close to the network of investors and mentors they'd cultivated at Techstars.

Also, New York is home to a large number of acclaimed architecture and design firms — potential IrisVR clients. "It's cool to be able to walk across the street into some of the biggest architectural firms in the world and say, 'OK, how are we going to help you visualize your next project?'" said Beatty.

The company had previously struggled to lure employees to Vermont, Beatty said. "We were like, 'Hey, do you want to come up to Burlington?' And they were like, 'No.'"

Another factor in their decision to move: money. Beatty and cofounder Shane Scranton began their business at the Vermont Center for Emerging Technologies' incubator space in Middlebury. Last year, they won the annual LaunchVT competition, which pairs startups with mentors and ultimately awards the winning company a cash prize. The $25,000 check that the founders took home, along with $45,000 of in-kind benefits, helped jump-start the software company, but it pales in comparison to the $1.6 million round of seed-funding that IrisVR recently finished in New York.

"The market for capital in Vermont couldn't sustain the business that we wanted to grow," Beatty said.

Vermont has few sources of venture capital other than FreshTracks Capital, which participated in IrisVR's latest round of funding.

Blu-Bin cofounder Alder (formerly known as Dan) Riley said he, too, struggled to find angel investors while in Vermont. And those who did show interest insisted that such an enterprise should be in a bigger market, Riley said. "Their conditions were always, 'You have to move the company out of Vermont.'"

Riley and cofounder Dave Newlands first moved their 3D printing business from Poultney to Burlington, where they started churning out objects in a shop on Church Street and at a kiosk in the Burlington Town Center mall.

More recently, they reluctantly moved to Silicon Valley and last Friday opened a kiosk in San Jose's Great Mall, which attracts 21 million people annually, Riley said. Investors are already knocking on their door. "You gotta go where the market is, and it's simply not in Vermont," he said.

People steeped in Vermont's startup scene warn against reading too much into these departures. In an industry known for its optimism, their upbeat assessments aren't exactly surprising.

"We're gonna win some and lose some," said David Bradbury, president and CEO of VCET, a nonprofit that operates three coworking spaces and provides seed funding for startups. Bradbury noted that VCET has small ownership stakes in Ello and IrisVR.

Eager to turn to good news, he began describing thriving startups that have so far stayed put — Faraday, a data visualization company for marketers, and Cloudfarm, which is developing software to design gardens. Bradbury also noted that Budnitz has expanded his luxury bicycle company. And he rattled off new initiatives that are nurturing startups, such as Castleton University's entrepreneurship program in Rutland, the business incubator at Burlington's Generator and several business-pitch competitions.

One initiative — FreshTracks Capital's annual Road Pitch, during which motorcyclists tour the state "in search of the best and brightest entrepreneurs" — takes place next month. Like Bradbury, Cross, who is a partner at the firm, isn't too concerned about an exodus of entrepreneurs.

"It's possible for companies to be more virtual than they have in the past, and it's possible for them to have teams spread across the country or the world, and I think that actually bodes well for Vermont," Cross said, citing the state's "quality of life" advantages — craft beer, ski mountains and more.

Which isn't to say the state should take a laissez-faire approach, Cross clarified. Describing Vermont officials' attitudes toward economic development as "a bit outdated," he argued that the state should care more about nurturing startups than wooing already-established companies, which he described as "like hunting whales in an open boat with a harpoon ... Meanwhile there are all these fish around that you could hook."

But even the entrepreneurs who've been hooked say it's hard to make it work.

"It is a challenge," said Aaron Pollak, cofounder of Designbook and a Vermont native. "We struggled through it because we wanted to be in Vermont." Sitting at a rustic wood desk overlooking Church Street, Pollak explained that his company, which provides an online platform for startups to connect with investors and other resources, was founded in part to "start to break down geographic barriers" and "democratize the access to capital."

But Pollak says he'll still need to hire employees in cities like Austin, Texas, to recruit customers and act as "brand ambassadors."

He described the "overall cost of doing business" in Vermont as another hurdle, but he acknowledged that some of the common complaints heard from established businesses are less of an issue for startups. High taxes, for instance, are unlikely to stymie a startup that isn't making any money yet. Others mentioned the high cost of living as an obstacle, but Pollak pointed out that entrepreneurs often migrate to even more expensive cities.

While it's easy to work remotely, location still matters. Starting a business in a place where a critical mass of other people are starting — or funding — new ventures brings significant benefits.

Marguerite Dibble of Starksboro, who created Gametheory before she graduated Champlain College, said she had to adjust her business model in order to stay here. "In Vermont, we have people who focus on quality of life above career opportunities," she said, noting, "I'm sure we would have more clients if I was in New York or Austin or Boulder." Dibble is committed to staying put, but she doesn't expect all of her employees to stick around; one recently moved to Boulder because his partner got a better job there.

George Schildge, founder and CEO of Matrix Marketing Group and self-described serial entrepreneur, splits his time between Vermont and Colorado. Here, he started a local chapter of the national group Startup Grind, which organizes gatherings for entrepreneurs. Schildge said young Vermonters frequently tell him, "I don't see this as a vibrant startup community." He's confident Burlington can become one, but, listing several accelerator programs in Boulder, he suggested that the Queen City is behind the curve.

He did, however, dismiss complaints about the dearth of investors. "That is a rookie, immature thing that I hear all the time," he said. Noting that he personally can put people in touch with investors around the country, he said his response to this lament is, "How much do you need?"

Cross' response to the alleged shortage of investors? Places with more capital also have stiffer competition.

Bradbury noted that an increasing amount of venture capital is available in Vermont — as the employees of maturing companies such as Dealer.com and Keurig Green Mountain seek investment opportunities. Of course, the state could use more, Bradbury noted: "If I could just wave my hand and see something appear here, it would be a funder that could invest $1 million or $3 million a year in early-stage deals."

While substantial early funding didn't come soon enough for IrisVR or Blu-Bin, their founders remain optimistic about Vermont: Riley wants to reopen Blu-Bin shops in the state once the company is better established. IrisVR's Beatty said, "Hopefully, someday we'll open up a satellite office in Burlington, and then I can move back."