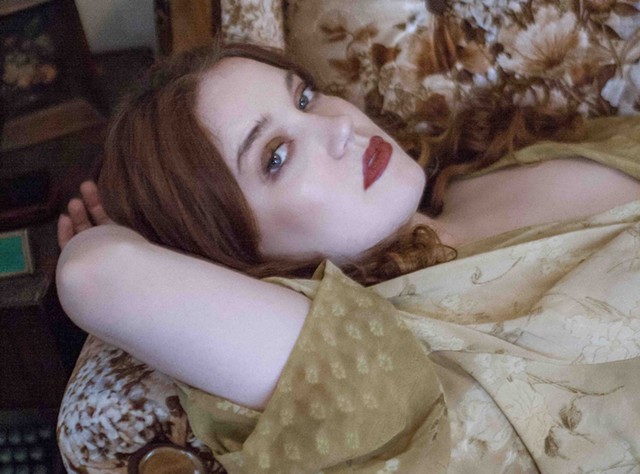 Anna Wise believes the time for silence is over. The Brooklyn-based electronic R&B artist no longer wears headphones while riding the subway, so that she can be alert to step in and defend anyone who's being marginalized or attacked. Similarly, her outspokenly feminist music stands tall in the face of sexism and misogyny.

Wise started her music career in the late 2000s in the art-pop duo Sonnymoon. Soon thereafter, hip-hop superstar Kendrick Lamar recruited her for his albums good kid, m.A.A.d city, untitled unmastered. and To Pimp a Butterfly — the last of which earned Wise, Lamar, and collaborators Bilal and Thundercat a Grammy for the track "These Walls."

Just over a year ago, Wise released her first solo EP, The Feminine: Act I. It contains the track "BitchSlut," which points out the lose-lose scenario women regularly face in matters of personal expression and sexuality. She sings, "If I say no / I'm a bitch / Say yes / I'm a slut." There's also the self-explanatory horror of "Decrease My Waist, Increase My Wage."

Wise preaches her message without compromising her artistry — no spoon-fed "We Are the World" anthems here. Her latest EP, The Feminine: Act II, continues to push the boundaries of contemporary electronic R&B. She boldly balances the avant-garde with bump-and-grind beats and languid, memorable hooks. Though Wise performs solo, she does so with enough samplers, loop pedals and other gear to round out a full-band sound.

Wise opens for Lewis Del Mar on Wednesday, April 19, at the Higher Ground Showcase Lounge in South Burlington. Seven Days recently caught up with her by phone.

SEVEN DAYS: I read that you like to speak in metaphor. How would you metaphorically describe your career over the last year or so?

ANNA WISE: I would describe it like a formerly blind, regenerating butterfly that didn't know it was a butterfly. Everyone was treating it like a butterfly, and [it] just kept giving itself to this beautiful day and flying around — but it was for the amusement of someone who could see it. And it couldn't see itself, and couldn't understand why she was being considered as such. And then, one day, the butterfly regenerated and was like, "Holy fuck! I can see, and I'm a fucking butterfly! This is dope! I'm gonna be that now."

SD: I guess because it didn't end up where I thought it was going to end up.

AW: To speak literally on that metaphor: Women are taught not to hone in on our skills and be proud of what we're doing in some ways, especially when it's not, like, being a mother or a wife or something. Not that those things aren't something to be very, very proud of. I guess I didn't see myself, is what I was trying to say. And now I do, and I'm feeling pretty good about [it].

SD: I really like your song "Self on Fire."

AW: Thank you! That's my favorite one! I didn't think anyone was going to like that song. I really follow my artistic instincts to the point of what I would almost consider self-sabotage. I have to do what I have to do. That's why I love not being signed to a label and not having to answer to anyone. I can't imagine the head of a label being like, "Oh, yeah, 'Self on Fire,' that's the one."

But anyway, that is the only song on the record that I [made] completely by myself. That's just another reason to feel super proud. I write all the music and the lyrics, but I [always] had a coproduction credit or other people who produced for me.

SD: In that line "He don't know how to respect me," are you singing about an imagined relationship or something from real life?

AW: Real life. Not current real life, but past real life. I've been working through an experience that was traumatic. I used to identify myself by that experience, and I felt that if I wrote these songs about it, I could just get it out and that that would be some sort of therapy. And I figured that a lot of women have gone through the same thing, and I haven't seen or heard a lot of songs that dealt with that subject. It definitely was super therapeutic to write about it.

SD: It seems like nature and water play a big part in your visual storytelling. How are they connected to your songwriting?

AW: I love nature so much. I love the Earth. I don't know if I can say specifically how it enters into the realm of my songwriting. But in terms of my lifelong journey with water, I used to be terrified of large bodies of water. Like, going into them, [being] on vacations with my family and refusing to get in the lake because I couldn't see the bottom.

Even being in the pool and having this weird fantasy that a shark could just bust up the bottom of the pool at any second. In my adult life, I've found myself pursuing the things that I used to be afraid of.

SD: In an interview with Rock On Philly, you said that you "pick and choose" your teaching moments. Care to share a recent one?

AW: In Austin, after South by Southwest, we were staying with my friends who took us to this house party, and everyone started playing Mario Kart. And this one guy was like, "Yo, I'm gonna beat you playing with Princess Peach." He was talking to this girl who was beating everyone in the game. Like, seven people in a row.

And all the guys were getting so embarrassed because a girl was beating them. I looked at him and I was like, "Why is that shocking? Because she's the only girl character?" He was like, "Whoa. Actually, yeah. You're right. I shouldn't have said that."

SD: Have you ever been involved in musical theater?

AW: Yes, I dabbled in musical theater, but I could never [stay] in character onstage. I was in Guys and Dolls in high school — I think the character was named Sarah. I burst out laughing onstage multiple times. In my meta-mind, I'm like, This play is so funny, all these people sitting down watching me pretend to be this person. Ha ha. And then I just burst out laughing.

AW: I don't know. I kind of realize those metaphors after I'm done with [a record]. But I think it would be a big party. And maybe within that room the walls would fall down, and that room spreads out like air [and] saturates the rest of the land with its message.

The original print version of this article was headlined "Metaphorically Speaking"