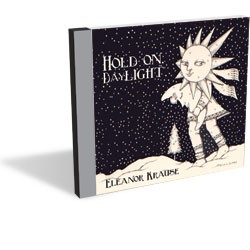 A sense of willfully naïve optimism pervades the debut release from Burlington-based songwriter Eleanor Krause. Its very title, Hold On Daylight, evokes images of twilight in January, at that moment when ice-encrusted souls braving windswept city streets pine for five more minutes of sunlight to see them home. But then, maybe Krause has reason for optimism. As we trudge toward spring, the days do indeed grow longer and, eventually, the world thaws. As Clem Snide’s Eef Barzelay once sang, “Summer will come, with Al Green and sweetened iced tea.”

This collection of sparse, mostly guitar-and-vocal suites yearns and yields in much the same way. Gentle acoustic lines swirl like snowflakes beneath a street lamp on the opening title track. Krause’s voice cuts through the airy drift with brisk clarity. Her delivery is both forthright and vulnerable, as though she’s resolved to brace herself against the elements but is unsure of the outcome. That contrasting dynamic serves her well throughout, as she cunningly crafts humble observations on love, life, family and the inextricable — and sometimes absurd — links between them.

Krause was born in Bloomington, Ind., to a musical family. Both her parents were songwriters, and her innate sensitivity and depth suggest a life of listening and learning. On the heartsick “Like That Old Willow,” guitar and voice sway like that tree’s gently weeping leaves. “Autumn Strikes” casts a steely shadow that hints at colder days to come. The old-timey and carefree “Pennies for Good” offers a breath of fresh air. “Flames Our Faces” closes the record with an exhausted yet exhilarated exhalation.

At moments, Krause’s youth is evident. Certain metaphors cloy; she sometimes relies too heartily on overt, and overused, vocal tricks when nuance would serve her writing better. But, more often than not, Eleanor Krause delivers with mature grace and charm, making Hold On Daylight a remarkable first attempt.

Krause celebrates the release of Hold On Daylight this Friday, February 10, at Radio Bean.