Elder Abuse and Neglect Is a Well-Kept Secret in Vermont 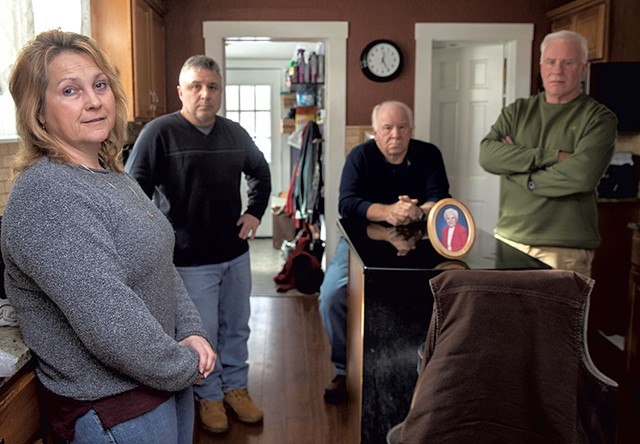 Vermont families who rely on eldercare homes often know little about their track records, despite state inspections that document problem after problem. Families make crucial care decisions in the dark.

Sherry Boudreau, a professional home-care provider, thought she was well qualified to make choices on behalf of her mother-in-law, Theresa Boudreau. The octogenarian agreed: As dementia was taking hold, she granted Sherry medical power of attorney.

Theresa, a resident of the Meadows at East Mountain in Rutland, began falling in 2015. She often tumbled from her wheelchair to the floor. In April 2018, the 87-year-old suffered a brain hemorrhage and broke facial bones in a fall that knocked her unconscious.

An inspector for the Vermont Department of Disabilities, Aging and Independent Living noted that the Meadows failed to reassess Theresa after the accident to make sure her needs were being met and to determine whether it was time for nursing home-level care. The inspector cited the facility for the lapse.

Theresa fell again in late November 2018. This time, she broke her neck and died.

A couple of months ago, this reporter reached out to the family to inquire about Theresa's final months at the Meadows. Sherry was shocked to learn that the Meadows had failed to assess whether Theresa needed nursing home-level care after her serious fall in April 2018. And she was upset that state inspectors had cited the home for that failing — but never told her.

Sherry also didn't know that the Meadows had received dozens of citations in previous years. She wishes she'd had that information.

DAIL publishes its citations in inspection reports online, but the reports are uploaded in no particular order on a hard-to-find page.

Seven Days and Vermont Public Radio also found that one in five of the inspection reports was missing from the state's website.

And although the state's eldercare homes must post their most recent inspection reports inside their facilities, the documents can be overlooked and hard to interpret. They also do not make note of previous citations.

Until he stepped down earlier this year, Clayton Clark oversaw residential care inspections and abuse investigations as director of licensing and protection at DAIL. When DAIL's website was updated just a few years ago, he said, he had expected it to include a user-friendly interface.

"It's not like that," he said, "So that was certainly a disappointment."

VPR and Seven Days paid the state about $2,100 for five and a half years of public records documenting complaints made to DAIL about eldercare homes and the violations inspectors found. The department blacked out identifying information in complaints and redacted all allegations that investigators lacked evidence to substantiate.

The news organizations used the documents to build a database and, as part of this series, launched the Vermont Eldercare Navigator. It enables the public to look up Vermont's eldercare homes by name and review their performance.

Vermont Eldercare Navigator 2014-2020
Search our directory of Vermont residential care homes and assisted living residences for citations and complaints reported between 2014 and 2020.
By Andrea Suozzo
Eldercare

If the feds were to apply the same criterion to homes regulated by Vermont, 14 of them would be similarly flagged, according to data analyzed by VPR and Seven Days. Among them: the home where Theresa Boudreau was fatally injured, the Meadows.

The job of investigating abuse, neglect or exploitation of seniors in any setting falls to the Adult Protective Services office within DAIL. It can put perpetrators on a confidential registry — or fine them up to $10,000, a penalty it hasn't used in more than 10 years. It's impossible to know whether Theresa's case was referred to Adult Protective Services, however, or what the outcome was. Everything the office investigates is confidential.

Potential employers are supposed to check to make sure people who seek to work with vulnerable adults aren't on the confidential registry. Not all do.

The Boudreau family thinks the whole system could use more transparency, starting with the records on residential care homes.

"I felt like I, at the time, was asking all the right questions," Sherry said. Those inspection reports may have held some of the answers.

The state inspectors who cited the facility never contacted her. She said, “I don’t understand why they wouldn’t do that."

Looking for info about a specific home?

Look it up on the Vermont Eldercare Navigator.

Tell us what's happening at your eldercare home at eldercare@sevendaysvt.com

Have a complaint about an eldercare home?

In an emergency, call 911. You can also reach Adult Protective Services at aps@vermont.gov or by calling 1-800-564-1612 or by visiting dail.vermont.gov.