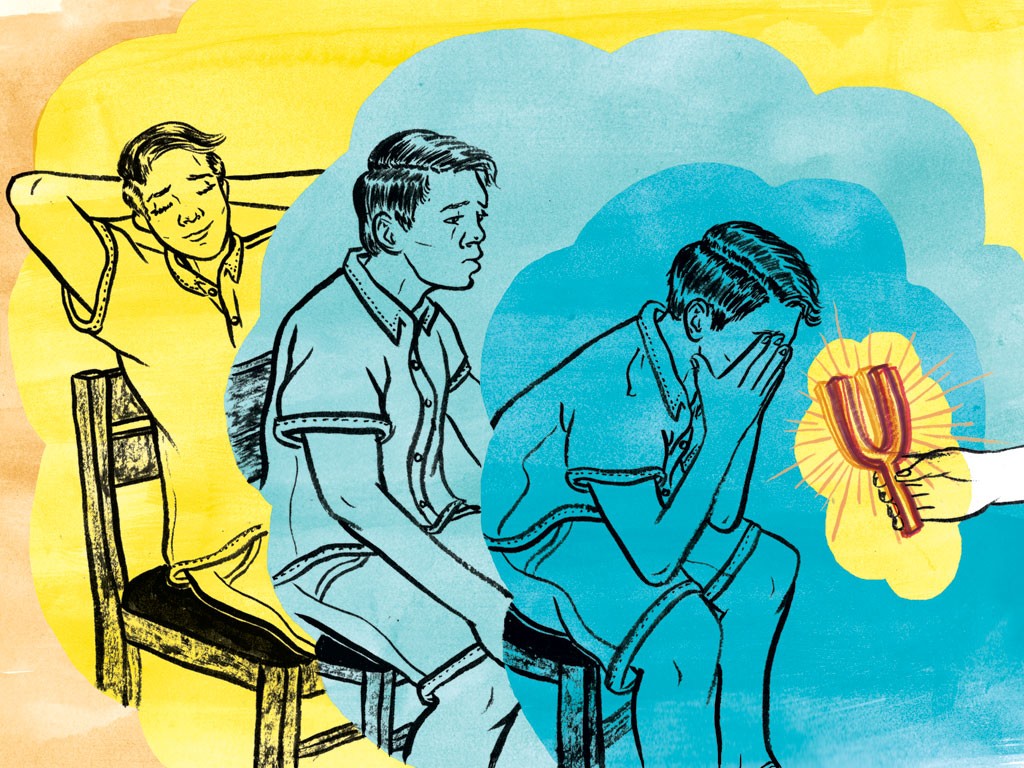 A couple of years ago, Eileen Day McKusick asked her son's teenage friend to say the first word that came to mind when she said "energy medicine." His reply: "taboo."

"That is a pretty standard response from the mainstream perspective," says McKusick, a sound therapist, researcher and wellness educator at Johnson State College. By now she's used to skeptics pooh-poohing her work. After all, when she explains that her therapy practice involves using tuning forks to retune clients' biomagnetic energy fields, or "biofields," from dissonance to harmony, it's not uncommon for people to roll their eyes and look for her tinfoil hat.

But that's OK by her. McKusick readily admits she doesn't understand the science behind what she does or know for certain that it's real — yet. She can say, however, that as a healing practitioner who's been studying the effects of audible sound on the human body since 1996, she's seen compelling results among her clients, including relief from pain, insomnia, migraines, digestive problems and other chronic disorders. And now she's written a book on her work, Tuning the Human Biofield: Healing with Vibrational Sound Therapy, which is due out on September 8.

Recently, McKusick has begun applying the scientific method to a field often dismissed by "legitimate" researchers as feel-good hokum, if not quackery. Ultimately, she says, her goal is to measure and document her results in objective terms, so that she and others can better understand and replicate them.

"I'm a nuts-and-bolts kind of person. What makes sense, what's efficient, what's grounded, what's logical — that's the way I work," she says. "For people to perceive me as some woo-woo new-age healer, I do not want to be that."

Anyone who's ever played a musical instrument, chanted "om" while meditating or lost him- or herself in a concerto, rave or rock show can understand the inherent logic in McKusick's theories. All life operates as a complex symphony of cycles, rhythms and frequencies, from the seasonal rotation of the Earth to the 24-hour circadian rhythm to mammalian menses that sync to the moon's 29.5-day cycle.

Indeed, the concept of harmonious alignment has resonated throughout human history. The ancient theory of harmony of the spheres posited that celestial bodies produce tones or reverberations that can be sensed throughout the universe. Many cultures' philosophies and spiritual traditions have identified energy flows that can move in and out of sync, affecting a person's physical and mental state.

Likewise, scientists who study everything from the minutely small (quantum mechanics) to the immensely large (astrophysics) search inexorably for cycles, rhythms and patterns that tie everything together. And why not? As far back as 1666, Christiaan Huygens, the Dutch physicist who invented the pendulum clock, observed that two such clocks mounted on the same board will eventually synchronize their oscillations. He labeled this phenomenon "odd sympathy," but today it's more commonly known as entrainment.

If two inanimate moving objects will entrain to the same frequency, McKusick posits, and so much of human physiology — heartbeats, brainwaves, electromagnetic currents coursing through our skin, nerves and tissues — operates in ranges that are either normal or arrhythmic, then can those frequencies be recalibrated or retuned, like a violin string?

"If everything is vibration," she says, "then treating vibration with vibration seemed really logical."

McKusick, 45, hasn't always worked on the outer fringes of the establishment; she comes from a business background. After graduating from high school in northeastern Connecticut, McKusick decided that, rather than attending college, she'd backpack through Europe. Upon her return home, she and her brothers founded the Vanilla Bean Café in Pomfret, Conn. It opened with 16 seats in 1989, when she was 20. Within four years, Vanilla Bean had 140 seats and 32 employees.

"It was insane, and I was insanely busy," recalls McKusick, who was putting in 100-hour weeks. Ultimately, she devoted 13 years to the café, but realized the stress was destroying her health. So, in 1996, she launched a massage-therapy practice and began exploring alternative healing techniques, especially the use of music, sound and vibrations. In 2002, McKusick and her husband moved to Vermont.

After poring over countless books and films on sound therapy and pop quantum physics (e.g., What the Bleep Do We Know!?), McKusick saw an ad for tuning forks used in sound healing. She ordered a set, in the C major scale, and began experimenting with them on her massage clients, alternately touching the fork to their bodies and holding it at a distance of six feet or more from them.

"I thought it would produce an objective tone no matter where I held it over the body, but it didn't. It sounded different in different places," she says. In some spots the fork grew louder, in others quieter, and in still others it encountered "static." When the tones changed, McKusick says, it was as though the body were emitting waves that interfered with the tuning fork's frequency. That intersection, she theorized, contained information: memories of past trauma, she suggests, which radiate outward like rings on a tree. So she focused on that spot until the static diminished.

McKusick spent about 10 years experimenting with her tuning-fork therapy, strictly as a hobby and never presenting herself as an expert or specialist. But when clients began experiencing results she could neither understand nor explain, she started asking a fundamental question: What would science call this?

"When I move the tuning fork in toward the body and hit this distortion, and it feels like a resistance or charge, it feels like there's something there," she says. "What is it? Is it electrons? Is it magnetic monopoles? What the heck is it?"

McKusick tried asking physicists and professors in other scientific disciplines for explanations, but there she encountered a different form of resistance. When she used words such as qi or prana, which translate as "energy flow" or "life force," the scientists instantly dismissed the discussion.

Unable to find anyone else to engage in her scientific pursuit, McKusick undertook it herself. First, she got her undergraduate degree from Johnson State — in one year. Next she spent another three years earning a master's degree in education. Her thesis, "Exploring the effects of audible sound on the human body and the biofield," won her an academic excellence award — and became the basis for her soon-to-be-released book. She's currently working on her doctorate at the California Institute for Human Science.

McKusick's clients aren't just new agers and hippies, as skeptics might assume. George Russell of Burlington is a 61-year-old executive who retired seven years ago from a large multinational corporation. About 18 months ago, he met McKusick while flying out of Burlington and was intrigued by her approach to healing. Initially, Russell went to see her to address pain and stiffness in his shoulder and hip. Though he wasn't a disbeliever per se, he admits he wasn't certain she'd produce any results. But after just two sessions, Russell was convinced that McKusick's methods were, in a word, sound.

"Her ability to diagnose physical issues that have emotional roots has helped me to understand and deal with some long-standing issues," Russell writes in an email. "After our first series of sessions, then over six months, she helped me to understand some deeper physical issues that have emotional origins — then to use the sound therapy to mitigate those issues."

Today, Russell reports that he is physically healthier and has reduced tension and pain. Mentally, he adds, "I'm more centered and confident."

"The whole intention of all sound healing is to take you out of a place of agitation or discomfort and into a place of relaxed, aware presence," McKusick explains. "It's all about being here now and settling the noise and static out of the system."

Recently, McKusick was hired by someone living near the wind turbines on Lowell Mountain in the Northeast Kingdom, who attributed various ailments to the turbines' whir. While McKusick theorizes that some people's biofields might indeed entrain to the turbines' spin, she says she made it clear to industrial wind opponents that "What I'm doing is not science yet. It's invalid for your cause. Until I can quantify this data, I can't be a part of this [debate]."

That may change, as McKusick is endeavoring to quantify her results. Recently, she was granted access to a medical thermal-imaging device to study a client with congested sinuses both before and after receiving a 10-minute sound-balancing treatment. The "before" image showed significant areas of blockage, which appeared in blue. The blue areas were notably diminished in the "after" image.

"She was clear and able to breathe. And it stayed gone," McKusick says.

Despite such initial results, McKusick remains open to the possibility that the scientific method could eventually prove her theories invalid. Because the human brain is a pattern-recognition machine, she says, "It could all be a construct of my own mind ... It might not have any objective existence. But I really want to know whether it does or not, because both answers have wild implications."

The original print version of this article was headlined "Good Vibrations"

Correction 07/30/14: An earlier version of this article misstated the distance McKusick stands from her patients.