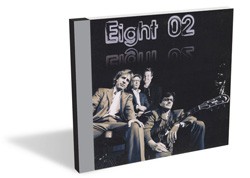 “As We Speak” kicks off the record with a bustling intro courtesy of Adler and guest percussionist Lenny Castro. As the band locks into an undulating groove, Peterman and Monachino commandeer the tune’s sprightly, melodic main theme. The guitar-sax pairing is clean and balanced, almost to a fault. At times throughout the record, the general feel and atmosphere is Weather Channel smooth. Thankfully, Monachino obliges with a rapidly closing storm front in the form of jaw-dropping lightning strikes on guitar. His lines are fluid, fast and technically immaculate. Engisch follows with some impressive, and progressive, keyboard work before the tune resolves around the initial melody.

“Elena” follows and continues the album’s generally upbeat, energetic mood before settling in to a lightly simmering 6/8 swing, which allows Peterman and Monachino space to amble. Both players take a tacit approach, baiting the listener with pretty, spare lines before stretching out. Engisch lays down a sparkling solo section before Peterman returns with a fluttering counter and takes the lead to the outro.

Of the EP’s five tracks, “All This Talk” is perhaps the most egregious example of smooth-jazz wanking. Over a funk-lite groove, the band indulges all manner of contemporary jazz clichés, from Cheez-Whiz synth to self-gratifying solos. Though a showcase of each player’s technical prowess, this does little to serve — or rescue — the larger piece. There’s no edge or daring here, which was sort of the point of the post-bop era.

In contrast, the following cut, “In the Mind of a Wounded Swan,” offers a far riskier arrangement — despite the tepidly overdriven guitar and synth. Sharing more in common with jam-oriented rock than jazz — contemporary, post-bop or otherwise — the track is a surprisingly psychedelic trip that finds the band working in perfect concert.