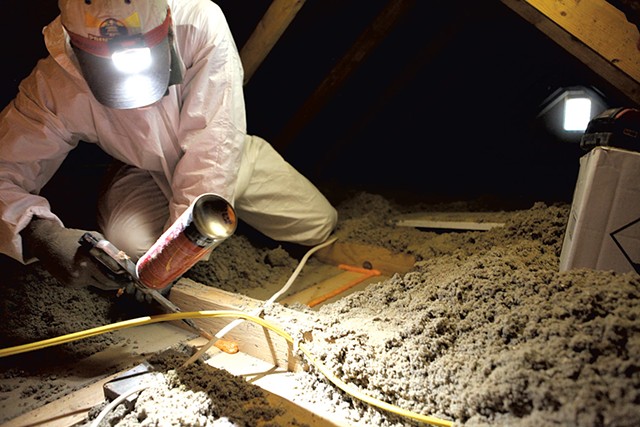 When contractors for Efficiency Vermont suggest ways in which homeowners can reduce their energy use, they are focused on lowering electric bills.

They outline cash incentives to replace incandescent lights with LEDs. They offer rebates to encourage households to buy more energy-efficient refrigerators, washers, dryers and space heaters. And they turn people on to gadgets such as advanced power strips, which ensure that computers, TVs and other electronic devices stop drawing electricity when they're turned off.

But the contractors don't have ways to encourage people to buy electric cars or cold-climate heat pumps — purchases that could save them money and reduce their use of fossil fuels, albeit while increasing their electric usage.

"When [energy auditors] are on a site looking at electric efficiency, they're not permitted to make suggestions in the thermal or transportation space," said Sen. Chris Pearson (P/D-Chittenden), who sits on the legislature's Joint Energy Committee. "[It's] not really wise, given where we're at with our climate goals."

That limitation may be about to change.

Vermont is taking a hard look at broadening the mission of Efficiency Vermont to include helping residents reduce their use of fossil fuels to heat their homes and businesses — and to drive their cars.

Efficiency Vermont was founded nearly 20 years ago to reduce Vermonters' use of electric power. The state-created utility is funded primarily by a charge on all electric bills and is administered by the private nonprofit Vermont Energy Investment Corporation.

This year, the state legislature instructed the Public Utility Commission to investigate creation of an "all-fuels efficiency utility." The PUC started its work in July and will hold its first public meeting on September 26 — a workshop to identify existing energy programs and funding sources. The commission has until January 15 to deliver a preliminary report to lawmakers.

Though the policy discussion promises to be a profoundly wonky affair, state leaders have high hopes that the final product will help the state get back on track toward meeting its ambitious greenhouse gas reduction targets.

The state has already missed one goal: to cut emissions 25 percent below 1990 levels by 2012. More recent shortfalls decrease the likelihood that it can meet the 2028 target of a 50 percent reduction below 1990 levels. A June 2018 report, the Vermont Greenhouse Gas Emissions Inventory Update, showed emissions ticked up 4 percent in 2014 and another 6 percent in 2015, the last year for which figures are available.

A broader mission for Efficiency Vermont makes sense, supporters say, because electricity use is not the state's most significant source of carbon emissions. Transportation, in the form of gasoline-fueled passenger cars and trucks, produces 45 percent of the state's emissions. Heating homes, schools and businesses, mostly with natural gas, heating oil and wood, accounts for another 22 percent.

"We've made great progress on electrical efficiency," said Sen. Chris Bray (D-Addison), chair of the Natural Resources and Energy Committee. "We have not made comparable progress on transportation and thermal efficiency."

Rebecca Foster, director of Efficiency Vermont, supports a broader mission for her organization. She is proud of her utility's success in reducing the state's electricity usage, which she said has significant financial, environmental and economic development benefits.

The more than $600 million in surcharges Vermonters have paid on their electric bills since 2000 has delivered $2.4 billion in long-term savings, she said. Vermont has curbed the growth of electric use, and an estimated 63 percent of its electricity comes from hydropower, a renewable source with very low carbon emissions.

"There is a climate crisis. It's getting more and more urgent. And right now all state policies and programs are not aligned toward that goal," she said.

For example, since 2017, retail utilities such as Green Mountain Power  have been required to increase the percentage of renewable energy in their portfolios. That same obligation, referred to as the renewable energy standard, requires that utilities reduce their customers' fossil fuel use through new "energy transformation projects." So Green Mountain, BED and others have offered generous incentives to get people out of the gasoline vehicles and into electric cars with fast-charging units in their garages.

In other words: While Efficiency Vermont has worked to reduce electric use, electric utilities have sought to increase electricity use to reduce fossil fuel emissions.

"That doesn't make sense to me," Foster said. 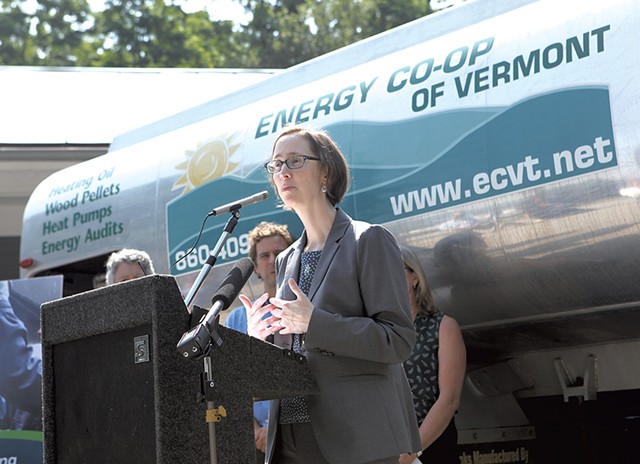 Nor does it make sense to Ben Edgerly Walsh, the climate and energy program director at Vermont Public Interest Research Group.

"There are investments right now that we need to be prioritizing that actually increase electricity use in a strategic way, and that is kind of contrary to the model that we are operating on," Edgerly Walsh said.

While more efficient fridges and LED light bulbs pay for themselves in short order through lower power bills, electric cars and heat pumps are more efficient and will save money but "don't pencil out from a strict electric energy savings standpoint," he said.

They may pencil out in the bigger picture, however.

"What matters to Vermonters is how much they are spending on energy as a whole," Edgerly Walsh said. "If you can reduce their fossil fuel bill by far more than they are increasing their electric bill, they are saving money — I think that is a proposition that Vermonters are going to embrace."

The people who make their living selling fossil fuels will likely have something to say about that.

"You are basically asking an efficiency utility designed to reduce electricity usage to encourage it," said Matt Cota, executive director of the Vermont Fuel Dealers Association.

Liquid fuels — heating oil, diesel, jet fuel, propane, gasoline — are vital in this cold, rural state, Cota said. There are situations in which electricity is not an option, including when the power goes out.

"The rush to electrify everything in Vermont runs into reality — that we still need the combustion engine for our roads and a gas- or oil-fired burner to keep our homes warm," Cota said.

He argues that modern improvements to oil-burning technologies have already cut home heating fuel use by 40 percent and that they, combined with cleaner fuels like biodiesel, need to be part of the mix to help the state achieve its emission-reduction targets.

"You can't get there using electricity alone," he said.

The PUC's upcoming study won't be the first time the state has considered tackling the efficiency of fossil fuels. In 2007, a similar analysis estimated that efficiency improvements for nonregulated fuels such as heating oil, kerosene and wood could save the state $486 million over the next decade.

It found that by far the biggest potential savings — 72 percent — lay in the fuel oil sector, followed by propane (16 percent), wood (8 percent) and kerosene (4 percent).

The report estimated the cost of implementing a program to achieve those reductions at $150 million over the decade, but the program was never implemented, State Auditor Doug Hoffer said.

Efficiency Vermont has nevertheless found ways to operate in the thermal efficiency realm, just not as much as its leaders would like. About 80 percent of the organization's $60 million annual budget comes from electric charges, but the remaining 20 percent taps other sources that allow the utility to offer thermal incentives, such as efficient woodstoves and home weatherization.

On Tuesday, employees of Energy Co-op of Vermont, an Efficiency Vermont-approved contractor, crawled through a dark, dusty attic in a home in Colchester, sealing cracks with orange foam insulation.

The legislature this year directed additional money toward incentives for such work, but if Efficiency Vermont's mission expands, those budgets could grow further.

Hoffer said that, over the years, he has received complaints about Efficiency Vermont from residents who resent the average $8 monthly charge on their electric bills.

"There are [some] who just think it's a bunch of overeducated liberals working in a fancy office," Hoffer said.

Reviews of Efficiency Vermont's work by an independent auditor, however, have shown it to be delivering on its promised savings, he said.

Because of their different missions, Efficiency Vermont and the electric utilities have not always had consistent messages about particular efficiency measures, which can be confusing to consumers, Foster said. While they've improved their coordination efforts, a more cohesive strategy is needed.

"There is a lot of work to do, and we just don't have the time or money to continue to work at cross-purposes," she said.

Correction, August 26, 2019: The Burlington Electric Department has not been required to increase the percentage of renewable energy in its portfolio. A previous version of this story contained an error.

The original print version of this article was headlined "Power Play? | Efficiency Vermont's mission could expand — to fossil fuels"