EDM Star and VT Expat Morgan Page Will Rock You … in 3-D! 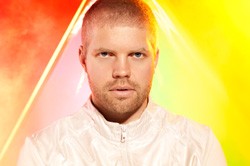 On the surface, the names Morgan Page and Michael Jackson wouldn’t seem to belong in the same sentence. And yet Page, a native Vermonter and two-time Grammy-nominated DJ and producer, and the late King of Pop do share at least one thing in common: an interest in unusual concert technologies.

For the electronic dance-music star’s latest tour, dubbed “Morgan Page Presents: An MPP3D Concert Experience,” Page incorporates a 3-D interactive technology originally created for Jackson’s “This Is It” tour in 2009. At the Higher Ground Ballroom this Friday, October 17, Page will unveil a spectacular combination of music and visual effects designed to envelop performer and 3-D-glasses-clad fans alike in a deep, multisensory experience.

“The whole idea is [to create] immersive environments,” says Page, 32, in a recent email interview with Seven Days. “It’s not like a screensaver or anything,” he continues, adding that a team of 30 animators helped create the show. “We sat down and figured out which elements pair with the music and which colors and what sort of behaviors happen.”

Page describes an experience designed to mimic that of a 3-D film.

Jackson originally developed the 3-D technology for massive arena shows. But Page says the idea works as well in comparatively smaller rooms, too, such as the Higher Ground Ballroom.

“We’ve brought the 3-D show to 10,000-person coliseums and 400-person clubs with equal effect,” he says. “You can experience the shows in different ways — socially as part of a large, raging party, or even solo as more of a cerebral thing. It’s amazing watching people react.”

Page says the experience has had an effect on him, too.

“The 3-D show illuminates the music in a whole new way and changes the entire experience. It’s even changing the way I write music,” he explains. “I would love to continue exploring the technology in ways that serve as a vehicle to express the music.”

The roots of Page’s interest in expressing larger concepts through music extend back to his high school days. While attending Champlain Valley Union High School in Hinesburg, he was already a DJ on the University of Vermont’s student radio station WRUV 90.1 FM. He says that experience laid the groundwork for later success.

“College radio was a major factor. It’s how I discovered electronic music and then my love for crate digging and the local club scene,” he says. “But there was also an early interest in just good songwriting and folk music.”

That diversity of interests has served Page well. In addition to his original music, he’s remixed songs by a wide array of artists, including Regina Spektor, Madonna, Stevie Nicks, T. Rex, Coldplay and the Police, to name a few.

A young Page left a lasting impression on those who preceded him in the local EDM scene, including Craig Mitchell, now an iconic figure in Burlington house music.

“I’m so proud of Morgan,” says Mitchell, who recalls a teenage Page bringing CDs of his music to Mitchell at the now-defunct record store Max Mix on Church Street. “I was blown away by his talent and his humility,” Mitchell continues. “Over the years, after being nominated for two Grammy Awards and worldwide success, he still retains his sameness.”

Page’s drive propelled him beyond Vermont’s borders to attend Emerson College, where his passion kept him moving further still.

“I saw a lot of my friends sort of ‘settle’ and trade their childhood dreams for the long road to the middle — hang around home, get married and make some babies,” says Page. “This path is totally fine, but I felt endlessly restless in Vermont and wanted to escape the small-town roots. I wanted to travel and learn more about electronic music around the world.”

Recognition began to come Page’s way in 2002 thanks to his debut album, Drifting Into View. But it wasn’t until 2008 when Deadmau5 remixed his single “The Longest Road,” from his album Elevate, that Page experienced widespread acclaim. That remix garnered a Grammy nomination for Best Remixed Recording, Non-Classical. In 2011, Page was again nominated in the same category, this time for his remix of “Fantasy” by Nadia Ali.

Page credits his success to his relentless passion and tireless work ethic. He advises aspiring artists to do the same.

“Pursue your dreams, don’t settle, and don’t let anyone stand in your way, because you’ll have to face many obstacles along the way,” he says. “The most important thing is to put the time in. Spend at least three hours a day pursuing your craft, and you’ll get there.”

Mitchell agrees and thinks Page, like some other famous Vermonters, can serve as an example to future generations of local musicians.

“Morgan Page … [much like] Phish and Grace Potter, should be an inspiration to creative people young and old that the future looks bright,” he says. “Get your shades ready, because the lights are coming.”

Or better yet, get your 3-D glasses.

The original print version of this article was headlined "Technovision"