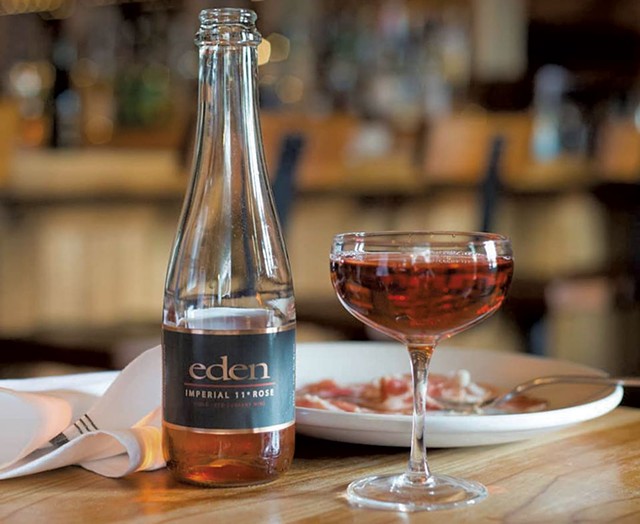 In Vermont, August marks the beginning of the apple harvest. This year, it'll bring a new apple to the Onion City, when Newport-based Eden Specialty Ciders opens the Eden Boutique Taproom & Cheese Bar at 45 Main Street. The 25-seat space is part of the storefront that once housed oak45 and its short-lived follow-up, Mister Sister. Earlier this spring, Drafts N Crafts opened on the other side of the wall.

The new bar will feature six draft lines, according to cidery owner Eleanor Léger. On offer will be Eden beverages, "guest ciders" from other cideries and one local beer. Eden's full line of traditional ciders — sparkling and still, sweet and dry — will rotate on and off the draft and bottle menu as they become available.

The food menu is anchored by cider-and-cheese pairings and cured meats, Léger said. "As opposed to 'Here's our tap list and here's some snacks,'" she added, "[the menu] gives reference points to traditional cider pairings from around the world." So a Spanish-style cider might be matched with a Manchego-style Vermont cheese or an artisan cured ham.

The bill of fare also makes the most of general manager Adam Goddu's background, which includes working as the retail director of dominant New York City fromagerie Murray's Cheese. Goddu moved to Vermont for the position at Eden, Léger said.

Everything at the bar — wines, cheeses, crackers and other fixings — will also be for sale in the Boutique's cheese-counter retail shop.

Eden Specialty Ciders is coming out of a busy spring. Its new tasting bar, the Centennial Taproom, opened in late June at Newport's Northeast Kingdom Tasting Center, where the company is headquartered. The bar is a temporary establishment replacing the Newport Ciderhouse Bar & Grill, which closed earlier this year, until a more permanent tenant can be found.

The cidery has more plans for the summer, too; later this month, it will open a pop-up "tasting shack," with flights and full-size pours, at the Pete's Greens Farm Market in Waterbury.