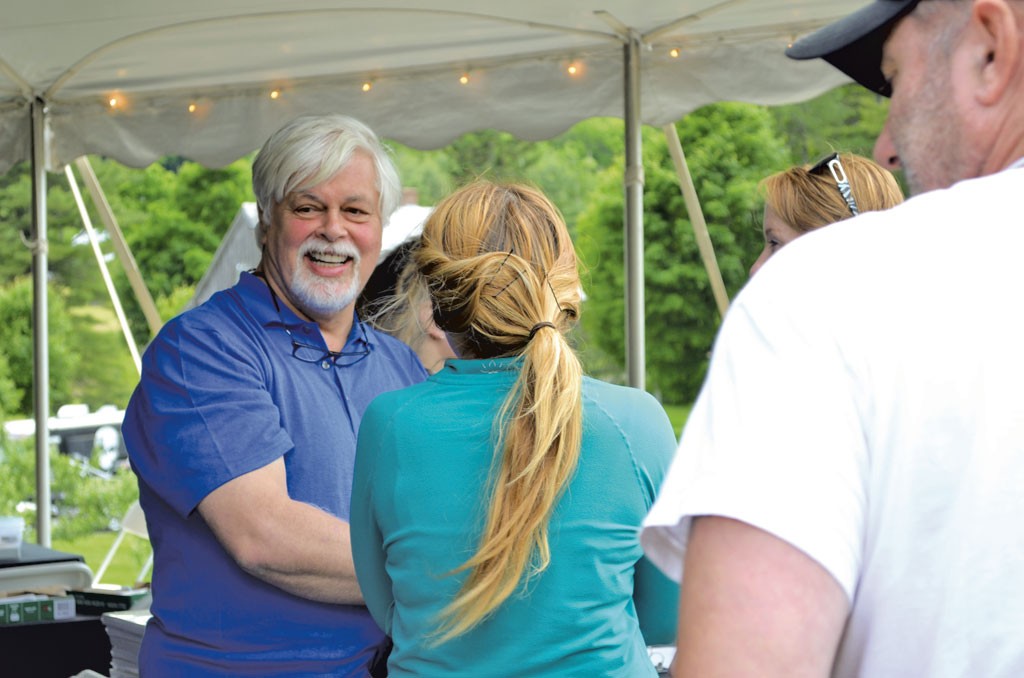 Last Saturday, more than 100 people — nearly all of them wearing black — sat in the shade of a tent on a sun-drenched estate in South Woodstock watching video footage of de-finned shark carcasses. Parked in front of a nearby barn was an RV emblazoned with a giant Jolly Roger.

The Sea Shepherds, whose brazen tactics were captured on the Animal Planet reality show "Whale Wars," are best known for using "direct action" to thwart Japanese whaling ships in the Antarctic Ocean. Direct action, in this case, refers to everything from ramming whaling ships to throwing stink bombs on board.

There was a lot of hugging on the first morning of the three-day summit. Some attendees had spent months together at sea in but hadn't seen one other in years. They had come from Texas and Virginia and places farther flung — Canada, South Africa, Brazil, Hong Kong, the United Kingdom, Sweden and the Netherlands. 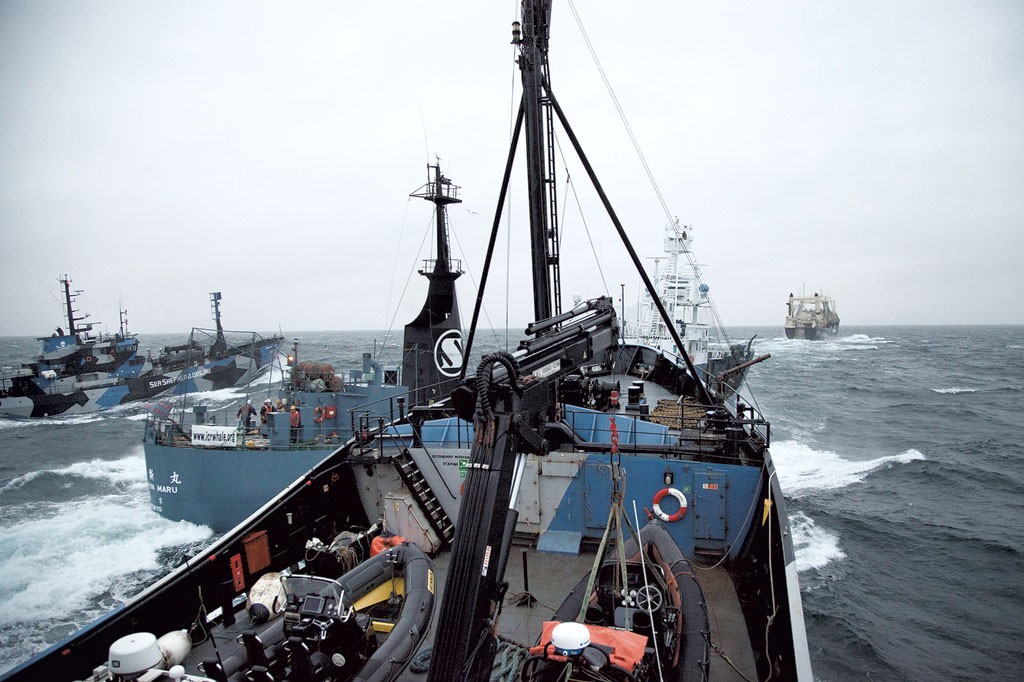 Sea Shepherds' critics — including one U.S. federal judge — have described them as "pirates," and some tanned, tattooed men visually fit the bill. But they mingled with a mother from Seattle, a blond flight attendant from Australia, twins in oversize sunglasses, leggings and red lipstick, elderly men, and other ordinary-looking people.

Conversation was less ordinary: "He taught me to stargaze during the 1983 seal campaign!" a woman in her sixties said, pointing to Al "Jet" Johnson, a retired American Airlines pilot who looks the part — blue tinted aviators, periwinkle cardigan slung over his shoulder, black polo, creased khakis.

Also overheard: "When I was in Malaysia last week doing coral propagation..."

Away from the socializing, a portly, white-haired man in a blue shirt sat watching his granddaughter play with a plate of cheerios: Paul Watson — cult hero and celebrity darling — is one of the most notorious environmental activists in the world. The 63-year-old landed on INTERPOL's Red Notice list after Japan and Costa Rica accused him of damaging property and breaking into a vessel.

Watson started the Sea Shepherds in the '70s, after Greenpeace expelled him for being too radical. He said he likes to think of his group as "the ladies of the night of the conservation movement" because "people agree with us, but they don't want to be seen with us." The group's identity remains very much entwined with its "eco-warrior"-in-chief, and members gathered here last weekend because Watson lives in Vermont now.

He's been land-bound since December 2012, when Japan succeeded in bringing an injunction against him and Sea Shepherd USA, preventing both the man and the organization from approaching within 500 feet of their ships. Fifteen months later, the International Court of Justice deemed Japan's whaling trips illegal, but Watson said he still had to cede his spot at the organization's helm out of legal necessity.

In response, the group has been cultivating international offshoots. It's already active in 40 countries, according to Watson, and Sea Shepherd Australia has become its largest operation. Each affiliate is legally distinct by design — so one lawsuit can't bring down the whole organization — and the summit was intended to share information and strengthen ties between them. A cluster of tents, where most members were camping, occupied a nearby hillside.

The overarching message of the weekend: Sea Shepherd is a movement, not a man or an organization. And that "movement" has an operating budget of roughly $12 million, Watson said in an interview. It also has 2,000 applications from people who want to crew the five Sea Shepherd ships. Total membership? "I have no idea," Watson said. Other staffers couldn't provide specific numbers, either.

Members spent most of Saturday under the white tent, getting briefed on current Sea Shepherd campaigns: documenting dolphin slaughter in Japan; opposing shark finning in China; working with the Senegalese government to stop fish poachers.

"I can wake up in the morning and hear about a Sea Shepherd campaign I didn't even know about," Watson told the crowd.

Roger Payne, the biologist who discovered that humpback whales sing, was there. He's a longtime whale conservationist and adviser to the Sea Shepherds.

Johnson, who's been a Sea Shepherd since the start — he left Greenpeace when Watson was ousted — made the trek from Vancouver. In his younger days, he said, he paint-bombed a Soviet ship, flew recon for seal campaigns and dropped parachutists onto a nuclear power plant. Asked for further detail, he responded, "Oh, you can google the rest of it." These days, he's on standby — "Time to step aside for the younger people."

Younger people such as Peter Hammarstedt of Sweden. He joined the Sea Shepherds as a deckhand when he was 18, worked his way up to be Watson's first mate and then, three years ago, became captain. Now 29, he's been on all nine of Sea Shepherds' Antarctic campaigns against Japanese whalers.

With his boyish face, glasses and sparse facial hair, Hammarstedt looks more like a software engineer than a captain, but he's proven his skills at sea. During a recent Antarctic campaign, he steered his ship in between a whaling vessel and a tanker, preventing the former from refueling. Dramatic footage shows the Sea Shepherd ship, Bob Barker, colliding repeatedly with the two much larger vessels.

Not all the presentations were as harrowing as Hammarstedt's. Gary Stokes of Hong Kong, who's leading the campaign against shark hunting in China, spoke about his efforts to persuade companies such as Groupon to stop advertising shark-cartilage supplements. "It's not zipping around in a Zodiac," Stokes admitted, referencing the activist organization's boat brand of choice.

Kristen Hall joined the group four months ago as an "on-shore volunteer" in Minneapolis. At her day job, she works in marketing for Ameriprise Financial. Wearing a necklace with a sterling turtle pendant, she admits watching "Whale Wars" makes her anxious.

"We evolve in accordance with the imagination of the volunteers," Watson said during an interview. Today, the Sea Shepherds are partnering with the songwriter and producer Pharrell Williams in what Watson described as "our most ambitious campaign right now." The Sea Shepherds' task is to figure out how to extract plastics from the oceans; Williams' role is to make clothing from it.

The group's whale rescues have always overshadowed the rest of its work, Watson said, but they also help bankroll less compelling campaigns. "We just rescued sea urchins off the coast of Sicily. No one wants to talk about that."

Watson speaks in seamless run-on sentences, blending apocalyptic statements — "The oceans are dying, and if the oceans die, we die" — with political commentary. "Tony Abbott makes George Bush look like a raving intellectual," he said, taking a swipe at Australia's prime minister.

While sidelined, Watson is writing his seventh and eighth books, one of which describes a Confederate campaign to sink Union whaling vessels that had the inadvertent effect of saving three species of whale from extinction, according to the author. "My role model is James Wadell, the captain of the Shenandoah. He sank 37 whaling ships, didn't hurt anybody."

The only water in sight on Saturday was a pond, and swimming wasn't permitted — "The ponds belong to the frogs, and they don't like your sunscreen," Watson told the group. Pritam Singh and Ann Johnston, longtime Sea Shepherd supporters, offered up their land for the event. The owners of a real estate development company in the Florida Keys, the couple met Watson more than two decades ago when he was in the Keys looking for a place to put his ship. Singh and Johnston let him tie up at their dock.

Planned activities throughout the weekend included: a drone demonstration — Shepherds use them for recon and to take photos — meditation time, a talk on veganism and a "Media 101" session. Between the reality TV show and the 2007 New Yorker profile of Watson, it seems the Shepherds are getting plenty of publicity.

On that subject, Watson overruled his own media director, who asked Seven Days not to reveal where he's living: South Woodstock. "She's paranoid," said Watson, waving off her concern. "I'm not wanted for anything in this country."