Eating Well on a Daytrip to Sutton, Québec

Sometimes people cross borders for freedom. Sometimes they cross them for food. My friend Simone, who now lives in Vermont, was a baby when her parents immigrated to British Columbia in the 1980s as political dissidents. A dual citizen, Simone recently agreed to accompany me on an international excursion with much lower stakes: a food-centered daytrip to Sutton, a bustling small town near the border in Québec's Eastern Townships.

Perhaps I'm just neighborly, but going abroad tends to make me appreciate both my native country and the one I'm exploring — bonus when it's less than an hour's drive from my home. Yet the relaxation of border restrictions since the early pandemic hasn't resulted in an influx of tourists heading north. While the number of Americans driving into Canada has increased tenfold from 2021, according to Statistics Canada, it's only reached about half the level of 2019, according to Reuters — and that includes daytrips.

Adèle Prud'homme, who co-owns the new restaurant and wine shop Réserve Naturelle Caviste in Sutton, said most of her customers are from Québec, though she's seen a few folks from across the border. She said neighboring shop owners agree that this year's sales numbers are on the low end, compared with pre-pandemic figures.

"It's still a lot of people, but these have been years that habits have changed a lot," she said.

Walking through Sutton's lively Saturday market on a hot August morning, I noticed how my own habits have changed: I go out less frequently and buy less. For other Americans feeling that financial vigilance, an upside of visiting Canada is that our dollar is strong, with the Canadian dollar at about 80 American cents.

Food vendors, furniture makers, booksellers and artisans made our visit to the Sutton market memorable. I bought locally harvested sweetgrass that had been braided into a doll shape, and fleur de sel with crushed calendula. I wished I'd brought a cooler to take home a few handfuls of chanterelles. (See below)

We walked from the market to Sutton's happening main drag, where no businesses appeared to be vacant, and found a table for lunch at Mollies. The dog-friendly, shaded terrace was busy, and service was quick. On Thursday evenings, Mollies offers barbecue and hosts a jazz musician as part of Sutton Jazz, which holds free concerts into September.

Iced nettle and lemon balm tea helped us keep the heat in check. My lightly smoked mackerel rillettes came with a sesame bagel and a pickle spear, making for an enjoyable lunch, if an unexceptionally presented one. More impressive was Simone's chilled cucumber soup, puréed with yogurt and topped with cherry tomatoes and chopped basil.

Feeling an openness and heightened curiosity in this new environment, we continued to explore the town's offerings. At farfelu, an artists' cooperative and gallery, I bought pretty hand-poured concrete coasters and a candleholder for a song. The artist working the counter said the gallery's name means "harebrained" and encouraged Simone to take home a complimentary branded matchbook "for your daughter." It seemed like a strange suggestion for a child until we realized that the inside of the matchbook contained not matches but tiny slips of paper for drawing or taking notes. 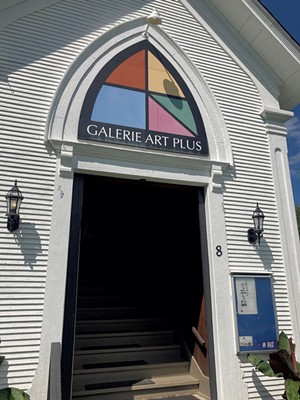 Next, we popped into an art opening at Galerie Art Plus, housed in a converted church. We drove a couple of miles to Parc d'environnement naturel de Sutton, where we hiked to a small waterfall and lounged in the shaded waters, grateful for the right and means to travel and experience this respite from the quotidian.

We left the park in time to check out La Rumeur Affamée, a well-established gourmet market in downtown Sutton that was full of culinary delights: fir-infused honey; baked goods; fish from Québec; high-quality, frozen meals made in-house; local wines and ciders; and artisanal pies and quiches, some of which were made with lard. Many of the prices seemed comparable to or lower than those of similar-quality items in Vermont, even before the conversion rate.

The charcuterie selection was formidable, with numerous varieties of saucisson sec, foie gras, mousse and pâté, many from Québec and some imported. I picked up some thinly sliced coppa and lonza from organic producer Les Viandes Bio de Charlevoix, along with a slab of rabbit terrine with blueberries from another Québec producer.

Music from a deck-side public piano enlivened the streets as we walked to dinner at Réserve Naturelle Caviste, a wine shop combined with a counter-service restaurant. Its spacious interior is filled with organic, biodynamic, and low-intervention wines and ciders, some local and some imported. Those include cider that the co-owners of the shop, Prud'homme and her boyfriend, Lionel Furonnet, make from wild and organic apples in the Eastern Townships under the name Turbulence.

Prud'homme, who opened Réserve Naturelle Caviste with Furonnet last fall, explained that their hybrid business model is only newly possible. Wine shop licenses don't exist in Québec, and most bottles are sold in government-run stores. To sell imported wine, one must have a restaurant license and serve the wine with food, even when bottles are offered to go. (A small range of mass-produced imported wines are sold in some grocery stores.)

A change to the law during the pandemic made it legal for restaurants to sell a bottle with a small food item rather than a whole meal. Hence Réserve Naturelle Caviste's offerings of small plates and crackers, jams and nuts to go.

The dried sausage with black garlic came with a jar of lightly pickled local veggies and grilled focaccia. tweet this

I tried a sip of a lovely, minerally white from Maison Agricole Joy Hill, a winery in nearby Frelighsburg. Prud'homme said it was made from grüner veltliner and Riesling; the former varietal is almost never grown commercially in this part of North America.

The Domaine Le Grand Saint-Charles Farniente, a playful, sparkling ruby-red co-fermentation of Frontenac gris and Frontenac noir grapes that calls itself a rosé, was available only by the bottle. Unable to resist, I ordered it hoping the border agent would let me bring back whatever we didn't drink.

Everything about our meal was eye-pleasing, unfussy and delicious. The dried sausage with black garlic came with a jar of lightly pickled local veggies and grilled focaccia. Punchy sour cherry jam, seasoned walnuts and crostini accompanied a wedge of Manchego.

I relished the generous bowl of tender, herbed meatballs made from a mix of veal, beef, pork and Parmesan, served with a zippy tomato sauce and basil. Thinly sliced smoked salmon arrived on a creamy pillow of puréed corn, mingled with pickled beets, slivered breakfast radishes, and fresh corn kernels and basil — a plate of summer perfection.

We left the restaurant buoyant, already scheming up returns to the townships in which we'd remember to bring a cooler. Suddenly, as we crossed the street, the cork burst from my bottle and a pink explosion of wine sprayed my white canvas bag and the asphalt, startling passersby.

Ten minutes later, we were back in Vermont, the remainder of the wine and assorted goodies secured in the trunk for future savoring. 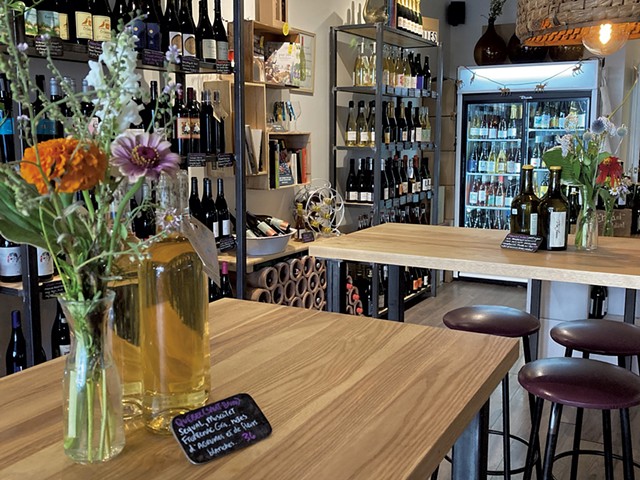 Most food, drink and consumer goods from Canada can be brought into the United States. In general, if a food item is processed, packaged or baked, it's allowed. Most animal products are also permissible, with the exception of lamb and goat meat.

Most produce grown in Canada between May and October can also cross the border, but produce that doesn't normally grow in Canada — bananas, oranges, pineapples — is permissible only when frozen, dried or canned. Agents could request proof that fresh produce was grown in Canada, such as produce stickers, packaging or receipts showing the farm they came from.

The "aboveground parts" of fresh mushrooms are allowed, as long as they are clean. What U.S. Customs and Border Protection aims to keep out is any lingering soil on produce that might spread pests or disease. Rules about produce change, especially with pest and disease outbreaks, so check the U.S. Department of Agriculture website for the latest.

If you bring a proscribed food item and declare it, you will not face a charge or a fine, although the agent will confiscate the item and could submit the passengers to a search. When passengers' responses to agents' questions diverge (e.g., "No food to declare" from the driver followed by "No, we have apples" from a child), agents typically search the vehicle.

There are no federal restrictions on how much wine you can bring into the U.S. for personal use, although a large amount could subject a traveler to scrutiny. Vermont law allows people to import up to eight quarts of liquor or fortified wine and six gallons of wine or malt beverages.

Travelers could be asked to pay a small duty if they bring back more than one liter of alcohol. Duty on wine and beer for personal consumption (when imposed) is $1 to $2 per liter, while liquor is subject to higher rates.

It is against Canadian law to transport any cannabis products, including CBD, into or out of Canada.