Eating on the Edge

At a local food shelf, demand is up 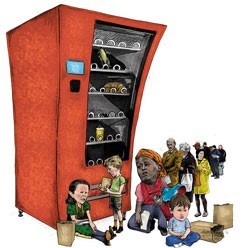 A visitor could mistake the inside of 228 North Winooski Avenue for a small grocery, albeit one with an eclectic selection. Morning sunlight illuminates shelves neatly stocked with jars of peanut butter, bags of white rice and pasta, tins of tomatoes, loose tea bags, cans of drinking water, and boxes of bran flakes. A refrigerator holds packages of baby Brussels sprouts and small tubs of Cabot Greek Vanilla Bean Yogurt. In a busy corner of the room, customers — mostly men — pluck baguettes, loaves of rye bread, even packages of focaccia and naan from the shelves and put them in bags.

No cash changes hands here, though, and, despite the cheerful lime-green walls, the mood is somber. More than 12,000 people trickled through the door of the Chittenden Emergency Food Shelf last year, and that number just keeps growing.

Some of the same pressures that force new waves of people to seek out emergency food — soaring fuel prices, unemployment, natural disaster and high food costs — are also putting the crunch on the array of agencies, farms and donors that scramble to serve them.

On a recent Thursday morning at the food shelf, the busiest section holds poppy-seed muffins, cupcakes and cakes — they disappear almost as fast as volunteers can put them out. Largely empty are the produce shelves, where winter pickings are scarce and have diminished since earlier in the week to a box of loose green lettuce leaves, a handful of turnips and some battered bell peppers. The only plentiful items are green orbs that could serve as doorstops.

“That’s kohlrabi,” offers one of the many volunteers who mill around restocking and offering help. Mondays are the best days to come, she adds — at the beginning of the week, the produce bins and the meat freezer are better stocked. Today, the few frozen chickens in the freezer go largely ignored.

Jane, a petite blond woman who arrives with a focused look, drifts past the chicken but ponders the kohlrabi before placing one in her bag. She looks stricken when a visitor tries to talk to her. “I’m mortified to be here. I’m college educated,” she says. An out-of-work single mom with two young children, Jane began using the food shelf last fall as her bills and challenges mounted.

The kohlrabi is just one of many unfamiliar items she’s picked up here — kale counts as another — that are donated by local grocery stores, the Vermont Foodbank, farms, and private individuals and businesses. In the last year, those donations have been dwindling, though — Tropical Storm Irene so trounced the Intervale farms, for instance, that their donations are down by more than half. Food-shelf warehouse manager Bill Dennison has noticed that, two holiday seasons ago, donations of food were more varied. This year, he says, “We had pallets and pallets of creamed corn, canned food coming out of our ears.”

Donations of staples such as peanut butter and cans of tuna fish, foods “high in protein with core value,” have fallen, says Judy Stermer, the Vermont Foodbank’s director of communications. So the Foodbank is buying more of those staples — sometimes at staggering prices — to augment the U.S. Department of Agriculture foods on which the nonprofit relies. Those purchases are one reason why the Foodbank will increase its food budget by 30 percent this year. “A more typical [yearly] increase might be 10 to 12 percent,” Stermer says.

Food prices are based on a complicated web of factors. For instance, last year, peanut butter cost the Foodbank $13.54 per case. Since then, peanut production has decreased due to the drought in Texas and farmers turning their efforts to more lucrative cotton crops, so the price is up. The Foodbank paid $23.39 per case for its most recent shipment of peanut butter, says Stermer. Instead of automatically offering it to food shelves, the Foodbank is now more likely to parcel out peanut butter by request only, or as an occasional item.

“In some ways, we try to mirror the grocery industry,” says Stermer. “We want people to have choice, and we want them to have staples such as pastas and meat.” But with 180 centers to supply, and eight million pounds of food to distribute each year, the Foodbank is working on making its mix more creative. Bulk foods are now playing a bigger part in maintaining the balance between nutrition and cost, both for the agency and its clients. About 5000 Vermonters use the commodity supplemental food program, which delivers 30-pound bulk bags of staples such as dried beans to eligible families, along with cooking tips.

At Burlington’s City Market, manager Clem Nilan has also seen bulk foods’ sales jump as the economy has tanked. “We’ve seen an increase in people buying primary products, so you can get a bigger bang for the buck,” he says. Also surging is use of the market’s Food for All program, which provides a 10 percent discount to customers who use 3SquaresVT cards. The number of food-stamp users at City Market has increased from 600 in 2009 (representing $60,000 in sales) to 1200 people and $1.3 million in sales in 2011. Very few seniors use the program, though, notes Nilan, “because of generational pride.”

At the Chittenden Emergency Food Shelf, “Bill” and “Ellen,” an eightysomething couple from Burlington, say they have been eating fewer expensive items such as meat, fish, oatmeal and milk as their living expenses have grown. As they place one of the frozen chickens in their pushcart, they wonder if more people don’t take one because they’d have to cart the heavy bird by foot or onto a bus. They feel lucky, they say, to have a car.

Trying to make ends meet on a fixed income, Bill and Ellen began using the food shelf one year ago. Some days are better than others, though on this particular morning they seem a little dismayed by the produce selection. “But vegetables are very expensive, too,” notes Bill thoughtfully. Even though their expenses are pinched, they won’t compromise on nutrition, eschewing some items because of their MSG content, for instance.

The couple exemplify the changing face of the food shelf’s clientele, which has grown by 20 percent in the five years that director Rob Meehan has been here. He’s seen up close how a person’s life can change with one stroke of bad luck, such as a car breakdown. “People lose jobs, or develop illnesses,” says Meehan, and they tap resources they never thought they might need.

Jane, 49, is just one of those people. As she loads bags into her SUV, she finally agrees to talk more with a reporter. She was living in Massachusetts when a divorce left her with sole responsibility of her two young children, one of whom has special needs. The situation propelled her back to Burlington, her hometown. Though she used to work in newspaper-ad sales, Jane says the high cost of living in northern Vermont, and the relative scarcity of decent-paying jobs “with Mommy hours,” put her on the financial edge.

“At first, I didn’t want to come [to the food shelf],” Jane says. “I was too embarrassed. I feel like there are people here who are in really bad shape.”

But she swallowed her pride and now comes every few weeks for bread, veggies and other staples. “I won’t bring my kids here, though. It upsets them,” Jane adds.

One upside, she says, is getting exposed to new kinds of food — such as the kohlrabi. “You have to be creative with what they give you. I’ve learned to cook a number of new things. But it’s going to take me 45 minutes to peel this damn thing,” she half-jokes. That prep time, Jane observes, might be better spent sending out résumés and making calls to help her land a job.

The real names of individuals interviewed at the food shelf were withheld by request.