Getting the Message: A local pet psychic talks about her animal instincts 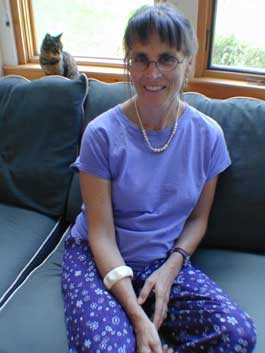 Julie Soquet talks to the animals. But unlike Dr. Dolittle, who chats out loud with his non-human pals, Soquet’s interspecies conversations are strictly a meeting of the minds. “I communicate telepathically with animals,” she says matter-of-factly. “Animals are much easier to work with than us humans. For the most part, they’re very direct; they’re completely genuine and very straightforward.” In addition to countless dogs and cats, Soquet’s conversing partners have included an iguana, a pig and a moose.

As an animal communicator, the Hinesburg-based Soquet is part of a long tradition with roots in the ancient healing practice of shamanism. She’s also among a growing number of professionals who make a living from the practice today. Sonya Fitzpatrick, the British “Pet Psychic” on cable television’s Animal Planet, is making a name for herself by talking to other people’s furry friends. She was featured recently in People magazine and Entertainment Weekly.

Numerous books are available on the subject, including Animal Talk, by Penelope Smith, whom Soquet credits as her mentor. Smith’s newsletter, Species Link: the Journal of Interspecies Telepathic Communication, advertises a radio show called “Kin-dred Spirits” and Anicomm, an e-group for professional animal communicators.

A delicate 54-year-old, Soquet operates her one-woman shamanic healing practice, Windhorse Consulting, from the secluded home she shares with Chia, her cat. That housemate contributed significantly to Soquet’s career choice. Following a severely debilitating back injury 12 years ago, she acquired both Chia and a book by Smith, and decided to experiment with her new feline companion. Those early attempts were less than successful, however. “I was just kind of playing around with that,” she says, “but I wasn’t sure anything was really happening.”

Better success came after Soquet attended a workshop in California where Smith — a pioneer in the field of interspecies communication — was serendipitously assigned to be her roommate. The two became friends and Smith encouraged Soquet to try her fledgling skill. “We would take these walks and she would try to get me to communicate with the goats or the chickens,” Soquet recalls.

A Wisconsin native, Soquet actually began reaching out to both wild and domestic creatures at an early age. She recalls childhood experiments in which she willed dragonflies to land on her.

It took a while for Soquet to find her current cosmic path, though. A post-college detour led her to graduate work at the School for International Training and a job in Boston as a business consultant. The brief stint in the corporate world “burned me out, spit me out and changed my life,” she says.

Soquet is now careful that her lifestyle supports her skill. A practicing Shambhala Buddhist, she meditates regularly and tries to live in harmony with nature.

“It wakes me up sometimes when I get too involved with my own mind and the craziness of life,” Soquet says with a slight chuckle, brushing her silver bangs from her forehead.

Clients like jazz bassist Ellen Powell are equally relieved that Soquet maintains such a way of life. She sold Soquet her house in Hinesburg and was elated when the real estate agent asked if the latter could meditate in the house before buying it.

Powell, who now lives in South Burlington, has used Soquet’s services several times, most recently with her “maniac” Welsh Corgi, Muffin. The dog had always been uncomfortable with car rides on the highway, Powell says, but on one particularly harrowing road trip she got caught under the front seat and was “severely freaked out.” As a result, Powell says, the dog suffered from terrible panic and trembling whenever she had to go for rides.

A call to Soquet resulted in a long-distance “soul retrieval” session with Muffin. “In the sha-manic tradition, they say during a trauma, a piece of your soul gets lost,” Powell explains. “Julie went and found the ‘playful piece’ that ‘fell off.’ She does great work.”

Though soul retrievals are not uncommon requests from Soquet’s human clients, they comprise only a small part of the work she does with animals. More often she deals with behavioral and health issues, including such common pet peeves as territorial disputes involving new animals in the home, adjusting to new surroundings, exhaustion and lack of attention from their humans. But “problems” are in the eye of the beholder.

“I’ve found that people will call and their animal’s having a problem from their point of view, but from the animal’s point of view, it may have something to do with the person,” Soquet says. “That continues to be a potentially tricky point in the conversation.”

Although she may have to approach the subject carefully, Soquet says her clients are often aware that they have to change something about their behavior or lifestyle to accommodate the animal. “Sometimes I tell people what they already know, they just need to hear it,” she says.

How exactly does Soquet converse with animals? “Sometimes it’s as though I’m having a conversation with anybody [human],” she begins. “Sometimes [it’s] a ‘knowing,’ a feeling in my body.”

Other times, she says, the message comes in the form of an image. “It’s like an intuition that I think everyone has had,” she says. “When you practice this a lot and when your intention is very focused, you just get a lot of that information right then and there.” Once, for example, she worked with a cat that continually pictured herself under a lamp. Soquet finally gleaned that the cat was cold.

Soquet has had some of her best success alleviating animals’ behavioral problems. Over the years she’s worked with a family in New Mexico that takes in abandoned animals. Since the number of animals in the household continually shifts, there are also constant adjustment and territorial difficulties. In one instance, the “alpha dog” of the household was feeling threatened by a new, larger canine addition to the family. After working with the dejected dog three times over the course of a year, Soquet finally got him to accept the new pet. “This dog was so bright,” she says of the consenting animal.

Soquet notes that calling on her is a reflection of the tremendous love people have for their pets. Her clients aren’t always the unconventional, holistic types one might imagine, she observes. “People who call for this kind of work are generally pretty open to the idea of it — or they’re desperate.”

Sometimes a client is so attached to an animal that he or she asks Soquet to check up on the pet after its death. In such a case, she embarks on an “upper world journey” — essentially a trip to the spirit world, though Soquet says she doesn’t think it’s all that different from this world. “Instead of driving to Charlotte, you drive to Shelburne,” she jokes.

Communing with a dead pet is similar to communing with a living one, the psychic insists. It’s just that the messages come from a different place. “The communication itself seems to happen maybe on a less physical level. It feels much more that it just comes and goes in the mind stream, so to speak,” she suggests.

People often harbor immense guilt after their pet’s death, Soquet reports, particularly if the animal has been euthanized. Some clients want to know if it will be reincarnated and whether the animal will return to them during their lifetime. Soquet doesn’t question the idea of animal reincarnation, but she concedes she’s less sure about the information she receives from deceased animals than live ones.

Despite understandable skepticism, Soquet says people are generally pretty accepting of the idea of animal communication. Maintaining her own confidence as a communicator is a greater challenge. “I’m a little more shy about it than I need to be,” she says. “Sometimes people are more open than I could have imagined.”

Soquet is disturbed that animal communication is being used for entertainment value. “I’m not into huge success and all that it entails. People get carried away and become more interested in the income, so that even if they have a talent for this something might get lost in the mix,” Soquet says, suggesting the profit motive could compromise the quality of psychic services. “We as human beings are tempted,” she muses.

This concern doesn’t prevent her from pursuing her own business. Soquet offers animal communication workshops locally and in Boston, and plans to add sessions in Montréal. But only those with a sincere interest in the practice need apply, she advises.

For her four-legged clients, Soquet charges on a sliding scale of $60 to $80 an hour, a fee that covers both the session with the animal and the preliminary phone time.

Animal communication isn’t about being a “super psychic,” Soquet offers, but about respect and the caring for the animal’s well-being. “I think animals are a gateway to remembering and relearning, and those kinds of things that would make this world a better place if we all felt our compassion and felt the magic of the world.”