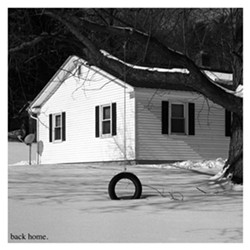 Following their excellent 2015 self-titled debut, Eastern Mountain Time return with a five-song EP, Back Home. Sean Hood and company enlisted Wren Kitz for support on this new effort, recording the tracks in Kitz' home studio over the course of 2016.

Back Home is a stripped-down collection of sad-boy country. It reiterates the band's love for classic '70s sounds pioneered by artists such as Gram Parsons, Willie Nelson and David Allan Coe. While their debut eponymous LP was charged with fervor and feeling, Back Home sounds a little threadbare.

"Four Gold Letters" is a good example. With only Hood's vocals and acoustic guitar present, it's a quintessential coffeehouse snoozer. Placed squarely in the middle of the EP, the song perilously lowers the recording's energy at a crucial point in its trajectory.

"Low Down Mid-December," however, shines by comparison. Bass and electric guitar create a warm, atmospheric cradle around the acoustic thrumming. The song glows like the last bit of sunlight over the Adirondacks at dusk. Hood's observations are honest and relatable, especially for those who struggle with the winter blues. He sings, "The car wouldn't start / first frost of the winter / So I just sat out in the drive / With sorry nostalgia like 100 splinters / And nothing but trouble on my mind." Anyone who's lived through a northern winter can relate to that bleak-ass tableau.

"Discount Pack of Cigarettes" finally brings some percussion to the EP, which makes the track bouncy and sunnier. But its lyrics remain as stark as those on other tracks. When Hood sings, "Got a discount pack of cigarettes / Shitty six of beer / Wondering where my friends might be / they're here," it's as though he feels his L&Ms and Schlitz are the only friends he has.

Overall, Back Home lacks staying power. While EMT's songwriting and production on the debut LP had oomph, here it is listless. Save for "Low Down Mid-December," the songs are too understated and indistinguishable. The production, too, is subdued. A keyboard track may have tied the band's previous work together in ways that are only noticeable in its absence. Perhaps these songs will be brought to life in concert.

Eastern Mountain Time play an EP release party on Friday, December 2, at the Monkey House in Winooski. Back Home is available at easternmountaintime.bandcamp.com.