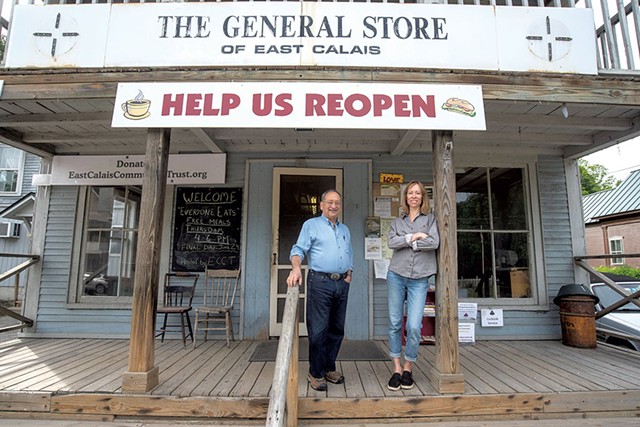 East Calais residents watched with concern for years as their 170-year-old general store struggled to survive before it closed altogether in 2019.

"It was basically running on empty," said Melissa Brough Marshall, who lives nearby. She said the woman who was managing it had trouble keeping supplies on the shelves. "She had basically run out of money to stock it."

Three years later, a group called East Calais Community Trust has raised $1.3 million in grants and donations and is preparing to put the building's restoration out to bid. Then the group is going to look for someone who wants to run the operation, which will fill the role that so many of Vermont's small-town general stores do: part grocer, part restaurant and part community center.

The trust is joining peers in many Vermont towns who see these stores as places that bring people together. These nonprofit groups are working to help locally owned general stores survive in the face of competition from convenience stores and supermarket chains.

"You have to be unique to your area," said Ray Sweeney, who last year bought the iconic Currier's Quality Market in the Northeast Kingdom town of Glover. Sweeney, who also owns the C&C Supermarket in Barton, said he has no plans to duplicate what's available at the C&C, just a few miles away. Instead, he said, he has a waiting list for dry-aged beef that sells for $30 a pound.

Just west of Glover, the store in the small town of Albany closed after a fire in 2013. It reopened recently after years of community fundraising.

Running a general store requires a willingness to work long hours, an outgoing nature and a commitment to the community.

"Financially it's not easy, to be honest." Melvin Coburn tweet this

In Strafford, Melvin Coburn has been running Coburns' General Store for 44 years, though its future is uncertain. Now a great-grandfather, he'd like to retire, but his children haven't shown much interest in permanently taking on the family's store. He thinks he'll probably put it up for sale in a few years. A bank branch and post office help pay the rent, and the store does a brisk business in summer.

But "financially it's not easy, to be honest," he said.

In East Calais, the organizers plan to renovate the 1850s-era building and create a business that includes a deli, a kitchen for prepared foods, a gathering spot with a gas stove and staples that appeal to a broad swath of the community.

The trust has put its faith in the store as a place that can bring people together, psychologically and economically. The need is greater than ever, said Marshall.

"I think we're going to see a lot of changes to the Vermont landscape in the next 10 years," said Marshall. She grew up in Woodbury but lived in Los Angeles for 14 years before moving to Calais in 2019 with her husband and their two daughters. She noted that the state is making a concerted effort to draw newcomers in as broadband and remote work alter rural communities.

"Having vibrant community hubs is critical to our communities growing in healthy, sustainable ways," said Marshall. "A store may not seem that important to that overarching goal, but I think it truly is. It helps create a sense of identity for the town if it remains locally owned and operated."

The East Calais Community Trust got a $100,000 grant from the Preservation Trust of Vermont to fix up the store, as well as a Northern Border Regional Commission grant and downtown and village center tax credits from the state. It has pledged to renovate the three apartments in the building for low- and moderate-income renters. Marc Mihaly, the head of the trust, said the group will have an office in the 6,000-square-foot building.

"The store is our first project, but additional projects could come out of this in terms of community building and development of the village," Mihaly said. Like Marshall, he sees the development of the store as a way to keep the community's identity strong in the face of inevitable demographic changes ahead. The group is already hosting local events at the store, such as weekly meal pickup for the Everyone Eats program and a free vegetable and egg pickup program on Saturday mornings. It has a book box for Montpelier's Kellogg-Hubbard Library on the porch and, on May 29, hosted a barbecue truck in its parking lot that quickly sold out its 400 meals.

"I'm a big actual believer Vermont is going to attract population," said Mihaly, who is chair of the Vermont Land Trust board. "We saw it with COVID; we'll see it with climate. I believe we're going to see half a million move here in the next 50 years."

Mihaly hopes some of those newcomers will settle in village centers.