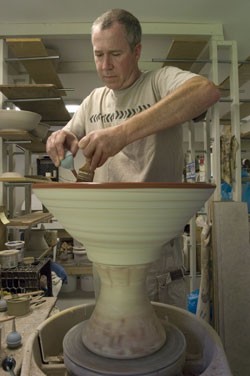 Home-makeover shows are fun and addictive, but so far they’ve missed out on a gem: Vermont Art Sinks. The handcrafted stoneware basins sit stylishly atop vanities made from recycled wood, or can be rimmed for counter sinking. Glazed in earthy browns and greens, the sinks look just as sharp accented with sleek, minimalist faucets as with more rustic-looking taps. Homeowners need no better excuse to update their powder room than, say, the “Liberty” sink in burnt rose, surface-mounted to show off its flared silhouette.

Despite the prevalence of first-person plural on Vermont Art Sinks’ website, there is only one person behind both vessels and vanities: Ed Racicot. The 45-year-old works out of his Westford home studio, a sunny, converted three-bay garage with French doors opening to a lawn. Since he started the business in 2003, Racicot has cleaved to two directives: make functional art; and reduce, reuse, recycle.

“One of the biggest things for me was, I didn’t want to produce a lot of waste,” says Racicot, a low-key but serious artisan who keeps his studio meticulously clean. The wood for his vanities comes from sources such as his sister’s dismantled barn in Jericho. He lines the cupboards’ insides with packaging veneer from Gardener’s Supply, a waste product he discovered through his partner Steve Gorton, who works there. Vanities are finished with a waterproof layer of Safecoat, a fume-free gloss that’s low in volatile organic compounds.

For clay, Racicot “pugs” (or blends) two parts pre-made clay and one part reclaimed trimmings, which he puts through a time-consuming moisturizing and pressing process to render reusable. He also mixes his own glazes, recycling leftovers whenever possible. Racicot applies the glaze with a brush while spinning pieces on the wheel — an eco-friendly alternative to dipping the items, which requires extra firings. (He also likes the variegated stripes he gets with his technique.) Racicot fires no more than three sinks at a time in his small-batch electric kiln, filling the extra space with matching sets of soap dishes, lotion dispensers and toothbrush holders.

The giant restaurant-supply whisk Racicot uses to stir his homemade glazes doesn’t give a clue to how tricky it can be to create those chemical concoctions. One deviation from a color recipe, mixed from tubs of powdered oxides, metals and silica, could render the result unusable, he says. But Racicot would never buy pre-made chunks of glaze instead. “If you’ve got a little scientist in your heart, that piece is fascinating,” he declares.

Racicot learned the science of glaze-making, as well as the art of pottery-throwing, from George Satchard, a ceramic lamp maker in Underhill with whom he worked before and after his high-school graduation, just as Satchard was moving into mass production. The gig made Racicot realize he needed to build up some savings before trying to earn his keep in crafts. “I saw how difficult it was not to starve, even for George,” Racicot says.

Over the next 20 years, Racicot, originally from Massachusetts, held “real” jobs: He worked for Green Mountain Power as a hydroelectric operator, then traveled constantly as a sales rep for IDX. He says, “9/11 was the impetus for wanting to do something else.” That meant majoring in education at Johnson State College, but his minor in art put him back on the crafts track. With another degree in business management from Burlington’s Community College of Vermont and months of practice throwing at Burlington City Arts’ Clay Studio, Racicot opened his first studio — in the windowless basement of an old Victorian on South Winooski Avenue.

After surviving the frigid winters in electric socks — armed with D batteries that made them fall down his calves — Racicot decided it was time to move. His Westford digs, where he’s been for a year and a half, feature a showroom he built and lined with shelves to show off his seven sink styles in every color. And it’s heated.

With orders coming in from around the country now, Racicot hasn’t felt the need to attend K/BIS — the national Kitchen and Bath Industry Show — in Atlanta this year. If he ever goes, though, HGTV may finally get the memo.

Ed Racicot's Vermont Art Sinks and vanities are available through Close to Home in Williston and Wood-Stock Kitchens and Baths in Essex, among other stores. See a full list at www.vtartsinks.com. Sinks can be ordered online or purchased at his studio at 38 Deer Run Lane, Westford.