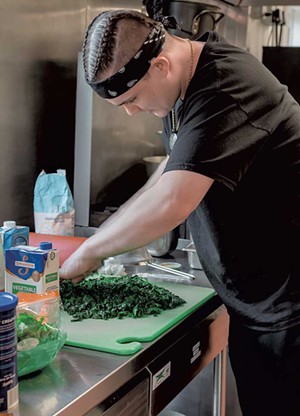 A Colchester native is returning home to open a grab-and-go breakfast and lunch spot at 506 Porters Point Road.

On December 5, chef-owner Deven Bora, 27, will start serving breakfast and lunch sandwiches, burritos, coffee, smoothies, soup, hot-bar dishes, and take-home dinners at Early Bird Catering in the former location of Big Apple Deli. The shop will also serve as the home base for the catering business Bora started earlier this year.

"I grew up down the road for most of my childhood, so it's really nostalgic coming back to my hometown," Bora said. "It's gonna be a big face-lift in terms of what's been there in the past."

The hot bar, which will feature dishes such as mac and cheese and spicy Filipino chicken adobo, "will let us have a lot of creativity," Bora said. Delivery will be available through DoorDash.

Bora hopes that his elevated, premade grab-and-go meals, such as lasagna and chicken Alfredo, will fill a void in Colchester's dining scene. "It gives the store that bit of convenience it's always had," he said, "while making it fast, healthy and friendly."

Five years ago, Bora graduated from Community Kitchen Academy, a culinary job training program run by Feeding Chittenden and the Vermont Foodbank. He recently stumbled on the five-year plan he made as part of his curriculum.

"It was kind of vague," Bora said with a laugh. "But it's ironic how much of it has actually come true."