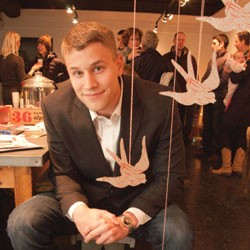 “Burlington is missing something it used to have,” declares Liza Ciano. She aims to help bring back what she sees as a creative-merchandising gap through her store, Lotus, which relocated from College Street to 88 Church Street this month. Ciano views Lotus’ move and the attendant revamping of its product line away from yoga supplies as an “opportunity to offer something different.”

Fifty or so curious locals attended the December 10 opening of Lotus to check out that “something” — an eclectic array of high-design household objects as well as books on art and architecture. The event itself was certainly unlike most such openings. In addition to offering the usual wine and cheese, Ciano arranged for a 40-year-old avant-garde film by Charles and Ray Eames to be projected on a shop wall. And the great-grandson of that dynamic design duo, Burlington resident Ross Atwood, gave a talk on the Eames’ continuing influence on American furniture.

Karen Hewitt, founder and president of Burlington-based Learning Materials Workshop, found this “a wonderful way to open a store!” Some of the toys and blocks made by her business are available for purchase at Lotus.

“Connections between people and ideas were the most important part of the Eameses’ design work,” Atwood told the gathering. He made a fortuitous connection with the shop a few months ago when he noticed a Noguchi lamp on display in the window. Because Charles Eames had worked with Japanese-American sculptor Isamu Noguchi, Atwood went inside and started a conversation with Ciano, and that led to his presentation last week about his great-grandparents.

Ross Atwood consults on his ancestors’ legacy through an exhibition and sales center based in Santa Monica, Calif., known as the Eames Office. After graduating from UVM, Atwood attended the New York Film Academy, which, he says, reinforced for him a principle at the core of the Eames’ career. “I learned that you can’t just shoot something without planning the shot,” he explains. “I saw there were real consequences to failing to get it right.”

Charles Eames (1907-78) and his wife Bernice “Ray” Eames (1912-88) similarly “believed you’ve got to learn technique and not just become familiar with it but really have it sink in,” Atwood says. “That’s one of the main things that made them so great.”

The Eameses are best known for their Lounge Chair Wood (LCW), first produced in the 1940s. It and several other Eames furniture pieces are included in the collection of New York’s Museum of Modern Art. The LCW is still manufactured — which Atwood sees as proof of its “timelessness.”

Recounting the chair’s development, Atwood describes the molded-plywood piece as “an array of complex curves that fit the human body — a perfect blend of form and function.” It’s also an embodiment of the Eames’ view that design should solve problems, Atwood adds. Not only did the couple develop the technology that made the chair’s production possible, they applied the process to the manufacturing of splints for the U.S. military during World War II.

Ciano shares the philosophy that design should not only function well but look good, too. “You should fill your home with things that grace your life,” she declares. “You don’t need all the mass-produced crap.”

Lotus will continue to offer its own line of Saka Yoga Accessories as an online distributor. The new shop carries a few Eames-related books and videos as well as the Eames House of Cards game, and Ciano says she hopes to sell some of the design team’s iconic furniture items in the coming months. Lotus also still stocks the Noguchi lamp that lit up the relationship with Ross Atwood in the first place.

“Independently owned and operated small businesses in Burlington are important to maintaining the character of the city,” Ciano asserts. “Locally owned shops reflect the tastes of their owners and make the shopping experience interesting.”

Speaking of State Of The Arts, design