E-Gads: The Town of Castleton Pulls the Plug on a Digital Democracy Experiment

You can track down a lost pet, publicize a bake sale, rally neighbors to help a family in need. All are benefits of Front Porch Forum, a hyperlocal, web-based service that combines the functionality of classified advertisements with the small-town appeal of useful gossip.

What’s not to like about it? Plenty, according to the town of Castleton, which claims the online networking tool turned debate among local citizens into cyber feuding.

Officials in the Rutland County town pulled the plug after just a few months of experimenting with FPF, which allows neighbors within a certain geographic proximity to communicate with one another via email.

While Castleton’s residents can continue to use the service, the selectboard and town manager have withdrawn their support from the forum after personal attacks began surfacing in the run-up to a contentious Town Meeting Day vote.

“It’s not the right forum for congenial conversation,” says town manager Charles Jacien. He says the online discussion deteriorated around a bond to build a new town office. Mold and structural concerns had forced officials out of a historic building in the village and into modular units last summer. Town officials were pitching a $2 million facility to house town offices, as well as police, fire and emergency responders.

The opposition mounted a strong case — to preserve the historic structure instead of erecting a new one. In the end, the town knocked down the proposed bond vote by a roughly two-to-one margin — an outcome Jacien attributes at least in part to FPF. Some town officials voiced opinions that weren’t in “lockstep” with the boards’ stated views, according to Jacien. An “incestuous” group of FPF users “talking amongst themselves” exerted undue influence over their fellow townspeople, he charges.

But residents such as John Hale, the chair of the planning commission, feel it’s not so simple: “They won’t listen,” he says of the town government, pointing to the rejection of FPF as evidence that current town officials can’t tolerate any opposition within the community.

“It’s shortsighted of the town to decide to stop using it,” says Hale, who supports the renovation of the old town building and ran unsuccessfully for a selectboard seat in March.

Castleton’s response is an anomaly: FPF has grown at a rapid clip since its incorporation in 2006. From its Chittenden County roots, the service has expanded to 70 Vermont towns. In 2010, the for-profit company teamed up with the $3.7 million e-Vermont Community Broadband Project, a program to help rural towns tap the advantages of the internet. The e-Vermont funding — cobbled from a variety of private and federal sources, including a $2.5 million federal stimulus grant — brought FPF to all 24 of the Vermont towns selected for the program.

Among them was Castleton, where Jacien says residents and town officials alike were excited about the new tool.

At the very top of the list of the town’s priorities was an initiative to build community connections by using FPF. An optimistic summary on the project list expressed the hope that improved online communication would “spill over into more community engagement off-line as well,” and that Castleton’s FPF could bridge the local community’s multiple divides: between the downtown and Lake Bomoseen, and between the Castleton State College community and town residents.

He says some users launched personal attacks and others spread “misinformation.” Selectwoman Cristine Smith says that other factual errors caused confusion. When one resident incorrectly posted the time of an upcoming board meeting, onlookers showed up an hour early.

Jacien and Smith stress that Castleton officials aren’t Luddites; in March, the town unveiled a new website. They’re simply choosing not to engage in more interactive social media, which Jacien actively discourages among town officials. The town government, he says, should have “one central message, one policy, and that should come through our website.”

Again, Hale disagrees. He admits it was wrong to post a personal comment on FPF while also identifying himself by his position on the planning commission — a mistake for which he says he was “severely upbraided.”

That said, “I do take some exception to the thought that there is a ‘town line,’ that all officials in the town must speak with the same voice,” says Hale. “I certainly wasn’t sworn to allegiance.”

Sean Sheehan is the e-Vermont community director who oversees the Castleton project. He says it costs about $2500 for e-Vermont to bring FPF to a community, but that it’s “not the end of the world” that Castleton town officials won’t be making use of it for the time being. E-Vermont also paid for Castleton’s new website. Sheehan warns that the statistics from most municipal websites around Vermont show “that exposure is going to be nowhere near the exposure you’ll have on FPF.”

FPF cofounder and CEO Michael Wood-Lewis declined to discuss specifics of the situation in Castleton. However, he points out that of the 36,000 Vermonters using FPF, hundreds are town officials, and the reviews are largely positive. “Very rarely there’s a dustup where somebody gets upset,” Wood-Lewis says.

But it’s not unusual for officials to balk, at least initially, at the impact of new technology. Lauren-Glenn Davitian, the executive director of the CCTV Center for Media & Democracy, headed up the move to cablecast local meetings in the 1980s. At least one town — Colchester — wasn’t cooperative in the process. Why? Davitian couldn’t say exactly, but she has her suspicions.

“They were used to doing business behind closed doors,” she says. “If I had to guess, it was that people would see that they weren’t any smarter than anybody else, and they would lose their positional advantage in the community.”

Within six months of bringing cameras into Colchester’s meetings, however, officials were singing a new tune. Today Davitian doesn’t hear any squawking about televised meetings and the role they play in conducting government business. Officials are “unanimous in their belief that having a vehicle to open the doors of government only serves the people … and helps them to do their jobs better,” she says.

Davitian concedes that a participatory online forum and public-access television are entirely different beasts — and she understands why some “beleaguered” town officials might be wary. “I think a lot of these people are feeling like there’s more public input than we can realistically manage, and we want to manage expectations.”

That resonates with Bill Bryant, the town manager in Bristol, another e-Vermont town now using FPF. Bryant thinks the network is a useful tool, especially for distributing information to residents who might not otherwise check the local paper or stop by the town offices. It’s also a great way for residents to share opinions with each other about local issues.

But FPF isn’t a public hearing, says Bryant, and “that is not the appropriate place to engage public officials.” Crowdsourcing a question — for instance, does Bristol chlorinate its water? — is likely to be less efficient, and potentially stir up more trouble, than a single phone call to the municipal offices.

Bryant says he’s never sure when to weigh in. And to catch those questions, he says, “you’ve got to read through all of the garage sales and the ‘I’ve lost my dog and found your cat’ stuff.”

Meanwhile, whether it’s lost dogs and cats or town gossip that pulls them in, Castleton’s residents are still using FPF. The town’s decision not to participate on the forum has no bearing on residents’ ability to access it. Even Jacien is still reading, though now he uses a personal account and stands on the virtual sidelines. 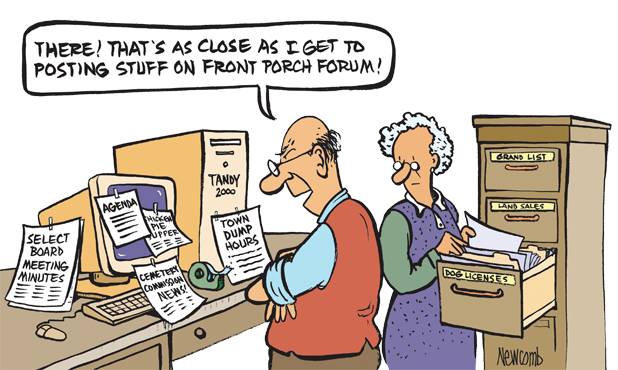