"Dykes to Watch Out For" Goes on Hiatus 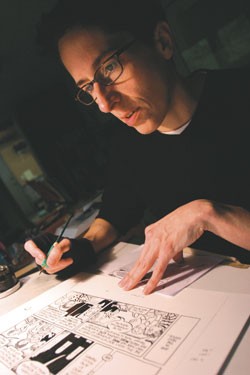 Check out the episode of “Dykes to Watch Out For” that appears in Section B of this week’s Seven Days. It’s the last one you’ll see “for the foreseeable future,” says Bolton cartoonist Alison Bechdel.

Last week, Bechdel announced she’s taking a break from her biweekly comic strip, which chronicles the adventures of a group of lesbians and their non-lesbian pals. “I’m calling it a sabbatical,” she explains.

Bechdel, 47, began drawing “DTWOF” for Womannews in 1983. Over the years, it’s appeared in more than 50 GLBT and alternative publications in the U.S. and abroad; Seven Days picked it up in 1997. “DTWOF” has spawned calendars, tchochkes, T-shirts and 11 book-length collections published by lesbian-feminist Firebrand Press.

But Bechdel’s career took a dramatic turn in 2006, when Houghton-Mifflin published Fun Home, her graphic memoir about life with her closeted father. The book drew press coverage and rave reviews from the mainstream media, including The New York Times and People magazine. TIME Magazine picked Fun Home as its top book of the year in 2006.

Fun Home’s success has kept Bechdel busy with interviews, speaking engagements and more work. Houghton-Mifflin bought her second graphic memoir, Love Life: A Case Study, which she has to finish by fall 2009. “That sounds reasonable for a book,” she offers, “but for a graphic book it’s a little insane.”

This fall, the publishing company is also releasing The Essential Dykes to Watch Out For, a 25th anniversary “DTWOF” collection. It’s the first time all the comics will appear in one book. Work on it prompted Bechdel to suspend the strip. “I guess it felt like a certain natural pausing point,” she explains.

The sabbatical has already allowed her to accept other assignments. The day after she decided to take a break from her biweekly commitment, Entertainment Weekly called her to commission a graphic essay.

At this point, Bechdel is not sure when — or even if — she’ll return to her regularly scheduled “DTWOF” programming. She admits there’s a “slim chance” she’s done for good, though she intentionally didn’t close the door. And episode 527 doesn’t feel like a finale.

“It’s quite traumatic to stop,” Bechdel concedes, “but already, one week in, I’m feeling a tremendous sense of freedom and expansiveness. I can’t even begin to tell you.”