Dying to Get In | Books | Seven Days | Vermont's Independent Voice

Dying to Get In 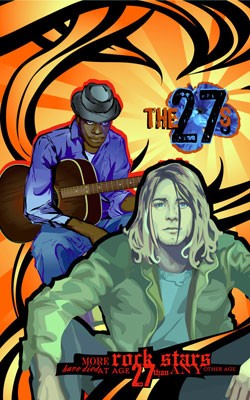 Jim Morrison. Jimi Hendrix. Janis Joplin. Kurt Cobain. All were monumentally important figures in rock ’n’ roll history. And sadly, each is a member of rock’s most grimly infamous club, The 27s.

For the unfamiliar, The 27s refers to the eerie, and largely unexplainable, phenomenon of rock stars dying at 27 years of age. It is also the title of a new book by Norwegian-born author Eric Segalstad and illustrator Josh Hunter. The paradoxically lively tome explores the grisly mystery in vivid yet reverential detail, from household names like Janis and Jimi to lesser known but nonetheless influential artists such as early R&B singer Jesse Belvin, Big Star’s Chris Bell and more recent inductees including The Mars Volta’s Jeremy Michael Ward.

Seven Days recently caught up with Segalstad, now a Burlington resident, to chat about the book, which was released nationwide last week.

Seven Days: So, what do you think “The 27s” really is? Is it a curse? A coincidence?

Eric Segalstad: I don’t really believe in … well, I’m very factual. Both my parents are scientists. And I’m not a scientist, but I kind of have that in the back of my mind, in that I try and find an explanation for things. As I’ve gotten older, I’ve realized that there are a lot of things I can’t explain, that people, like mankind, might not be able to understand or explain.

While we were doing research for this — and I mention this in the book — there was this survey that was done by researchers out of University of Liverpool in England. And they looked at rock ’n’ roll star deaths. They wanted to see if it’s true that rockers die younger than the rest of the population. And they found that to be the case.

So I looked at the research methodology and went through and found that they had 14 27s on their list. I guessed that would be the highest number by far out of any other age, more so than 28s, 33s or 56. So I called up the doctor in charge of the research [to verify], and he told me that, yes, that was the case. He couldn’t explain it. But that was the case. It’s a weird outlier.

SD: That’s one of the reasons I liked that you started with Robert Johnson. There’s the whole “selling his soul at the crossroads” legend, which I think works as a metaphor for rock stardom in general.

ES: And that’s why, at the end of the book, we’re kind of trying to debunk that myth. That he didn’t sell his soul at the crossroads to the Devil. But at the same time, it’s still underlying through the whole book, even though that myth is debunked.

It’s just interesting. I like what Neil Young talked about, the creative burn that lies within all true artists. And you can only let that burn for so long. Some people who just have a really, really strong burn, if you will, they probably burn out earlier than other people, for whatever reason. That might be in a car wreck. But you know, it might also just be the way they need to go, because they really can’t create anything more.

What would Hendrix have done if he had lived today? It’s sort of irrelevant because he didn’t. He was in the spotlight for three years. And he managed to change music forever. And that’s pretty impressive. He doesn’t need to do any more. How could he keep that up?

But a few people can, like Miles Davis. He was able to reinvent himself constantly. But the way he did so was by playing with really young musicians, because younger people have a tendency to veer out and explore new things. But most people can’t do that.

SD: Most books like this one eventually undergo a “revised edition.” But if you come out with a second edition, isn’t that sort of a bad thing, because it means there’s a new member of the club?

ES: Absolutely. But I think it’s a continuing story. I’m still trying to process Jade Goody, the British reality star [who died in March at age 27].

If you look at the stars in the ’60s and ’70s, they were the rock ’n’ rollers. There were a few movie stars. But rock ’n’ roll guys were really “it,” in terms of media attention. And today you’re starting to get famous for being famous … So Goody died at 27, and maybe that’s how this is starting to work out. And in the ’80s you had Jean-Michel Basquiat, Andy Warhol’s protégé. He was sort of a rock ’n’ roll artist, he died at 27. We didn’t focus on that in the book. But maybe over time there will be a new pattern.

Look at Britney Spears. If we’d had this conversation a year ago today, we would have been, like, “Yeah, she’s a complete mess.” But she’s 27 now and she’s cleaned up her act. Unless a freak accident happens, she’s probably gonna be all right. But what about Amy Winehouse?