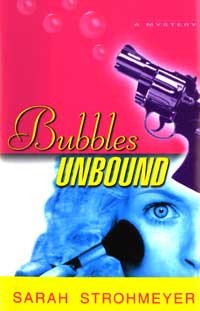 Most girls leave their Barbie dolls behind, abandoning them along with other childish things when adolescence beckons. Some of us reject Barbie when, with nascent feminist outrage, we finally become aware of the impossible physical ideal she represents. Even now, after the proliferation of professional outfits and ethnic skin tones for the doll, nobody is fooled.

Somewhere along the way of adulthood, Sarah Strohmeyer decided to keep on “playing Barbies” — you might even say she’s on a mission. But her goal is a lot more substantive, and fun, than simply wooing Ken.

A Montpelier freelance journalist and mother of two, Strohmeyer committed her first Barbie project to paper in 1997 with the nonfiction Barbie Unbound: A Parody of the Barbie Obsession. The book imagines the shapely plastic doll in a variety of unorthodox roles.

Now comes Bubbles Unbound, in which Strohmeyer, 38, has created a real, live, working-class reporter and sleuth with serious Barbie-esque qualities: She’s tall, curvaceous, bottle-blond and stylish in that Erin Brockovich way — that is, with a penchant for cleavage-revealing tube tops, hot pants, high heels and anything Spandex. At 34, Bubbles is a Polish-German-American divorced hairdresser in Lehigh, Pennsylvania — a steel town — with a smart, punky 15-year-old daughter named Jane, whose own style boasts piercings and multi-hued hair courtesy of Kool-Aid.

Bubbles is beautiful, sexy, has a self-deprecating, quick-witted sense of humor and a heart of gold. But there’s just one little problem: She’s not the brightest bleach in the bottle. Bubbles has flunked just about every course there is at the local “department store community college” in her ongoing efforts to improve herself. Finally, something clicks: journalism. And that’s because Bubbles has perfected more than hair, makeup and nails at Sandy’s House of Beauty:

I eventually found out what journalism was, and I’m pleased to say I was a natural. Because when you combine all that asking, snooping, investigating, not to mention the who, what, where, when and why stuff that reporting requires, it comes down to one word.

And gossip is how a neighborhood hairdresser like me earns her bread and butter. After years and years in the beauty biz, my sympathetic ear was superbly tuned for human tragedy.

It was at Sandy’s that Bubbles had met Laura Buchman — a pretty high school cheerleader from a good neighborhood — when she’d come in to have her hair dyed black. She was going to sing with her new boyfriend’s band, she’d told Bubbles. The next day, she was dead, and not from the coloring job. Though her death was ruled a suicide — a drug overdose — Bubbles was convinced she was murdered. Some 10 years later, where the book’s story begins, she gets a chance to prove it.

In the rollicking escapades that follow, Bubbles Yablonsky sticks to her asking and snooping even after the local steel-mill owner — an oily despot who rules the town and nearly everyone in it — responds to her very first story with a lawsuit for libel. Her determination to find out who killed Laura Buchman puts Bubbles in harm’s way more than once, not to mention in humor’s — and love’s.

With a breezy, snappy writing style that never lags, Strohmeyer manages to build suspense even while cracking jokes and developing a romance between Bubbles and a handsome AP photographer named Steve Stiletto. You know Bubbles will survive in the end — after all, she’s ostensibly written the book in first person. But you can’t help worrying a little when she’s hanging off the side of a bridge with a wannabe suicide who turns out to be her old math teacher; is nearly suffocated by one of the steel magnate’s thugs; is staring down the business end of a revolver; or is temporarily blinded after she’s slipped a nasty eyeliner containing an ingredient that sets off one of her several allergies.

Strohmeyer’s real gift is in vibrant details. A steel-country native herself, she paints the habitat and the story’s other characters with a knowing eye and ear. Bubbles’ mother LuLu is not just a standard-issue Eastern-European babushka; she’s four-foot-five-inches of Pug-like scrappiness and smirky one-liners who “borrows” dresses from the store and spreads dried peas across her kitchen floor for a security system. Lulu’s best friend Genevieve is built like a tank, barks orders like Janet Reno, and is a conspiracy theorist of the finest order. The schlumpy policeman who moons faithfully but hopelessly over Bubbles is a hapless single parent of five, and demonstrates the true courage of friendship. Her ex-husband, whom she calls “Dan the Man,” is a social-climbing sleazebag who left her for a wealthy woman — the heiress of a Cheetos-like snack food empire — after Bubbles shampooed him through law school.

Only Bubbles’ love interest, Stiletto, is drawn with a somewhat broader, gothic-romance brush:

The door to the House of Beauty slammed behind me and I stopped still. A tanned man who appeared to be in his mid-thirties sat in the driver’s side of a black Jeep, top down, with white New York State license plates. His brown hair was longish, but not too long, and his tanned face was creased in all the right places, like he just finished a tough day in the sun rounding up cattle on a ranch. I couldn’t tell what color his eyes were because they were masked by a pair of very dark, very expensive Ray-bans.

Sandy’s warning to keep my knees locked suddenly seemed inadequate. What I needed was a dead bolt. Preferably one without a key.

Despite Bubbles’ drooling over this hunk, it’s the revelation of his true identity — and her unexpected response to his ardor — that gives the book its real surprises near the end.

If Bubbles Unbound sounds a little girlie, it is. A few end-of-chapter beauty recipes — “Jane’s Hair Dye,” “Ten Steps to a Bubbles Deluxe” (facial), “Tiffany’s Avocado and Mayonnaise Hair Repair” — are over-the-top details only women and drag queens could appreciate, and don’t do much to advance the story. Strohmeyer wisely drops this conceit once the plot thickens, however — as Bubbles is pulled deeper into the drama of a murder investigation and away from the security of her cut-and-color micro-universe.

The daughter of a Pulitzer Prize-winning journalist, Strohmeyer does credit to her own reporting background — she’s written for Vermont and national publications — in her first work of fiction. And with Bubbles Yablonksy, she’s created a most likeable, if unlikely, heroine. Though it’s hard to imagine how she could top herself, Strohmeyer is at work on the next episode. And for fans of contemporary mysteries with quirky female sleuths, that surely sounds even better than a Bubbles Deluxe.

After dinner, Sandy drove Jane to work at the ice cream shop in my Camaro. I sat at the kitchen table by the window enjoying the cool breeze on my neck while Mama cleaned up and Genevieve spread a fresh layer of dried peas on the kitchen floor.

A real stiff wind was picking up, wafting the sulphur smell from the steel plant across town. Genevieve said we were in for quite a storm, what with the intense heat and the way the leaves on the trees were blowing inside out now.

“I wouldn’t be surprised if I lose power out my way,” she said. “We always do in that kind of weather, don’t we, LuLu?”

“We do,” Mama agreed. “The power lines to that high-rise are made out of dental floss, they’re so flimsy.”

That power excuse was convenient, but Genevieve wasn’t fooling me. Here she was a card-carrying, lifelong conspiracy nut, and for the first time in her seventy years she had a real, live conspiracy to work with. Murder. Shootings. Missing editors. Missing dead rock star impersonators. Dangerous eyeliner.

Genevieve was in hog heaven.

Plus, Mama was happy to have her around.

My eyes began to hurt, as Donna had forewarned, right after nightfall. Genevieve brewed me a eucalyptus potion. I drank it and popped a few painkillers from the hospital, sat back in the BarcaLounger and felt my brain spin as I listened to Wheel of Fortune.

“Uhm, Genevieve,” I mumbled sleepily, “there wasn’t any alcohol in that drink, was there?”

“Nah,” she said. “A tablespoon of Vladisk, for medicinal purposes.”

I groaned. Vladisk is a Slovakian brandy that could clean rust from pots. One tablespoon of Vladisk on a full stomach without painkillers would be enough to plaster an elephant.

At one point, I heard Mama say to Genevieve, “Help me get her upstairs,” and the next thing I knew two old ladies were ripping Doris’s tennis outfit off me, pulling a nightgown over my head and brushing my teeth.

Then they were gone. I lay in bed, the breeze from the approaching storm blowing over my body. I didn’t know if it was eight o’clock or midnight. Light or dark. I faintly heard the mumbling of the TV downstairs and then Genevieve and Mama talking quietly. Car horns beeped outside.

When I woke up again it was to the sound of loud thunder clap. Rain was pouring down in buckets outside my half-open window. The TV was off. Mama and Genevieve were asleep.

But I was not alone in my room.