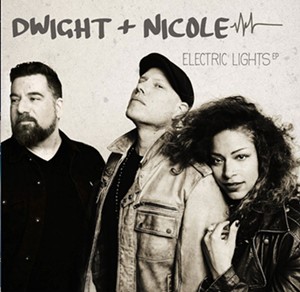 In case you don't know the backstory behind bluesy rock band Dwight & Nicole, here's a quick primer: In the early 2000s, guitarist Dwight Ritcher and bassist Nicole Nelson met and fell in love as working musicians in Boston. After bouncing around for a bit, the couple landed in Burlington in the early 2010s, despite success and attention in larger markets — including accolades from the Boston and New England Music Awards and Nelson's breakout performance on the third season of NBC's "The Voice."

Now, the project might as well be called Dwight & Nicole & Ezra. Drummer Ezra Oklan, known for his work in Kat Wright's band, is solidly a member of the group. And like soul sister Wright's 2016 album By My Side, Dwight & Nicole's new EP, Electric Lights, combines enough analog nostalgia with modern pop sensibilities (and commercial appeal) that it's bound to attract a fairly diverse audience, including some newcomers. Though only a brief 18 minutes long, the five-song collection is sharp AF with no filler — only hits.

In a near fake-out, the titular opening track starts up with rave-ready sliced synth. Are we headed to the club? But seconds later, Ritcher's jangly guitar grounds the cut in familiar, rootsy territory. A stomping beat enters, cutting the time in half and providing Nelson a loose groove on which to lay her breathy, ghostly vocals.

"If you can hear me now / Just lean in close to me / When all the lights go out / There's still so much to see," she sings. Acceptance, tenderness and optimism are ongoing themes throughout.

"Hi Lo" oozes with retro charm. Instantly evoking Norman Greenbaum's gospel-rock hit "Spirit in the Sky" with a gravelly guitar, Ritcher takes lead vocals atop hip-shaking tambourine. Nelson harmonizes on the chorus as the couple sings about rolling with the punches. At the midway point, Ritcher delivers an unhinged blues guitar solo, revving up the intensity on the otherwise even-keeled song.

Under gobs of reverb, gut-punch kick drum opens the dirge-like song "Wait." Layers of phased synth bass and snarling electric bass provide a sturdy foundation for Nelson's soulful belting. Like a scene from a tent revival, you can almost see glorious, late-afternoon sunlight limning the neck of her axe as the track erupts into a crushing showstopper.

Country-tinged love songs "Feel the Same" and "Hearts" round out the EP. The former feels wistful, like watching the countryside stream past you through the window of a moving vehicle while your mind wanders to a long-lost lover. The latter is an uncomplicated, thigh-slapping ode to the ooey-gooiest of romantic feelings.

Under the supervision of Grammy-nominated producer Joel Hamilton, Dwight & Nicole triumph in their first new material since 2014. As always, romance takes center stage. And particularly in these troubled times, love is an especially welcome message.

Electric Lights is available on iTunes.