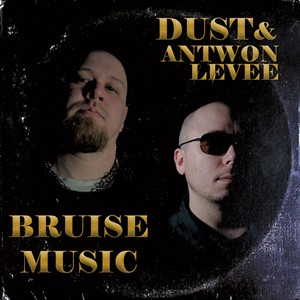 Dust & Antwon Levee are perhaps the most promising rap act to emerge from the growing Plattsburgh hip-hop scene. (Dust is the MC; Levee is the producer.) The duo's sound is timeless — which is to say, both extremely retro and hyper-modern. The recently released LP Bruise Music is their cleanest, meanest piece of work so far and a landmark release for the Lake City.

Levee's production is rooted in thumping bass, drum-machine-style loops and carefully developed songs. His compositions only seem simple: Every note, every drum hit, is calculated for maximal impact. He's also got a real knack for building harmonies and hooks.

That classic sound is a perfect counterpoint to the brash whirlwind that is Dust. He’s profane, clever and full of tight flow patterns. He’s a well-read writer who’s fond of shock value: How many rappers would brag about how they’ll “erase a racist” and “rape a rapist,” as he does on ”Everything Dope”? He’s also a self-deprecating braggart. “This is my year / Oh, shit, I’m broke,” he informs on the same track, “Still, don’t nobody wanna get this smoke.”

Clearly, both artists listen to a metric shitload of rap from all eras. Their influences are broad, their in-joke references endless. Yet for all the genre-hopping workouts here — from the West Coast funk of “Malt Liquor” to the dark horrorcore synth attack of “Blood Magick” — Bruise Music is a remarkably consistent album. What holds it all together are Levee’s percussive sensibilities and Dust’s dedication to genuinely catchy rap hooks.

Well, that and the rapper’s relentlessly show-off flows. Even at his most frat-party braggadocious, Dust’s pen game remains impressive; witness the Beatnuts-inspired “Greenback” or the melancholy album closer “Tarpit.”

Indeed, Dust carries the first half of the album so effortlessly, it’s almost jarring when guest rappers show up in the second half. First up: Benn Rymon, whom Benn Rymon, whom Seven Days reviewed in these pages back in 2017. Rymon has been a tireless advocate and sparkplug for his scene, and he delivers a standout 16 here.

The other two features are a study in contrasts. Saturn Lunarnova offers a breezy, chopping verse on the funky “Selfless” that’s a stoner slice of life. Then there’s Samheinous, who absolutely lives up to his name on the gleefully crude “Matinee Sex,” a pornographic ode to fucking on lunch break. He shouts out Radio Bean, Samuel de Champlain and elbow fetishes — and that’s all before the hook, which is a clear nod to shock-rap godfather Kool Keith.

Indeed, if Bruise Music has a single downside, it's Dust and Levee's 2 Live Crew-style willingness to offend. I had a blast listening to the album, but conscious rap fans and speech police of all persuasions will be turned off immediately. Still, the duo's skills are undeniable, and their product is pure. As Dust raps in the final seconds of the LP, “It’s Antwon and Dust / ask ’em who’s the best and I bet that they tell you us.”

Bruise Music is available at antwonlevee.bandcamp.com.