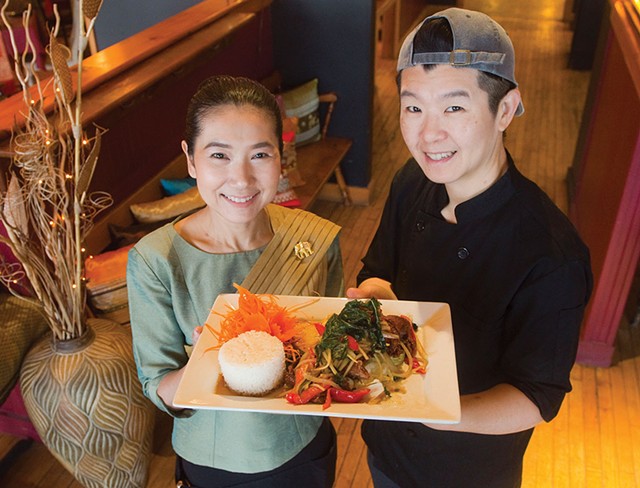 It's hard to imagine a place more different from the steamy, bustling Thai capital of Bangkok than the quiet northern Vermont community of Newport, on the breezy shores of Lake Memphremagog. But the two locales happily collide in the cuisine at Dusit Thai, which includes fragrant basil- and lemongrass-scented curries and noodles.

The restaurant's married co-owners, Panadda "Exzy" Saengsiri and Jintana "Jinny" Thananusak, brought recipes straight from their homeland. The women first came to Vermont in 2013 to visit friends in Middlebury and quickly fell in love with the peaceful, pastoral state. Upon hearing of a restaurant for sale in Newport, they decided to drive up to see it. "Jinny loves to cook and share Thai food," Saengsiri says of her spouse, the restaurant's main chef.

Despite a car accident on that first road trip, they knew Vermont was the place for them. "We never drove on snow before," Saengsiri recalls with a laugh, "but we like cold!" They were ready to escape Bangkok's hustle and bustle, she explains, and found Newport "not too quiet, not too busy, with very nice people."

Dusit is the Thai word for "fourth heaven," and for many regulars, the elegantly appointed, high-ceilinged eatery and its approachably exotic menu meet that description. One young fan recently sent a card illustrated with elephants — referencing Dusit Thai's décor — and offered thanks for "the prettiest, calmest and BEST restaurant," along with praise for the fried spring rolls.

Many of Dusit Thai's dishes can be ordered in varying degrees of spice, but Saengsiri cautions with a smile: "Our medium is not regular medium; it's Thai hot. Be careful!"