During a Discussion of Bias Against LGBT Victims, a Senator Invokes a Racist Trope 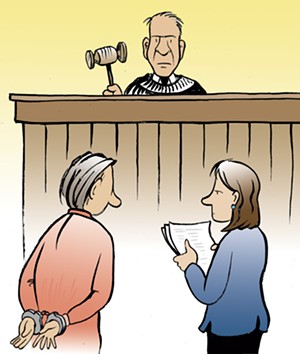 Two grim topics this week: One concerns sexual encounters that end in violence; the other involves racist comments by a Vermont lawmaker.

First, the "gay/trans panic defense." In one scenario, a cisgender man learns mid-seduction that his partner in a sexual encounter is transgender. In another, a man who is conflicted about his sexual orientation suddenly recoils during an encounter with a gay man and turns violent, sometimes killing the person.

In court, the perpetrator's lawyer argues that his client's panic was so disorienting that it mitigates or even justifies his violence. No one knows of a Vermont case unfolding like this, but there have been examples around the country. And, believe it or not, this panic defense — playing as it does to the anti-gay and anti-trans biases of too many judges and juries — has met with some success in winning reduced charges or sentences, and even verdicts of "not guilty."

Enter Rep. Taylor Small (P/D-Winooski), the first transgender member of the Vermont legislature and the cosponsor of a bill, H.128, that would bar use of the panic defense during a trial or at sentencing. The bill would block juries and judges from considering it.

In an interview, Small described the thinking behind the proposal. First, allowing the panic defense encourages and, to some extent, codifies bigotry. Second, transgender people who survive an attack by someone who panics in a sexual encounter gone sideways could be reluctant to seek justice.

"How can you come forward about a crime that has happened to you because of your identity ... when there is that option in a court of law that we can legally victim-blame?" Small asked.

She noted that the person who becomes violent often is panicking as much about himself as about his partner and sometimes has to ask himself, What does this mean about me?

The bill passed the House easily and is under consideration in the Senate Judiciary Committee. Sen. Joe Benning (R-Caledonia) is a defense lawyer; he has been leery of legislative interference with the decision-making power of judges and juries, and particularly the ability of judges to consider any mitigating circumstances at sentencing. Benning suggested that judges be allowed but not required to instruct jurors to ignore the panic defense. "I can't agree to a bill that is going to hamstring the judicial process from imposing a sentence that is appropriate for a given criminal defendant," he said.

That's not good enough for the bill's supporters. The approach could allow anti-gay or anti-transgender bias to creep into court proceedings, they say. And as Jessica Barquist, the director of policy and organizing for the Vermont Network Against Domestic and Sexual Violence, told the Senate committee, "It is never OK to say that a victim's identity is to blame for a defendant's violent reaction."

In the end, this should not be a close call. If you can close the door in Vermont against a type of bias that has shown up in courtrooms around the country, you do it.

One big exception to the generally high quality of the Senate committee's debate were the truly egregious comments Sen. Jeanette White (D-Windham) made during its April 2 discussions.

"What if I'm this nice white little woman and I get attacked by, or I think I'm getting — not attacked, but ... uh, a Black man is coming on to me, and I say that it just made me so nervous that I had to shoot him?" White asked.

Someone in the online meeting gasped audibly. White continued: "I mean ... or a guy from — with a motorcycle jacket on — was coming on to me, and I'm so afraid of motorcycle people because I know about the Hells Angels, so I had to shoot him. Aren't we going down some kind of a slippery path here...?"

By late last week, the reactions to White's comments were blowing up on Twitter. The tweets have been brutal.

Michael Harriot, a senior writer for the Root, a Black-oriented and socially critical online magazine, tweeted a picture of 77-year-old White with these comments: "I joke around on this app but I need to speak to the black men (especially if you own a motorcycle or a leather jacket)." He continued, "I know it's gonna be hard, but can you vow not to 'come on' to 'nice, white' Vt. Sen. Jeanette White? She'll vote against shooting trans people if we promise."

White complained that her comments were taken out of context. But go ahead and watch the brief clip on Twitter or the entire committee meeting on YouTube. White's comments are offensive either way, in or out of context.

A week after her remarks, and after being lacerated in more than 100 tweets, emails and other communications, White issued an apology of sorts during a Senate Judiciary Committee meeting.

"Over the past few days, I've received numerous emails and phone messages, some of them pretty vitriolic, accusing me of being racist, homophobic and in general not a good person," she said. "First, let me apologize to anyone I offended for anything I said. My comments and questions were not meant to be hurtful, nor offensive."

She should have stopped there. But instead White went on, effectively erasing her apology by trying to excuse her earlier comments.

"As legislators, we need to examine all aspects of proposed laws for consequences we may not anticipate," she said. "That might mean asking questions that, when taken out of context, seem inappropriate. As an example is this one single sentence that has been pulled out of a question that I asked, that has been used in form letters sent to me as proving that I am racist."

In other words, "Poor me, I'm being taken out of context and labeled a racist."

White continued, "Without going into the weeds, I believe what I was trying to wrap my head around was ... should a prohibition of the panic defense be broadened to include more than just gender? ... As we grapple with important and complex issues, we must be able to ask questions that might seem inappropriate or hurtful when taken out of context. If we can't, we cannot continue to learn and grow, and our legislation will not be the best it can be."

In an interview, she added, "When I made that comment about being a nice little white lady, what I was trying to do was determine whether, if we were going to prohibit this kind of defense to be used, should it be limited to gender identity, or should it be extended to also include other identities."

OK, maybe what happened was that White butchered a legitimate question. She could have asked something like, "What if you have a racist white woman who panics when a Black man tries to talk to her and she shoots him? Should we extend this ban on the panic defense beyond cases of sexual bigotry and cover racial bigotry, as well?" Using the third-person would have helped a lot. Instead, White used the words "I'm" or "I" six times and "me" twice in the first sentence of the comments that caused so much grief.

One person not accepting her apology was James Lawton, the husband of former Vermont state representative Kiah Morris of Bennington. Morris, who is Black, resigned in 2018 after she and her family were racially harassed. White forwarded Lawton's email to Fair Game. Lawton later said his wife didn't know he was emailing White.

"It does not matter if you think it was perceived wrong or that it is 'not what you meant,'" Lawton wrote to White. "This is how a prominent black man who is the senior writer for TheRoot.com perceived what you had to say! And trust me he is not the only person of color that already received your message that way."

Lawton continued, "As a white man born and raised in Vermont and lifetime, black leather jacket, Harley Davidson motorcycle rider, who has had no association with anything unlawful, I am also taken back by your statement. But as the husband of a black woman and father to a black son, [I have] seen clearly in the state of Vermont how white progressive democratic people are one of the state's largest problems when it comes to racism!"

"You have become the clearest example of that deep racial bias that makes 'Nice white ladies' historically dangerous to Black Men," Lawton concluded. "There is no apology acceptable except one made along with your immediate resignation!!"

Here's my call: White's comments employed the racist trope of a "nice white little woman" confronted by a potentially dangerous Black man. Anyone with an ounce of understanding of America's history knows this is an entirely polluted well and to stay the hell away from it. Let's postulate that White was misunderstood — just long enough to say that when a speaker is 180 degrees misunderstood, sometimes it's on the speaker.

And she should have been much clearer and more contrite in her apology.

Despite all that, I don't think White should resign. I've watched her work in the Senate for nearly 20 years and have never heard remarks like these from her before. As chair of the Senate Government Operations Committee, she has taken progressive stances on issues that touch on race. Just this year, she has supported the expansion of voting rights and voter access. Last Friday, she reported favorably on an amendment to the state Constitution to make it clear that its ban on slavery applies to people of all ages.

After White's apology, Judiciary Committee chair Sen. Dick Sears (D-Bennington) thanked her. "Having worked with you for many years, your heart is always in the right place, and I don't think there's any one of us who haven't said things that can be misconstrued," he said.

The best part of what White said was about her desire to learn and grow. We all need to do that, myself included. The only way for that to happen is if we keep everybody in the conversation, and banish no one.

I wrote on March 23 about the departure under pressure of Chea Waters Evans from her post as sole editorial employee of the Charlotte News, as well as an uprising of a small cadre of national and international journalists who had settled in town. That was all in response to what appeared to be small-town politics infecting the paper's operations.

"Our goal is to operate completely transparently: from our bank account to our conflicts of interest, we're dedicated to bringing you unbiased and uncensored stories about small-town government and life — without small-town politics," Evans said in a written statement announcing the launch.

The original print version of this article was headlined "Capitol Offense | During a discussion of bias against LGBT victims, a senator invokes a racist trope"