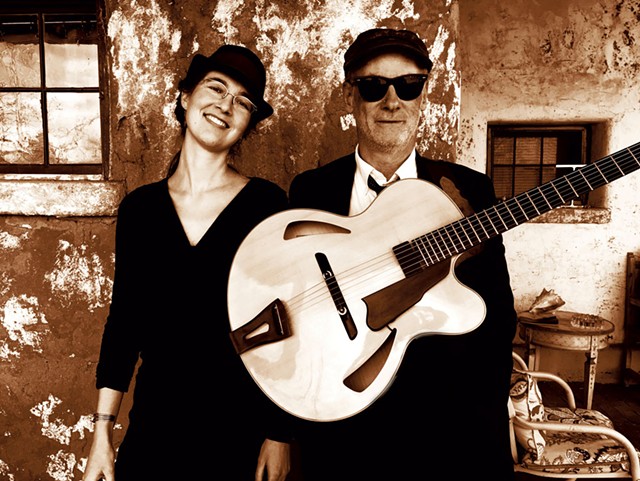 For about a decade, guitarist Max Hatt and vocalist Edda Glass plied their trade as "the only bossa nova band in Montana." As the duo traversed Big Sky Country, often driving hours from gig to gig, they penned original material inspired by both Brazilian jazz and the vast American landscape beyond their windshield. In 2014, those car tunes took the grand prize at the prestigious NewSong Music Competition at Lincoln Center in New York City.

The surprise win resulted in Hatt and Glass recording an album with Wilco's Pat Sansone. The record, Ocean of Birds, is a stirring hybrid of intimate jazz and pastoral Americana that Sansone's Wilco bandmate Nels Cline has called "subtly poignant, elegantly funky and haunting without trying to be." He added, "Edda Glass' voice must be heard to be believed."

Hatt and Glass kick off the 2019/20 University of Vermont Lane Series on Friday, September 27, at the UVM Recital Hall in Burlington. Seven Days recently spoke with the duo by phone.

SEVEN DAYS: So tell me about being "the only bossa nova band in Montana."

EDDA GLASS: We worked quite a bit, given we were a bossa nova band in Montana. It's a long distance between bossa nova gigs in Montana, so we ended up getting a lot of original writing done in the car. So, in an odd way, it led to our original music. And the landscapes along the way kind of found their way into our songs, as well. The conversationalism that is the bossa nova style is also a big part of our original music.

MAX HATT: Montana is a lot like Vermont in that it's a rural state, but you have these pockets of culture where educated and artistic people end up. So we found audiences that really dug Brazilian music.

SD: Your music exists at this crossroads of Brazilian jazz and Americana. Why is that such fertile ground for you?

MH: Our original music is very much an extension of some of that Brazilian bossa nova jazz. But, like you are what you eat, you are what you listen to. And we both listen to rock and folk and jazz and Brazilian music. So, for us, our original stuff is a similar aesthetic. It might not be in Portuguese, but it has the same feel, coupled with a sense of place and space.

EG: The intimate nature of our material might seem like a juxtaposition with the American West, which is so grand and majestic and big. But when you're out there in it, there's something about the bigness of the space that makes you want to pay attention to the people next to you. And, if you don't have them next to you, you're thinking about them across these vast distances. So there is a certain intimacy to being small in a big place.

MH: There's a lot of room for the imagination.

SD: What was it like working with Pat Sansone?

EG: Pat is just the greatest. We just recorded a new album and he mixed it for us.

MH: He's got big ears, listens to a lot of stuff and is very artistic. He really got what we were doing right from the get-go. He's been super supportive and has really become a friend.

SD: What can you tell me about the album?

EG: It's not out yet, but it's finished. It has a little bit more of a jazz influence, perhaps?

MH: Yeah. Genres are kind of marketing tools, and we really fall between the cracks with so many things. Folky jazz? Jazzy folk? We mix it up and come up with a really unique blend of things.

SD: Edda, you wrote lyrics to a John Coltrane song for the new record? How do you approach writing words to an existing song?

EG: You know, that famous old song "Stardust" didn't get lyrics for many years after it was out and circulating. So that's not unusual. But for me, it's the same thing we do for Max's songs. I like doing it in the car, so I'll put the track on, look out the window, and it'll be like a soundtrack to a movie and I'll just feel a story coming on. Music is very much like speech, so you'll just naturally hear little snippets of dialogue — the melody rises and falls like questions and answers — and things just occur to you.