When he was a kid, Urian Hackney would wait outside his father and uncle's rehearsal space trying to build up the courage to ask whether he could play the drum kit. "I was pretty young, so I was really shy," he recalls. "It was this project studio they'd built in the garage, and I'd just sit outside the door psyching myself up and giving myself these little pep talks, like: 'OK, I'm going to go down there. And I'm going to ask to play drums. I'm going to do it!'"

Hackney breaks into a wide, infectious smile as he sits in the sun on a park bench just outside his studio in Burlington's South End. As a musician and an engineer, his stock is rising astronomically, so to revisit where it all began is especially poignant to the 29-year-old Underhill native.

"In my mind, that was the beginning, or the focal point, of it all," he says. "I hated drawing attention to myself back then, but I just wanted to play the drums so fucking bad."

His wish was granted, and then some. In the space of a few years, Hackney went from dreaming of playing with his older brothers to being one of the most in-demand drummers in the country. He's now playing onstage and on records with some of the idols of his youth. And equally sought after are his talents as a recording engineer.

The broad strokes of Hackney's story are well known as a result of the 2012 documentary A Band Called Death. The film told the tale of his father, Bobby Hackney, and uncles Dannis and David Hackney, who in 1970s Detroit formed proto-punk act Death. The New York Times hailed the band as "punk before punk was punk."

As detailed in the film, neither Urian nor his older brothers Julian and Bobby Jr. had any clue as children of their punk pedigree. After finding out, as young men, the three brothers formed what is now one of Burlington's hottest bands, Rough Francis.

"What's funny is, we didn't have an idea about Death, but we were all already playing in bands and listening to hardcore and skating," Hackney says. "By then I was old enough to play with Bobby and Jules. They weren't just these older, untouchable dudes to me anymore, but my brothers."

"I've always been blown away by Urian's musical abilities," Bobby Jr. writes in an email to Seven Days. "Even as a little kid, his ear was like a tape recorder. He's always had this unique gift of picking out that thing which makes a song recognizable."

Bobby recalls seeing his two younger brothers play in a local punk group called Punch Out and having a revelation of sorts.

"In the back of my mind, I always knew that he, Julian and I would form a band together," he continues. "It was all about the timing."

Rough Francis have released three full-length LPs on multiple labels and earned a reputation as ferocious live performers. Last year, they turned up on the Tony Hawk Pro Skater 1 + 2 video game soundtrack and recently were featured in Thrasher Magazine. Both were especially significant scores for three guys who grew up skateboarding religiously.

That was only the start for Urian Hackney, however. His voluminous local credits as a recording engineer and player include artists such as Caroline Rose, Western Terrestrials and Lake Superior. He's done remixes for scores of Vermont musicians, as well, such as making a dub version of singer-songwriter Marcie Hernandez's track "Light a Torch."

Hackney's trademark pounding energy on the drums has led to more opportunities outside the Green Mountains, and in ways his teenage self never would have believed. After Converge drummer Ben Koller was injured, the hardcore punk legends asked Hackney to step in on their 2019 tour.

"It was incredible, man," he recalls, shaking his head. "It was like a Make-A-Wish Foundation kind of moment. Converge are one of my favorite bands, ever since I started skating and listening to hardcore. And now I'm in Converge for some shows? What?"

Shortly after that, Hackney joined Converge guitarist Kurt Ballou's other project, art-house hardcore act the Armed. That band, a supergroup of sorts with a sometimes rotating membership, released its third full-length LP in April, the critically acclaimed ULTRAPOP. The Armed, which currently also includes Troy Van Leeuwen from Queens of the Stone Age and Chris Slorach from Canadian punk rockers METZ, will embark on a tour in 2022. It will include Barcelona's Primavera Sound festival, whose lineup is, frankly, bonkers.

Hackney admits that playing with Converge and the Armed is "crazy," but his relationship with Ballou goes deeper.

"Kurt is kind of my engineering idol," he says. "The way his records sound, that's the way I think records should sound."

The two connected online after Ballou was in Burlington one night on tour and saw Hackney drum in a hardcore band called Alive & Well.

"The band was great," Ballou remembers in a phone call. "But the thing that really struck me was that, at some point, the main side of Urian's double bass drum had broken, so he was just doing everything with his left foot. And he was having a great time doing it! Most drummers would be losing their minds, but not Urian. He didn't have a care in the world."

Soon after, Ballou invited Hackney in on a session he was engineering for former Outkast star André 3000.

"André never showed up," Hackney recalls, laughing. So, he and Ballou hung out at Ballou's Massachusetts studio, God City, recording and talking music. "And the more we hung, the whole façade of the hero thing slowly faded away, until he was just this cool dude and we were working together all the time," Hackney recalls.

"Urian is an amazing musician," Ballou says. "And he's always up for working on stuff. But mostly we just talk about corny '90s movies."

That relationship has helped propel Hackney's work as an engineer to new heights. With no gigs during the pandemic, he became a one-man entertainment machine, going viral several times with covers and parodies.

Hackney's reworking of Nirvana's "Stay Away" into the quarantine-centric "Stay Inside" highlighted his ability to re-create classic sounds and tones faithfully. It also caught the attention of the surviving members of Nirvana, who retweeted the video with their stamp of approval. Cardi B parodies followed, as did a duet with Tony Hawk on the Damned's "Smash It Up."

"Urian Hackney is one of the most talented humans I have ever met," Ezra Oklan writes in a text. He plays drums with local indie-soul outfit Dwight & Nicole; fronts his own rock band, Matthew Mercury; and, like Hackney, is also a recording engineer. "You want him at the helm when recording, and you want him behind the kit," Oklan continues. "Or the bass. Or the guitar. There's a lot under the hood with Urian."

A by-product of Hackney's isolation-fueled projects is that the extra time spent with his gear helped him develop greater ability as an engineer, along with a sense of confidence and purpose.

"This is absolutely what I'm going to do for the rest of my life," he says. "I don't promote my studio or even have an internet presence for it. If someone likes what I do, they'll reach out. And if I like them, I'll reach out. I'm just going to play and make music. It's really as simple as that." 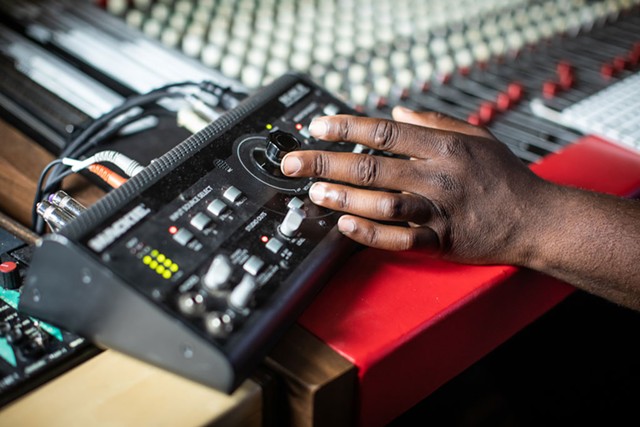 With his services so in demand, what becomes of Rough Francis? After releasing last year's bruising Urgent Care, the band has gone through a turbulent patch. For one, the pandemic made it impossible to effectively promote that album. Then bassist Dan Davine, the only non-Hackney and only white person in the band, was alleged to have attended the January 6 insurrection in Washington, D.C., where rioters stormed the U.S. Capitol.

Upon that revelation, Rough Francis fired Davine. The band posted on Instagram: "Rough Francis is first and foremost a Black punk band. So when we heard that our bass player, Dan Davine, held views rooted in white supremacy and had attended the terrorist insurrection at the Capitol, we took swift and decisive action to immediately remove him from the band."

Hackney is quick to move past the subject of Davine, focusing instead on the musical repercussions of Rough Francis losing their bassist. The band's initial plan was to become a three-piece, just the Hackney brothers and some rotating help.

"Yeah, we figured we would do the Tom Petty and the Heartbreakers thing," Hackney explains. "We sort of romanticized that for a bit. Now we just want a bass player, but adding a member during a pandemic was, um, problematic. We're going to need one soon, because me, Bobby and Jules have been writing.

"No matter what, Rough Francis will always be my priority," Hackney adds.

With that band ramping back up, upcoming shows with the Armed and his continued production work, Hackney has a full plate. Which is exactly how he likes it.

"I mean, this is why I do what I do," he says. Hackney takes a few moments to collect his thoughts, absently scratching his beard as he looks back toward his studio. "I love playing drums. I love helping people make their music better," he muses. "I like to collaborate. I don't need a limelight; that's why I play the drums. Like, I can't see myself making a solo record or anything like that, you know?"

A sly grin breaks out as he offers a parting thought.

"Life is weird, though," Hackney says. "Maybe I'll change my mind one of these days."