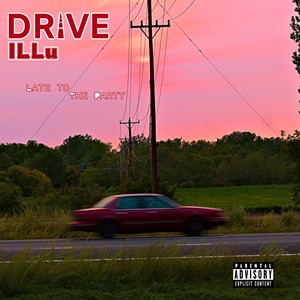 The pairing of Drive and ILLu was perhaps inevitable. Drive is a talented young rapper representing Lamoille County, and ILLu is a founding member of Burlington's foremost hip-hop label, Equal Eyes Records. Both are busy collaborators with an affinity for '90s underground rap, so the artists are a superb fit. But the problem with their new project, Late to the Party, is simple: This shit is too damn short.

That's both a compliment and an indictment ... but mostly a compliment. Every cut of the new release is a catchy slice of up-tempo rap, so as a teaser it definitely works. Yet even as a teaser, at just three tracks it's a pretty skimpy preview — about half an EP.

Fortunately, it's all tasty work. Things kick off with "Where You At?" It's a deliriously thirsty song about looking for love in which Drive ticks off a laundry list of the ideal attributes he seeks. Coming from an artist whose prior work was often somber and serious — whether self-analyzing his inner conflicts or penning earnest manifestos about "real" hip-hop — it's a surprisingly fun track.

What has always stood out about Drive are his relentlessly on-point flow patterns. Sure enough, every verse here is a showcase. "U Had Me" flips the script from self-deprecating jokes to savage attacks on rival rappers. Fittingly, the cut also highlights his ability to juggle intricate patterns and creative slant rhymes, such as one glorious run that marries "Urkel kid" with both "hernia" and "shuriken."

However, Drive is a young MC and still finding his voice, so Late to the Party can be an uneven ride. Although this is his most vibrantly confident set so far, he has some maturing to do as an artist. Is Drive the tongue-twister mastermind who's "different like an isotope" or the awkward kid doing rap-by-numbers brags such as, "Hit the pussy good, Imma kill it?"

That's the question at the core of "Calories," the closing track. "Sometimes I like to educate and like to innovate," he spits on the hook. "Other times it's more fun to put rappers on my dinner plate." Even on a short project with zero filler, this is his strongest showing and a perfect finish.

Drive's easy charisma on the mic almost manages to disguise what a flawless victory Late to the Party is for producer ILLu. Not only are the loops bright and hypnotic, these tracks are all beautifully produced, full of subtle touches that enhance the songwriting and keep your ears engaged. It's clear that ILLu's next round of material, no matter with whom he works, will be his best to date.

The question any listener will be left with is: "What's next?" And, of course, "When will that full meal be ready?" The brevity and power of Late to the Party makes you wonder how many more rounds Drive & ILLu have left in the clip. Their chemistry is dynamite, urgent and fresh in equal measures. We need more, and we need it soon.

Late to the Party will be available on March 12 at equaleyesrecords.bandcamp.com.