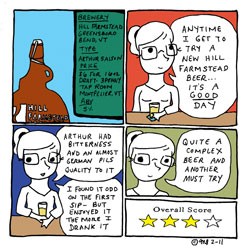 Emily Sauter takes a slow sip of the dark, amber-colored froth in her glass. She looks a little disappointed. “It tastes sort of … waxy,” she says, puzzled.

She offers me a taste. I’m not sure I detect wax, but I’m not transported, either. To my amateur beer palate, the single IPA is bitter but lacking in other flavors. Yet I suddenly worry about the brewer, because any new brew that meets Sauter’s tongue is destined to be immortalized in ink.

We’re at Montpelier’s Three Penny Taproom on a busy Thursday night. It’s one of Sauter’s favorite places on the planet, the place where her boyfriend took her on their first date. The place where she hopes to work someday, maybe, on her way to becoming a cicerone, or beer sommelier. It’s also the place where she samples some of the beers that end up in her blog, Pints and Panels: Beer Reviews in the Sequential Tradition.

“I’m the only beer cartoonist, I think,” says Sauter, sampling my Ommegang Chocolate Indulgence. “I don’t know why there aren’t more review comics.”

A few times a week, Sauter, 27, takes out her pen to render her tasting adventures in a four-panel cartoon. The first panel lists brewer, type, price and alcohol content. In the second, a cartooned Sauter appears as a pony-tailed girl with square-rimmed glasses and oversized pupils, holding up her glass and saying things such as, “I would marry a Witbier if asked,” and “Oh, Ommegang, is there nothing you can’t do?” She’ll then rate the flavor using a four-star system.

Sauter’s depiction of herself is not far off (sans dilated pupils): she also has milky skin and an easy smile. She’s friendly and direct, almost like an American lager, though she probably wouldn’t like that comparison. Saisons, porters and märzens are more her style.

“I never wanted to drink Miller High Life or Bud Light,” says Sauter of her initial beer adventures in her early twenties. After graduating from Bard College and working as a sports reporter at a small newspaper, Sauter moved to the Boston area. As providence would have it, she ended up living a short walk from the renowned craft-beer bar Sunset Grill & Tap. Working as a janitor at Fenway Park and, later, as an executive assistant at a financial firm, Sauter hung out at local beer fountains such as Deep Ellum. It’s a familiar life for many Boston twentysomethings.

Through a friend, Sauter found out about the Center for Cartoon Studies in White River Junction. She had been casually cartooning since she was a child, and at Bard had drawn a strip called “Adventures in Bardland” for the school newspaper. “I went home, looked up [CCS], and the moment I saw it I knew I had to go there,” she says. The school had just launched a master’s of fine arts program.

Sauter raced to put together a worthy portfolio. Her anxiety was groundless. “I was really surprised I got in,” she says. “I’ve never been confident in my style” — which she describes as “the same U-shaped head with big eyes.”

Sauter moved two hours north, to the relative sticks of White River Junction, in August 2009. Now nearing graduation, she seems awed by how much her style has evolved, and describes her instructors with words such as “amazing” and “wonderful.”

Sauter is less fawning about the town where she lives. She breaks the populace of White River down into two camps, townies and toonies, and believes that without the latter it “would be a boring town.”

Last spring, she had an epiphany: She would combine her passions by reviewing beer in ink. Sauter’s boyfriend came up with the blog name, and she posted her first review in May 2010.

After admitting she’d chosen the beer for that first panel, Ayinger Ur-Weisse, because it was “very cheap,” Sauter gave it three stars. Her reviews began to pour out at the rate of three a week. The cartoon Emily avoids terms such as nose, lacing or sediment; she calls her beers dull, fragrant or crisp, or compares them to rubber, vinegar, Halloween.

Sauter awarded her first-ever four-star rating in June, to Saison de B.U.F.F.: “If God drank beer, he would drink this,” she wrote. To achieve the highest honor, Sauter says, a beer needs to hit all the right notes. “It has to have this perfect balance. It’s like love at first sight: The moment you drink it, you know.”

Her only zero-star disappointment came in October, after she sampled Shipyard Smashed Pumpkin Ale. (“I don’t want to drink a pie. Stay away from this beer!”)

Sauter will graduate this May with more than 100 panels and a cartooning MFA under her belt. With an “infinite” number of beers to go, she has set a drinking rule: She can only order pints she has not yet tried, or those to which she has assigned three and a half or four stars.

Besides blogging, Sauter writes articles for the website cheersforbeers.com, and she envisions one day staffing the Three Penny taps while working toward her cicerone qualification. “I want to do this until I’m old and in the grave,” she says.

We sample another beer, a saison, also from Hill Farmstead. Sauter is impressed, calling it “complex,” with “an almost German Pils quality.” Cartoon Emily will eventually give it three stars.

Almost great, but not quite — by virtue of her own rules, she won't be having another pint.